Betty White and other 90-something stars


Nonagenarian - A person whose age is in the nineties. 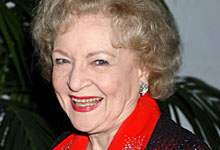 I watched Betty White at the People's Choice Awards recently.  All I can say is that when I am 90 years old, I hope to be as energetic and vibrant as she is.  Betty Marion White was born in Oak Park, Illinois on January 17, 1922.  Today she celebrates her 90th birthday.  Happy Birthday and congratulations to the star of Hot in Cleveland!

Marjorie Lord, who played Danny Thomas' wife Kathy on Make Room for Daddy from 1957 until 1964, is 93 years old.  She was born Marjorie F. Wollenberg on July 26, 1918 in San Francisco, California.  On May 8, 2008, she took part in a panel discussion organized by the Academy of Television Arts & Sciences which was called "Salute to Television Moms."  In real life, Marjorie is the mother of actress Anne Archer of Fatal Attraction fame.

Lord has written a memoir entitled A Dance and a Hug.  You can check out her website at http://www.marjorielord.com/


Oscar-winning actor Ernest Borgnine was born Ermes Effron Borgnino on January 24, 1917 in Hamden, Connecticut.  Borgnine, who starred as Quinton McHale in the television comedy McHale's Navy from 1962 until 1966, is just days away from his 96th birthday.

Borgnine also co-starred in a 1980s action series Airwolf.  In 1992, at the age of 92, the actor earned an Emmy nomination for his performance on ER.  Have a happy 96th, Ernie.


Actress and singer Nanette Fabray is 91 years old.  She was born Ruby Bernadette Nanette Fabares on October 27, 1920 in San Diego, California.  Her television performances with Sid Caesar in 1954 and 1955 earned her three Emmy Awards.  In 1961, she played the role of Broadway star Nan McGovern in her own sitcom, The Nanette Fabray Show. From 1979 until 1984, Fabray portrayed Katherine Romano, the mother of Bonnie Franklin's character, Ann Romano, on One Day at a Time.

Nanette has been legally deaf for many years and has campaigned vigorously for the betterment of the hearing impaired in the United States.  She is the widow of screenwriter/director Ronald McDougall, who died in 1973, and the aunt of singer/actress Shelley Fabares.


Phyllis Diller was born Phyllis Ada Driver, on July 17, 1917 in Lima, Ohio.  The comedian is 94 years old and still active.  In fact, TV Guide Magazine has reported that the nonagenarian firebrand is set to make a two-day appearance on The Bold and the Beautiful in March, just in time for the CBS soap opera's 25th anniversary.

Diller will reprise her role as Gladys Pope, a wild and impetuous make-up artist.  The character was seen many times on the show between 1995 and 2004.  According to TV Guide, The Bold and Beautiful has not announced the exact dates of Diller's appearances, but has revealed that "Gladys will be back with a whole new vocation and will play an integral part in a very romantic event - one that's timed perfectly for the soap's 25th anniversary."


Jack Klugman of The Odd Couple and Quincy, M.E. will turn 90 years old in April of this year.  He was born Jacob Joachim Klugman in Philadelphia, Pennsylvania on April 27, 1922.

Ernest Borgnine passed away in Los Angeles, California on July 8, 2012 at the age of 95.

Phyllis Diller died at her home in Brentwood, Los Angeles, California on August 20, 2012.  She was also 95 at the time of her death.

Marjorie Lord passed away at her home in Beverly Hills, California on November 28, 2015.  She died of natural causes at the age of 97.
Nanette Fabray passed away on February 22, 2018 at the Canterbury Nursing Home in California.  She was 97 years old and she died from natural causes.

The reader says that James and his wife, Renee (nee Nash), are not divorced.  They currently reside in Durango, Colorado where they own a lakeside cabin that they rent out.  It's called "The Blue Water Lodge."  Their son, James Nash McNichol, goes by his middle name, Nash.  Nash is a freshman at Animas High School in Durango.

Apparently, James McNichol is completely removed from the entertainment industry.

My thanks to the reader.  Keep the banter coming!  I want to provide you with the most accurate information possible.