Benjamin Evan Ainsworth is the Son of a Critch

The CBC has renewed Son of a Critch for a second season.  I viewed the first season and enjoyed it immensely.  Son of a Critch is an original comedy based on comedian Mark Critch's award-winning, best-selling memoir Son of a Critch: A Childish Newfoundland Mermoir.  The TV series was created by Critch, along with Tim McAuliffe, a Montreal-born comedy writer and television producer. 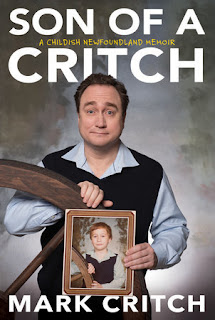 Critch, a native of St. John's Newfoundland, is known as a co-host of CBC's 22 Minutes, which features political and social satire as well as comedy sketches.  In Son of a Critch, he serves as narrator and portrays his own father, Mike.  The cast also includes child actor Benjamin Evan Ainsworth, who portrays Mark as a boy,  P.E.I. actress Claire Rankinplays as his mother, Mary Critch, veteran actor Malcolm McDowell as his grandfather, Patrick "Pop." Critch and Colton Gobbo as his older brother, Mike Jr.
Below is a photo of the cast:  From left to right - Claire Rankinplays, Mark Critch,  Benjamin Evan Ainsworth, Colton Gobbo and Malcolm McDowell. 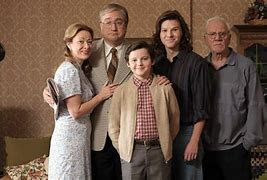 I've been particularly struck by Benjamin Evan Ainsworth's performance as the young Mark Critch.  After watching his portrayal of Mark as a schoolboy in the Newfoundland of the 1980s, you'd never guess that Benjamin is really a Yorkshire lad who prefers rugby to hockey. and Liverpool FC tickets for life to free concert ticket.  On Son of a Critch, you don't hear a trace of the English accent he displays off the show.

Benjamin was born in Nottingham, East Midlands, England on September 25, 2008.  He is being raised in Yorkshire and he attended the Northern Lights Theatre Drama School in Hull.  For one so young (he is about a month shy of his 14th birthday), Benjamin has an impressive list of acting accomplishments to his credit.  In 2018, when he was ten years old,  Hw made his first appearance on British television, on the ITV soap opera Emmerdale.  That same year, he appeared in a production of Priscilla, Queen of the Desert on board the Norwegian Epic cruise liner and has portrayed major characters in professional and musical stage productions.

Benjamin played Jacob in the award-winning short film The Recycling Man (2020).  He starred in the the limited Netflix series, The Haunting Of Bly Manor (2020) as the deeply troubled orphan, Miles Wingrave, for which he earned critical acclaim.  He also voiced the lead character in the 2021 Disney live action remake of Pinocchio, opposite Tom Hanks.  His first film credit  was the 2021 Disney+ film Flora & Ulysses.

Son of a Critch is a coming-of-age comedy.  It chronicles young Mark's experiences as he attends a Catholic school St. John's.  The boy is faced with many challenges, including a somewhat dysfunctional family.  He also has to deal with being bullied by members of the red-headed Fox family.  However, he has the companionship and support of his best friend, Ritchie Perez (Mark Ezkziel Rivera), the son of of an immigrant Filipino family.

In a Vibe Check YouTube video, Benjamin answers some rapid fire questions.  When asked to describe his Son of a Critch character in three words, Benjamin replies "Heartfelt, witty. ..  and old."  He says that young Mark is "11 going on 60" and "is older than his years."

In the video, Benjamin reveals that his favourite movie is Forrest Gump and that he prefers tea to pop.  He says  that his favourite subject in school is Latin.  He jokes that although it's been called a dead language, "it's still Roman around."

Benjamin also has some advice for young actors: "You know, just keep at it, and if you really like it,  and you really enjoy it , and you want to keep doing it, then just show that bravery and courage until you find your lucky break."

Benjamin  Evan Ainsworth is a busy young actor  In addition to his Son of a Critch role, he portrays Alex Burgess in David S. Goyer's epic Netflix fantasy, The Sandman.  In his spare time, Benjamin plays rugby and hockey, and he is a devoted Liverpool FC fan.  He also enjoys singing, songwriting and playing the drums.  Benjamin will soon be celebrating his 14th birthday - on September 25th.  After watching his work, all I can say is that this kid is going places.  He appears to have a bright future ahead of him

Posted by Joanne at 1:47 AM No comments:

Keeping Up with Johnny Gilbert of Jeopardy! 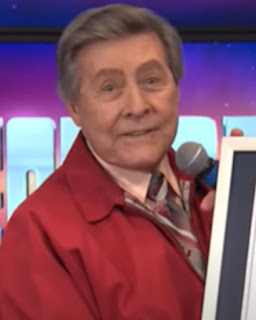 "Nobody keeps an audience engaged like Jeopardy!’s resident entertainer, Johnny Gilbert. Over the span of his career, Johnny has done it all, from performing in nightclubs and as a recording artist, to entertaining movie and television audiences. So much more than the voice of Jeopardy!, Johnny’s a true Hollywood showman."

I've been a fan of Jeopardy! for a while now, but I have to admit that I didn't know much about the show's announcer, the affable Johnny Gilbert - until recently.  I was somewhat surprised to discover that Johnny is a nonagenarian.  He is 94 years of age but his voice sounds much younger.  It is extremely clear and resonant. Nobody can say "This is Jeopardy!" the way Johnny does.  As Mike Richards, former executive producer of the show put it, "If you just listen to the way Johnny articulates each name, each word, he has a voice and even more importantly, delivery, unlike anyone else."

John Lewis Gilbert III cam into the world on July 13, 1928.  He was born and raised in the coastal city of Newport News, on the banks of the Hampton Roads harbour, a short distance from Virginia Beach and the Atlantic Ocean.  Johnny's grandmother was a church singer and Johnny followed in her footsteps.  He sang in the choir of a Lutheran church in his hometown.  While a student, at Morrison High School in Newport News, Johnny studied opera and tried to launch a career as a professional singer.  He performed vocals with Shelley Harmon and His Orchestra, a dance band that toured around Virginia.

A few years after graduating from Morrison High,, Johnny spent some time working in a Jacksonville, Florida nightclub as an emcee, a comedian and a singer.  It was there that he learned the art of public speaking and storytelling.  Before his first emcee gig, Johnny didn't really know what being a Master of Ceremonies entailed.  A local manager, however, didn't seem to mind Johnny's lack of experience.  He helped him hone his skills and showed him the ropes.  "He taught me how to introduce people on the stage and take them off the stage," Johnny told Outsider in 2021.
In those early days of his career, Johnny toured the U.S. as a singer/emcee and he also joined a group of young actors called the Dead End Kids.  The group organized a revue which played the southwestern United States for over a year.
In the 1950s, Johnny also travelled trough Western Europe, entertaining soldiers and civilians alike, as a member of the United States Army's Special Services.  After leaving the service, he continued hosting and performing.  He eventually agreed to emcee and sing on a radio station in New Orleans.
In the late 1950s, Johnny moved to New York City and signed with the William Morris Agency in order to pursue a career as a game show host.  In 1958, he became the host of ABC-TV's Music Bingo.  It was his first exposure on national television.  He then went on to host a local Lost Angeles game show called Words and Music.
In the 1960s, Avco Broadcasting gave Johnny the opportunity to hist his own 90-minute talk/variety show, The Johnny Gilbert Show, which aired on WLWD-TV (now WDTN)  in Dayton, Ohio and on three other Avco stations in Ohio and Indiana.  The show had a 60-person studio audience and celebrity guests.  After two years, however, Johnny returned to New York to become the host of a game show called Fast Draw.  It is interesting to note that Johnny was replaced on the Dayton show by an up and coming WLWD-TV news reporter named Phil Donahue.
After a year with Fast Draw, Johnny was invited by Bing Crosby Productions to host a game show called Beat the Odds, which was produced in Los Angeles.  It ran from 1961 to 1963, after which Johnny moved on to host a weekday version of Dialing for Dollars on a local Los Angeles station.
In 1963, TV producer Mark Goodson chose Johnny to replace Don Pardo as the announcer and audience host for the original version of The Price is Right on ABC, which was hosted by Bill Cullen.  Johnny also served as announcer and audience host for Dinah Shore's syndicated daytime talk show, Dinah!, from 1974 to 1980.
In 1984, Merv Griffin's quiz show Jeopardy! was reintroduced as a syndicated daily program hosted by Alex Trebek.  Alex, who had met Johnny at a Hollywood dinner party in the early 1980s, was impressed with Johnny's voice and recommended that Merv hire him as the show's announcer.  In his memoir, published in the summer of 2020, Alex wrote: " How could you forget a voice like that?"  The two developed a friendship that involved mutual respect and some good natured banter in dressing rooms and in front of the studio audience.  Alex would tease Johnny about his age, joking that he had been the announcer for Abraham Lincoln.
Following the death of Alex Trebek in November of 2020, Johnny considered retirement but decided to continue with the show.  The duo worked together for 37 years and Johnny told People magazine that "Everyone's walking around in a fog, shaken from the whole thing.  Part of me left here when Alex left."
At the time of Alex's passing, Johnny had not been working at the Sony Pictures studio in Culver City, California, where Jeopardy! is filmed.  Due to the COVID -19 pandemic, he had been recording his announcements from his home in Venice Beach.  In a January 2021 interview for The New York Times, Johnny stated that when Alex passed away, he considered his future on Jeopardy!  "I thought, 'Gee, can I go on doing this?  Can I still do what the show needs?  And I decided, yes, I would go on.  I would go on because Alex wanted the show to go on""
Johnny has been very private about his personal life.  In 1984, he married his wife Sheree but it has not been confirmed that the couple has any children.
END NOTES
* Johnny Gilbert had an uncredited role as Johnny Spring the 1961 film Gidget Goes Hawaiian, starring Deborah Walley and James Darren.
* Aside from Jeopardy! and The Price is Right, Johnny's best know announcing duties include The Joker's Wild (1972), The $25,000 Pyramid (1982), Supermarket Sweep (1990).  He has also served an an announcer for numerous television awards shows, Dick Clark specials and Circus of the Stars specials.
* Johnny recorded two albums in the 1960s.
* In the 1990s, Johnny filled in as guest announcer on Jeopardy!s sister show, Wheel of Fortune.
* In 2017, Guinness World Records paid tribute to Johnny for having the longest career as a game show announcer for a single show - 32 years with Jeopardy!
SOURCES: Jeopardy! website, Johnny Gilbert's biography; Outsider, "'Jeopardy!' Legendary Announcer Johnny Gilbert's Winding Road to Working with Alex Trebek," by Chris Haney, June 4, 2021; The New York Times, "On Alex Trebek's Final 'Jeopardy!," a Last Introduction From a Friend," by Julia Jacobs; January 7, 2021  Wikipedia;; Internet Move Database (IMDb)
- Joanne
Posted by Joanne at 2:52 PM No comments: