Whatever happened to Erin Murphy (Tabitha on Bewitched)? 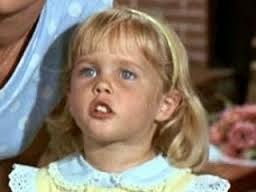 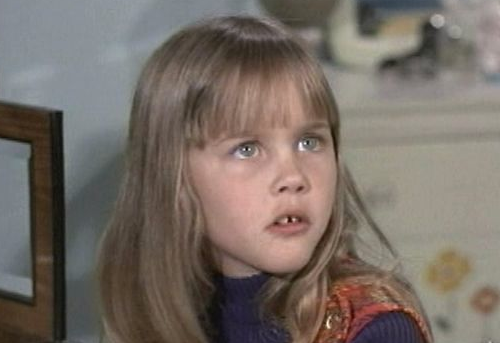 People still recognize me all the time! Bewitched is one of the few television shows that has never been off the air. We filmed in the 60s and 70s and we’ve been on TV ever since. I think the small amount of fame that I have is definitely a blessing. I’ve had wonderful travel and work opportunities because of being an actress on a popular TV show and people love the show, so they’re always pleasant when they approach.

- Erin Murphy
Interview with Douglas Cobb
In The Guardian Liberty Voice, May 6, 2014


Can you believe that Erin Murphy, who portrayed little Tabitha Stephens on Bewitched, is almost 51 years old now?  It's true.  Unlike many former child stars, however, the actress does not look upon her years on Bewitched as a negative experience.  In a November 15, 1999 article in People magazine, she is quoted as saying, "Being a child star was a positive thing.  I have such good memories from doing the show."

Erin Margaret Murphy was born on June 17, 1964 in Encino, California, an affluent neigbourhood in the Fernando Valley area of Los Angeles.  She is the daughter of Dan Murphy, a financial investor who died in 1992, and his wife Stephanie, a homemaker.

Not long after her first birthday, Erin was featured in a detergent commercial with none other than former U.S. president Ronald Reagan. As a child, she appeared in numerous ads, sometimes competing with the likes of Jodie Foster and Helen Hunt for a part.  In 1966, prior to her second birthday, she began portraying baby Tabitha on the hit television comedy Bewitched, starring Elizabeth Montgomery as the loveable nose-twitching witch, Samantha, and Dick York as her befuddled advertising executive husband, Darrin Stephens.

Bewitched debuted in 1964, but Tabitha was born during the show's second season in an episode entitled "And Then There Were Three."  The episode aired on January 13, 1966. Baby Tabitha was originally played by Cynthia Black, Heidi and Laura Gentry, and Tamar and Julie Young.

At the beginning of third season of Bewitched, Erin Murphy and her fraternal twin sister, Diane, began sharing the role of Tabitha.  They first appeared in an episode entitled "Nobody's Perfect," which aired on September 15, 1966.  As time passed, the twins began to resemble each other less.  As a result, Erin eventually took over the role of the irrepressible child witch.  In that 1999 article in People, Diane denied that there was any sibling rivalry between her and her twin sister because "they had a lot of structure at home." 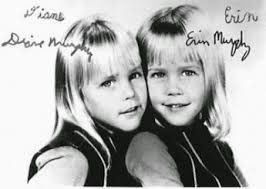 Erin is one of the few regular Bewitched cast member still alive  Her TV mother, Elizabeth Montgomery, died of colon cancer on May 18, 1995 at the age of 62.  The first Darrin, Dick York, died on February 20, 1992 of complications from emphysema.  He left Bewitched after season five due to severe back pain and addiction to painkillers.  From season six until the show went off the air in 1972, Dick Sargent played the role of Darrin Stephens. Sargent died of prostate cancer on July 8, 1994 at the age of 64.

Erin had a close relationship with Agnes Moorehead, who played Endora, Samantha's mother and Tabitha's grandmother.  Agnes died of uterine cancer in Rochester, Minnesota on April 30, 1974.  She was 74 at the time of her passing.

In an interview with Carl Amari on the website Reminisce, here is how Erin replied when asked to name her favourite actor on Bewitched:

I loved them all, but my favourite was Agnes Moorehead.  She was nothing like people may think. Everyone thought she was scary, but she wasn't scary at all.  To me, she was like a grandma.  I loved visiting her dressing room, which was all purple.  She was smart and funny and would draw me little cartoons.  I just loved her so much.  She was such a colourful and amazing person.

Paul Lynde, who portrayed Endora's brother,Uncle Arthur, passed away on January 10, 1982.  He was found dead at his home in Beverly Hills, California, and the coroner ruled the death a heart attack.  Lynde was 55 years old.

Maurice Evans, the English actor who played Samantha's father Maurice, died of heart failure on March 12, 1989.  He was 87.

Marion Lorne, who played sweet, confused Aunt Clara, Lorne died of a heart attack on May 9, 1968 at the age of 84.  Her death, at the age of 84, came just before production of the show's fifth season.

Alice Pearce, who played nosy neighbour Gladys Kravitz, died of ovarian cancer on March 3, 1966, towards the end of the show's second season.  Pearce was diagnosed with cancer before the show began and was only 48 when she passed away.  Her replacement on the show, Sandra Gould, died of a stroke at the age of 82, on July 20, 1999.

Mabel Albertson, who played Darrin's mother, Phyllis Stephens, died of Alzheimer's disease on September 28, 1982.  She was 81.

Twins Greg and David Lawrence portrayed Tabitha's younger brother, Adam Stephens, from 1970 to 1972.  Adam was born on an episode that aired on October 16, 1969.  The episode was entitled "And Something Makes Four."  He was only shown as an infant that season, and the baby who portrayed him was uncredited.

In the eighth and final season of Bewitched, there was an episode called "Adam, Warlock or Washout" (Season 8, Episode 14, Air Date: December 29, 1971.  In the episode, Adam had his "abilities" tested.  If normal, he was to be taken away from Samantha and Darrin.  Maurice intervened and helped Adam, but Adam later showed that he had powers all along.


Below is a picture of the brothers as they appeared on a talk show hosted by Vicki Lawrence.  David (left) is now known as David Mandal-Bloch.and Greg is now Greg Mandal.  They claim to be the sons of the late actor Tony Curtis, but Curtis never acknowledged them.  "Mandal" is their adoptive family's name.

In her interview with Carl Amari, Erin explained why she believes Bewitched has remained so popular after all these years.  She made the following comment:

If something is done well, whether it’s television, music or radio, it holds up over time. The show was well-written, we had a really great cast and director, and it was a high-quality production. I think it’s still funny today, and people still love it.


Although a mere eight years old when Bewitched ended, Erin Murphy took a hiatus from acting and lived a life away from show business.  She busied herself with such activities as being a Girl Scout and a cheerleader.  Then she attended San Diego State University for two years.


In 1994, Erin attempted to revive her career by doing the talk show circuit with other child stars such as Danny Bonaduce of The Partridge Family and Gary Coleman of Diff'rent Strokes.  However. as she told People magazine, it was not a good experience.  In comparison to the troubled Bonaduce and Coleman, Erin was highlighted as the child star who managed to avoid their problems.  She soon discovered that she "didn't want to be the poster child for good child stars."

Erin Murrhy has been married three times, divorced twice, and is the mother of six sons. She wed her first husband, Terry Rogers, on November 4, 1984, when she was just 20 years old.  Rogers, 40, owned a wood-flooring company.  The couple left California and moved to Tucson, Arizona.  In Arizona, Erin worked as a stunt double, a karaoke club hostess and a makeup artist.  She and Rogers had two sons: Jason (born 1985) and Grant (born 1988).  Their marriage, however. did not last, and they divorced in 1989.

After her divorce, Erin returned to California with her two young boys.  In 1993, she married her second husband, Eric Eden, a rock musician, and the pair settled in Newark, Delaware. That marriage lasted until 1998 and produced one son, Clark (born 1995).

Erin has been married to her third husband, Darren Dunckel, since May of 1998. They met in a bar on St. Patrick's Day and tied the knot two months later. Coincidentally, he has the same first name (although spelled differently) as her television father, Darrin Stephens. Strangely enough, Dunckel told People magazine that his sister teased him when he was a kid by calling him "Durwood," the name Endora used to put down her son-in-law, Darrin,

Dunckel, a financial executive, has been CEO at Atomic Paintball Inc. since 2012. He and Erin are the parents of three sons: Dylan (born 1999), Parker and Carson. Their son Parker has autism and Erin is devoted to autism-related charities.

Erin never planned to become an alpaca rancher.  She acquired alpacas as "pet therapy" to help her son, Parker, develop language skills.  “My son is autistic, and the alpaca is the perfect animal for him,” Erin declared in an August, 2013 article in the Santa Clarita Valley Signal.
The alpaca is a calm and docile, she told the Signal.

It is interesting to note that Erin's TV, grandmother, Agnes Moorhead, enjoyed knitting.  In the Signal article, Erin reminisced about how Agnes would knit on the set.of Bewitched.  "I thought it was only a hobby for grandmothers," she remarked.  “But it’s become really popular to knit on set, even with the young actors.”

Alpaca ranching suits Erin's needs.  She was looking for, a business that utilizes 100 percent renewable resources and supports the local economy. Her alpaca knitwear is also used to raise funds to promote autism awareness.


EDITOR'S NOTE (September 3, 2016): Diane Murphy played Tabitha in a 1968 episode of Bewitched entitled "Samantha Fights City Hall" (Season 5, Episode 9, Air Date: November 28, 1968). In the episode, Samantha tries to save a park from being turned into a shopping mall by one of Darrin's clients. Diane was four years old at the time.