TV Trivia For You #5


BRYAN CRANSTON BASED HIS PORTRAYAL OF WALTER WHITE ON HIS FATHER 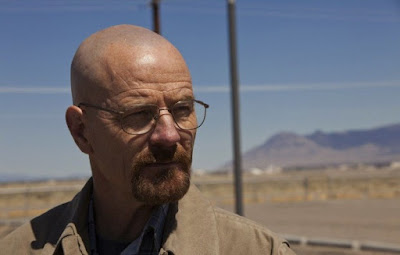 DID YOU KNOW that Bryan Cranston based his portrayal of Breaking Bad's Walter White on his own father, Joseph Louis "Joe" Cranston (born July 29, 1924).  In a May 26, 2014 article in GQ magazine by Stuart McGurk, the actor revealed that his dad provided the model for Walter White's slumped shoulders and hunched posture.  "I gave him the weight of the world," he told the magazine."

Of his Breaking Bad character, a chemistry teacher turned drug lord, Cranston stated that the early Walter was depressed and that he was a man "much older than his years, who had missed opportunities in life."  Joe Cranston, as characterized by his son in the GQ piece, seems to fit that description perfectly.

Joe was a boxer in his younger years and served as a Navy pilot in World War II. He later became an actor, appearing in some television shows during the 1950s and 1960s.  His television credits include Highway Patrol (1956), Father Knows Best (1956)), Dragnet (four episodes between 1953 and 1957) and My Three Sons (1961). Work was sporadic, however, and he often found himself unemployed.


When Bryan Cranston was about 11 or 12, Joe left the family.  It wan't  until he was 22 years old that he and his brother, Kyle, tracked their father down.  In a June 10, 2015 USA Today article by Bryan Alexander, Bryan is quoted as saying, "It's quite interesting, when he left I was a boy. When I reacquainted with him, I was a man. The entire chunk of my teenage years were gone.  There was a tremendous amount of contrition on his part and then forgiveness. It ran the whole gamut of emotions."

According to the USA Today piece, Joe Cranston died in October of 2014 at the age of 90.

BRYAN CRANSTON APPEARED IN A 1980s COMMERCIAL FOR PREPARATION H

DID YOU KNOW that in the 1980s, a young Bryan Cranston pitched Preparation H, a treatment for hemorrhoids, in a television ad?  As you can see, he was bespectacled and dressed in a suit.


DID YOU KNOW that Sammy Davis, Jr. appeared on three episodes of Mod Squad? His first appearance was during the show's first season in 1969.  He played the role of a militant priest, Father John Banks, in "Keep the Faith, Baby" (Season 1, Episode 23, Air Date (March 25, 1969).  The episode finds Father Banks in conflict with his diocese and is suspended by the Church due to his ghetto activities.  When a youth receives a bullet intended for the priest, the Mod Squad is immediately called into action.

It is interesting to note that an up-and-coming actor by the name of Robert Duvall also had a role in "Keep the Faith, Baby."  Duvall, who was 38 at the time, played the part of Matt Jenkins, a murderer who threatens the life of Father Banks because he fears the priest will break his seal of confession.

Sammy's second appearance on The Mod Squad occurred in 1970, during the second season of the series.  In an episode entitled "Survival House" (Season 2, Episode 19 Air Date: February 10, 1970). Davis portrayed a recovered drug addict, Billy Lee Watson, who becomes the director of a halfway house.  Watson is accused of statutory rape by the father of a girl who is drug-addicted and pregnant.

Sammy's final guest appearance on the series was during its third season.  In the fall of 1970, Davis played the title character, Willie Rush, an episode called "The Song of Willie" (Season 3, Episode 5, October 20, 1970).  The Squad is asked to investigate when Rush, an actor and old friend of Lincoln Hayes (Clarence Williams III), seemingly becomes the recipient of death threats.

In the course of my research on Sammy Davis, Jr.'s television credits, I came across a few interesting tidbits.

* In 1963, Sammy appeared as Eddie Phillips on the soap opera General Hospital. Also in 1963, he was a guest star on the television medical drama Ben Casey.  He played Allie Burns in an episode of the series entitled "Allie" (Season 3, Episode 4, Air Date: October 2, 1963).

* In 1965, Sammy appeared as himself in an episode of The Patty Duke Show entitled "Will the Real Sammy Davis Please Hang Up?" (Season 2, Episode 25, Air Date: March 3, 1965).  In the episode, Patty attempts to get Sammy to appear at her high school prom. 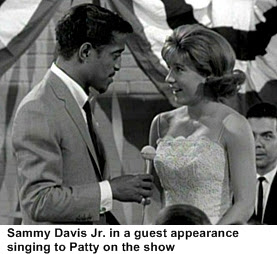 In 1967, Sammy portrayed himself in an episode of I Dream of Jeannie with Larry Hagman and Barbara Eden.  In the episode, entitled "The Greatest Entertainer in the World" (Season 2, Episode 23, Air Date: February 27, 1967), Jeannie works her magic so that a duplicate of Sammy can appear at a birthday celebration.


What is the most memorable Sammy Davis, Jr. television moment?  It is is undoubtedly the kiss Sammy planted on the bigoted Archie Bunker during an appearance on All in the Family in 1972. In the episode, entitled "Sammy's Visit" (Season 2, Episode 21, Air Date: February 19, 1972), Archie is moonlighting as a taxi driver.  When Sammy leaves his briefcase in the cab, he visits the Bunker house to retrieve it.  When the two are photographed, Sammy plants the kiss, much to Archie's shock and disbelief.  Now that's classic television! 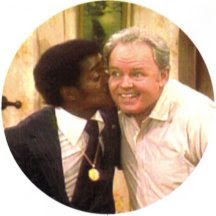