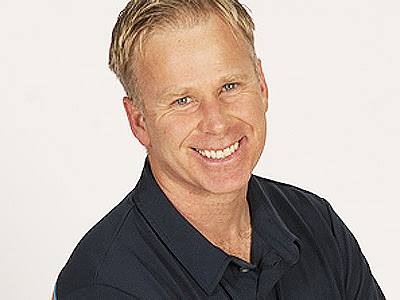 My dad always said that if someone makes fun of you, you laugh and agree with them - and it was the best trick ever.

Gerry Dee is a raspy-voiced Canadian comic whose humour has been compared that of an early Bill Cosby.  His comedy is clean and it strikes a chord with many, particularly his observations about educators and schools.

Gerry plays teacher Gerry Duncan on the hit CBC television series Mr. D.  Gerry is the creator, writer and star of the popular comedy set at high school called Xavier Academy.  Mr. D  premiered on January 9, 2012 to a large viewing audience and has run for two seasons.  According to the CBC, the show "shines the light on teaching from the teacher's point of view, and as it turns out, teachers don't know everything, especially Mr. D - who struggles to keep one step ahead of his students."

Gerry Duncan is certainly a different kind of teacher then the conventional television teachers of the past. He's definitely not an all-knowing and all-wise teacher.  He makes his share of mistakes and lapses in judgement.  His dithering and his disingenuity often get him into trouble

Gerry Dee, the man behind who portrays Mr. D, is the son of Scottish immigrants to Canada.  He was born Gerard Francis Donoghue in Scarborough, Ontario on December 31, 1968 and was later raised in the Willowdale area. of Toronto.  He attended high school at De La Salle College and then went on to study kinesiology at York University.

If Gerry Dee seems comfortable in the role of Gerry Ducan, it's because he actually spent a decade as a high school teacher.  After earning his teaching degree at St. Francis Xavier University in Nova Scotia, Gerry found employment back in Toronto at his alma mater, De La Salle College (shades of Welcome Back, Kotter).  He eventually became a physical education instructor and a hockey coach there.

Mr. D is actually based on Gerry's experiences as a teacher before he decided to devote himself full time to stand-up comedy and acting in 2003 (He started performing stand-up in 1999 and was the winner of Toronto's Funniest New Comic contest that year).

“The show idea kind of came from my first few years, teaching history and geography and not really knowing that subject matter,” the comedian is quoted as saying in a December 5, 2012 article by Winnipeg writer Jared Story.for Metro.  “What I did on those days to get through the day is where the funny comes from. I delivered it in stand-up first and then we started thinking about it as a show.”

In an April 2013 article for MoneySense Magazine, Gerry elaborated further on that period in his life.

Between teaching, hockey and comedy, 1999 to 2003 was a very busy time for me. However, I loved all three things I was doing, which made it more exciting. Then I had a decision to make: pursue comedy or pursue teaching and coaching hockey. I felt I had reached a stage in my stand-up comedy career where I could take a leave from my other jobs for one year. I had actually paid off all my debts, bought a condo and saved some money.

Gerry Dee moved to Los Angeles and remained there for a year and a half before returning home to Toronto.  In 2002, he won the first Canadian in 27 years to win the prestigious San Francisco Comedy Competition.  He made his debut on U.S. network television in 2003 when he appeared on CBS' Star Search with Arsenio Hall.  A year later, Dee performed on The Late Late Show with Craig Kilborn.

In 2006, Gerry appeared in the CBC mini-series Canada Russia 72 in which he played the role of Canadian hockey player Wayne Cashman.  The following year, he had the distinction of finishing third on the fifth season of NBC's Last Comic Standing, the highest standing by a Canadian in the history of the competition.


To watch Gerry perform his stand-up comedy routine on the Late Late Show with Craig Ferguson in 2012, click on the link below.

* Gerry Dee is the author of a book titled Teaching: It's Harder Than it Looks.  It was published by Random House in 2012.and it is filled with anecdotes about Dee's years as a teacher, the kind of teacher who loses his students' exams or suddenly decides to hold a baseball game during history class just to pass some time. Actually, it tells the story of a teacher very similar to the fictional Mr. D.  The book contains a forward by Gerry's fellow Canadian comic, Russell Peters. 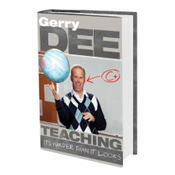 * Gerry and his wife Heather have two daughters, Faith Donoghue and Aly Donoghue. According to his CBC biography, Gerry divides his time between Los Angeles and Toronto.

* Gerry is a good golfer and in 2004 he appeared in the CBS Sports reality series PGA Tour 18: Golf's Ultimate Round.

* The CBC has renewed Mr. D for a third season.

Before Season 3 kicks off, viewers can enoy a hidden camera special, Gerry Dee: The Substitute, airing Monday, February 24  at 8 p.m.  Gerry disguised himself and went undercover as a substitute at King’s-Edgehill School in Windsor, Nova Scotia for a week.

EDITOR'S UPDATE (June 24, 2018): On March 11, 2018, Mr. D was renewed for an eighth season. Gerry Dee confirmed that this would the show's final season.  He stated via Twitter: "Hey all, Mr. D will be back for an 8th and FINAL season.  It's rare in TV to get a show let alone be able to decide when you want to wrap it up and I'm so thankful that CBC has allowed me to make this decision.  It feels like the right time.  So proud of what we did.  Thx!"