Captain and Tennille: Yes, they're still together - but The Captain is ailing 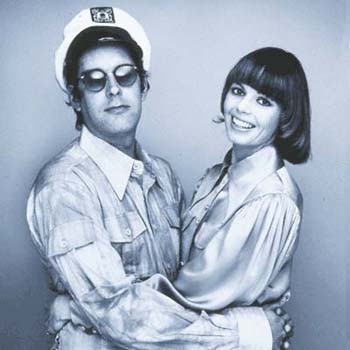 You remember Captain and Tennille, don't you?   He was extremely taciturn, barely said a word.  She was perky and talkative. They had some big pop hits back in the 1970s, the biggest being "Love Will Keep Us Together," a Grammy-winning song composed by Neil Sedaka and Howard Greenfield.

"The Captain," also known as Daryl Dragon, was born in Los Angeles, California on August 27, 1942.  His renowned father, the late Carmen Dragon, was the conductor of the Hollywood Bowl Symphony.  Daryl, a well-trained musician, is a master of all types of keyboard instruments.  He toured with The Beach Boys in the early 1970s as a keyboardist for the band.  It was Mike Love of The Beach Boys who nicknamed him "Captain Keyboard" because he always wore a nautical captain's hat on stage.

A shy man, Daryl struggled to overcome his shyness with the help of a drama coach.  His bug-eyed expression gives the impression that he is afraid and perplexed.  The truth is that he suffers from a congenital disorder and often wears sunglasses.

Cathryn Antoinette "Toni" Tennille is a Southern belle, born in Montgomery, Alabama on May 8, 1940.  She came from a family of entertainers.  Her father, Frank Tennille, was a big band singer with Bob Crosby and the Bob Cats.  His stage name was Clark Randall.  Toni's mother, Cathryn Tenille, hosted Montgomery's first daytime TV talk show.  Her three younger sisters, Jane, Louisa and Melissa, are also singers.  They sang on The Captain and Tenille's television variety show as well as on their recordings.

Toni studied classical piano and attended Auburn University in Auburn, Alabama where she sang with Auburn's big band, the Auburn Knights, as did her father  A tall woman with a rich contralto voice, she also sang backup vocals on Pink Floyd's "The Wall" and Elton John's "Don't Let the Sun Go Down on Me."

In June of 1962, at the age of 22, Toni wed her first husband, onetime rock drummer Kenneth Shearer.  The marriage was troubled from the start but they did not officially divorce until 1972.  Of Shearer, Tennille told People magazine in 1976 that he "is and was a lovely man.  But we both knew it was wrong almost from the first."  She regrets that she did not "shop around" more before marrying him.

Toni first met Daryl Dragon in San Francisco in the summer of 1971.  She was performing in Mother Earth, an ecology-based musical she had written and Daryl auditioned for her as a keyboardist.  She hired him immediately because, as she put it, "he made me laugh."  To reciprocate, Daryl later suggested that Toni be an additional keyboardist for the next Beach Boys tour.  She was hired, giving her the distinction of being the only "Beach Girl."

Toni and Daryl married on November 11, 1975 at the Silver Queen Wedding Chapel in Virginia City, Nevada.  The husband and wife team headlined their own hour-long musical/variety show in 1976-1977 and ABC hoped that they might become another Sonny and Cher.  It didn't quite work out that way.  Despite its popularity, their series, The Captain and Tennille, was short-lived.  Only 20 episodes of the show were ever made and Dick Clark produced the final eight episodes.

The Captain and Tennille's ratings were good enough to continue into a second season, no easy feat considering the competition.  The show aired at the same time as NBC's formidable Little House on the Prairie and two CBS comedies, Rhoda and Phyllis.  Toni and Daryl, nevertheless, chose not to continue with the series.  They opted to focus on their music and their concert tours instead of renewing their contract.

The duo's final network special, "Captain and Tennille: Songbook," aired on March 26, 1979.  It contains no comedy skits, just the musical artistry of country star Glen Campbell, jazz legend Ella Fitzgerald and blues icon B.B. King.  One of the highlights of the special is Ella and Toni's medley of torch songs.  To watch Toni's torch song medley with Ella Fitzgerald, click on the lick below.

Toni Tennille hosted her own nationally syndicated television talk show in 1980.  Performers on the Toni Tennille Variety Talk Show included Dusty Springfield, Kiki Dee, The Lettermen, Rita Coolidge, The Temptations, The Spinners and Teddy Pendergrass.  Sometimes Toni joined her guests in their songs.  All musical numbers were accompanied by Tennille's seven piece band and her three sisters sang background vocals.  Toni and The Captain performed many of their hits and Toni interviewed an array of popular entertainers including Jaclyn Smith, Lily Tomlin and Viki Carr.

To watch Toni Tennille's interview with Daryl Dragon on her 1980 talk show, click on the link below.


In 2007, Toni and Daryl purchased some land in Prescott, Arizona, built a home, and settled there.  On November 11, 2010, they celebrated their 35th wedding anniversary.  Sadly, however, Daryl, 69, is battling a debilitating health problem and it has hampered his ability as a musician.  His condition was first thought to be a mild form of Parkinson's disease.  In September of 2010, however, Toni Tennille announced that her husband's illness was actually "a neurological condition that causes him to have tremors."

Editor's Update (January 23, 2014):  After more than 38 years of marriage, Toni Tennille, 73, filed for divorce from Daryl Dragon, 71, on January 16, 2014 in Yavapai County Superior Court.  A shocked Daryl said he had no idea why she filed.  He told TMZ that "I gotta figure it out for myself first."

The petition for divorce states, "The parties' marriage is irretrievably broken, (and) there is no reasonable prospect of reconciliation."


Editor's Update (April 18, 2016):  According to an Associated Press story by Mike Cidoni Lennox, Toni Tenille reveals in her book Toni Tenille: A Memoir that her marriage to Daryl Dragon was a flop.  In a phone call from her home near Orlando, Florida, Toni, now 75, told Lennox that she "never felt loved by him.  "He just did not seem able to do that."

Toni stated that the Captain's behaviour became increasingly "eccentric" and that he isolated himself in his bedroom.  She stayed with him because "I didn't want to let the fans down." She lamented that "it's sad to me when I think of what Daryl could have been - what more he could have contributed."

Daryl, 73, who still resides in Prescott, Arizona, receives full-time care at home.  He refused a request for an interview.  (Toni said that his illness is not life-threatening).


Editor's Update: (April 25, 2016): There is an excellent recent Skype interview with Toni Tenille.  She is interviewed by Bob Andelman.  You can watch the interview on YouTube https://www.youtube.com/watch?v=NS1HwYvwTE8


Although Clint Eastwood is widely known as a movie star and film director, he made his career breakthrough on television.  Born May 31, 1930 in San Francisco, California, Eastwood was not far from his 30th birthday when he was cast as Rowdy Yates in the hour-long CBS western series Rawhide.

Filming for the series began in Arizona in the summer of 1958 and Rawhide aired on CBS until 1965.  During those years, Eastwood's schedule was gruelling.  He often worked 12-hour days, six days a week.  Although the show failed to win a Emmy, it was highly acclaimed and popular with television audience for several years.

Rawhide chronicled the adventures of cattlemen as they travelled across the United States.  Eric Fleming played the role of Gil Favor, the trail boss and chief cattle drive organizer.  Eastwood's Rowdy Yates was his right-hand-man and second-in-command of the operation.

By late 1963, Rawhide's popularity was on the wane, but the show was not cancelled until the middle of the 1965-1966 television season.  It's interesting to note that Clint was the only member of the cast to appear in all 217 episodes of the series.

Clint Eastwood's television career began modestly in 1955 when he portrayed an orderly in a TV movie called Allen in Movieland.  Allen in Movieland was a comedy/musical in which stars such as Steve Allen and Tony Curtis played themselves.

In 1956, Eastwood was cast in some minor television roles.  He was a quick-tempered army officer in a segment of ABC's Reader's Digest series called "Cochise, Greatest of the Apaches" and he played Joe Keeley, a motorcycle gang member on a Highway Patrol episode.

Clint portrayed a cadet in a 1957 episode of the military anthology West Point called "White Fury."  That same year, he took on the role of a suicidal gold prospector named John Lucas in "The Last Letter," a segment of the long-running western anthology, Death Valley Days.

Eastwood made a brief appearance in yet another western series in 1957.  According to Patrick McGilligan in his unauthorized biography, Clint: The Life and Legend, Eastwood "can be spotted, fleetingly," in an episode of Wagon Train.  In the filmography at the end of the book, McGilligan names the episode as "The Charles Avery Story."

In 1958, Clint Eastwood played a Navy lieutenant in an episode of Navy Log, a military anthology that reenacted true incidents that had happened to U.S. Navy personnel.  The segment was entitled "The Lonely Watch."

In early 1959, Eastwood made a memorable guest appearance on Maverick, a western series with a humorous bent, starring James Garner.  In the episode, Clint portrayed a cowardly and cold-blooded villain named Red Hardigan.  Hardigan is determined to marry the daughter of Bret Maverick's (Garner) friend for her money.  The episode, "Duel at Sundown" aired on February 1, 1959 (Season 2, Episode 19).


During his Rawhide days, Clint Eastwood also appeared in an episode of Mr. Ed, the then-popular sitcom about a talking horse.  The episode was entitled "Clint Eastwood Meets Mr. Ed" (Season 2, Episode 25).  It aired on CBS on April 22, 1962.

Eastwood portrayed himself in the episode, a change from his usual cowboy roles.  The plot revolves around the problems Clint faces when he moves into Wilbur Post's (Mr. Ed's owner, play by Alan Young) neighbourhood.  Mr. Ed sets up a party line with Clint's house, causing great frustration for Mr. Eastwood.

To watch "Clint Eastwood Meets Mr. Ed," click on the links below.


To listen to an interview with Alan Young about Clint Eastwood's appearance on Mr. Ed, click on the link below.

Now at the age of 81, Clint Eastwood remains active in filmmaking, though his work is frequently behind the camera.  He recently directed Leonardo Di Caprio in his role as FBI strongman J. Edgar Hoover in the film J. Edgar.  Yet, without the success of Rawhide back in the late 1950s and early 1960s, his iconic film career may never have happened.

It has just been announced that Clint Eastwood's family will star in a reality show called Mrs. Eastwood & Company.  The show will air on E! and it will focus primarily on Clint's wife, Dina Eastwood, and two teenage daughters, Francesca, 18, and Morgan, 15.  Francesca's birth mother is actress Frances Fisher, but she refers to Dina as "Mom."

Clint will only make guest appearances on Mrs. Eastwood & Company.  The series will showcase Dina's pet project.  She manages an a cappella group called Overtone.