Kristy McNichol : Why she gave up her career 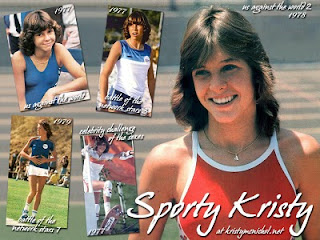 Kristy McNichol is a name we seldom hear anymore.  She certainly has turned away from the spotlight.  In fact, she hasn’t been seen on the screen since 1995.  Kristy retired from acting after being diagnosed with bipolar disorder in the early 1990s.  In the 1970s, however, she was one of the biggest stars on American television.  From 1976 until 1980, Kristy starred in the popular prime time drama Family.  She played Leticia “Buddy” Lawrence, the youngest member of the Lawrence family of Pasadena, California.  The late James Broderick played lawyer Doug Lawrence, the father of the family.  Broderick, who died of cancer in 1982, was the real-life dad of actor Matthew Broderick (Matthew and his wife, Sarah Jessica Parker, named their son James after him).  Sada Thompson portrayed the matriarch of the family, Doug’s stalwart wife, Kate.  Sada is now 83 years old.
There were three Lawrence siblings.  Gary Frank played Willie, the middle child, and two actresses portrayed the divorced older sister, Nancy Lawrence Maitland.  Elayne Heilveil initiated the role of Nancy in 1976.  She was soon replaced by Meredith Baxter-Birney who would later shoot to fame on Family Ties in the 1980s.  Quinn Cummings joined the cast in 1978 as Annie Cooper, the Lawrences’ adopted daughter.
During the four-year run of the series, the characters faced several kinds of challenges and difficulties.  The show dealt with such issues as cancer, alcoholism and many teen-related problems.  For her performance in the role of Buddy Lawrence, Kristy McNichol received four Emmy Award nominations and earned two Emmys (1977 and 1979) for Best Supporting Actress in a Dramatic Series.
Kristy was born Christina Ann McNichol on September 11, 1962 in Los Angeles, California, the daughter of Jim McNichol, a carpenter, and Carollyne, an actress and business manager.  Her parents divorced when she was a young child.  At an early age, Kristy and her older brother Jimmy appeared in television commercials.  In 1973 she appeared in a segment of Love American Style entitled “Love and the Unsteady Steady.”
By the age of 12, Kristy was a regular on the short-lived CBS TV series Apples Way.  This drama focused on the lives of architect George Apple and his clan.  George, his wife Barbara and their four children decide to leave the hustle and bustle of Los Angeles and move to George’s hometown of Appleton, Iowa where the city-bred children must adapt to life in a small rural community.  The show only ran for 13 episodes, but from 1974 to 1975, Kristy played the role of Patricia Apple, one of the four siblings.
After the demise of Apple’s Way, Kristy was cast as the introspective teenager, Buddy Lawrence, in Family.  The show debuted in 1976 and was warmly received by fans and critics.  Kristy became a fixture on the cover of teen magazines and a genuine star.  In 1978, at the pinnacle of her stardom in Family, Kristy recorded an album with her brother Jimmy.  The album was titled Kristy & Jimmy McNichol and featured the Chiffons' 1963 hit single "He So Fine."  To promote the album, Kristy appeared on The Merv Griffin Show and The Carpenters Christmas Special.

To listen to Kristy and Jimmy McNichol singing "He's So Fine," click on the link below.


http://www.youtube.com/watch?v=zSVMVvKV0OY&NR=1
During the 1970s, Kristy also made appearances on Starsky and Hutch, The Love Boat and The Bionic Woman.  In 1978, she won acclaim for her role as Patty Bergen in the television movie The Summer of My German Solder.  Kristy played a young Jewish girl living in Arkansas during World War II who befriends a German prisoner of war.
When Family ended, McNichol set her sights on a movie career.  She had already appeared in the 1978 dark comedy The End with Burt Reynolds.  In 1980, Little Darlings, a coming-of-age story, was realeased in which she starred with Academy Award winner Tatum O’Neal and an up-and-coming young actor named Matt Dillon.

Kristy's  big screen career really began to blossom with the role of Polly in Only When I Laugh (1981) alongside Marsha Mason, for which she won a Golden Globe nomination.  In 1981, at the height of her movie stardom, 19 year-old Kristy received over a $1 million dollars for her appearance in the film The Night the Lights Went Out in Georgia with Mark Hamill and Dennis Quaid.  This was an unprecedented amount for an actress of her age at that time.
In the late 1980s, with her film career in severe decline, Kristy McNichol found a new occupation – hairdressing.  She attended beauty school and worked at a friend’s Beverly Hills salon.  In 1988, however, she returned to television in the family comedy Empty Nest.  Kristy portrayed police detective Barbara Weston in the series.  Although Empty Nest was a success, Kristy left the show in 1992 after being diagnosed with bipolar disorder.  The stress of acting was not conducive to her emotional well-being and she realized she had to give it up.  She did, however, appear in the final two episodes of the series in 1995. That was her last screen appearance, although she voiced characters in the animated series Extreme Ghostbusters (1997) and Invasion America (1998).
In 2001, Kristy McNichol issued a public statement explaining her decision to relinquish her acting career.  She said, “A lot  of people have wondered what I’ve been up to.  I retired from my career after 24 years.  My feeling was that it was time to play my biggest part – MYSELF.  I must say that it has been the best thing that ever happened to me.  So many fans are disappointed that I’m not currently acting, however some may not realize that the process I’m in at this time is necessary and vital for my personal happiness and well-being."

Now 48 years old, Kristy McNichol has never married and lives a very private life in Los Angeles.  She has taught acting at a private school and devotes time to charitable endeavours.

Jimmy McNichol, now 49, gave up acting sometime in the 1990s.  In 1996, he recorded as a singer under the name Jimmy James. Jimmy married his wife Renee in 1997 and is the father of two children, a son named Nash and a daughter named Ellis.