Lee Majors: What is the Six Million Dollar Man up to these days? 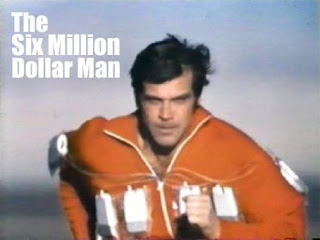 Steve Austin, astronaut, a man barely alive.  Gentlemen, we can rebuild him.  We have the technology.  We have the capability to make the world’s first bionic man.  Steve Austin will be that man, better than he was before.  Better, stronger, faster.
- From the introduction to The Six Million Dollar Man
To view the opening sequence of The Six Million Dollar Man, click on the link below.

http://www.youtube.com/watch?v=HofoK_QQxGc
Lee Majors became famous for his portrayal of Colonel Steve Austin, the bionic man on the hit series The Six Million Dollar Man.  The Six Million Dollar Man ran from 1974 until 1979 and sparked a succession of superheroes on television in the mid 1970s.  Lee's character was an astronaut who had been severely injured when his experimental moon-landing craft crashed in a desert.  In an attempt to save his life, government doctors performed a new kind of operation in which certain human parts were replaced by atomic-powered electromechanical devices.
Steve Austin survived as a cyborg, part human and part machine.  He could run at an incredible speed.  He possessed superhuman vision and he had outstanding strength in his right arm.  With these abilities, Austin went on dangerous crime-fighting missions for the Office of Scientific Information
After The Six Million Dollar Man, Majors starred in another hit ABC series, The Fall Guy.   He played Colt Seavers, a Hollywood stuntman who moonlighted as a bounty hunter.  The Fall Guy ran from November of 1981 until May of 1986.
In the early 1990s, Lee moved to Fort Lauderdale, Florida and resided there for about ten years.  In 2001, he hosted Forbidden Secrets on Pax TV, a one-hour series that focused on little-known secrets such as where to purchase cheap diamonds or how to change your identity.
Majors made a guest appearance on William Shatner’s CBS comedy $#*! My Dad Says.  The episode aired on February 3, 2011 and it marked the first time he and Shatner had worked together in 36 years (Shatner guest starred on The Six Million Dollar Man back in 1974).
Some interesting facts about Lee Majors 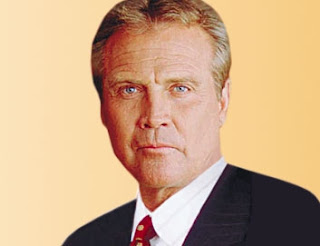 * Lee Majors’ real name is Harvey Lee Yeary.  He was born on April 23, 1939 in Wyandotte, Michigan, a suburb of Detroit.  His father, Carl Yeary, died in a work-related accident before he was born.  His mother, Alice Yeary, was killed in an automobile crash before his second birthday.  The child was then adopted by his paternal aunt and uncle, Harvey and Mildred Yeary, and brought to their home in Middlesboro, Kentucky.
* His first television series was The Big Valley in 1965.  He played the role of Heath Barkley, the illegitimate son of Victoria Barkley’s (played by Barbara Stanwyck) deceased husband, Tom.  Lee beat out scores of young actors, including Burt Reynolds, for the part of Heath.
* Majors has been married four times.  His first marriage was to Kathy Robinson in 1961.  They had one child, Lee Marjors, Jr. (born in 1962) and divorced in 1964.  Lee then wed actress Farrah Fawcett on July 28, 1973.  During Farrah’s Charlie’s Angels days, they were one of Hollywood’s most-watched couples, each starring in a hit television series.  They eventually split up and were divorced on February 16, 1982.
Lere married for a third time in 1988 to Playboy Playmate of 1985, Karen Valez.  Lee had three children with Valez; a daughter, Nikki Loren Majors (born 1988) and twin sons, Dane Luke Majors and Trey Kulle Majors (born 1992).  The marriage ended with a bitter divorce in 1994.  On November 1, 2002, Lee wed actress/model Faith Noelle Cross in Positano, Italy.  They settled in Las Vegas, Nevada.  At 71 years old, Lee Majors is 35 years older than 36-year-old Faith.
* Lee reconnected with his ex-wife Farrah Fawcett shortly before her death from anal cancer in 2009.  They hadn’t spoken to each other for many years.  When she died on June 25, 2009, his issued a statement which read, “She fought a tremendous battle against a terrible disease.  She was an angel on earth and now an angel forever.
* Lee’s first screen appearance was in the 1964 movie Strait-Jacket with Joan Crawford and Diane Baker.
* In 2003, Lee had single heart bypass surgery.
* All the running and jumping on The Six Million Dollar ravaged his knees.  In a 2001 story by Kevin D. Thompson for Cox Newspapers, Lee is quoted as saying, “When I would jump into a scene, I always had to land stiff-legged and couldn’t go down on my hands because I was bionic.  I had to absorb it all in my knees, and all that sudden impact really killed them.”
- Joanne
Posted by Joanne at 1:29 AM