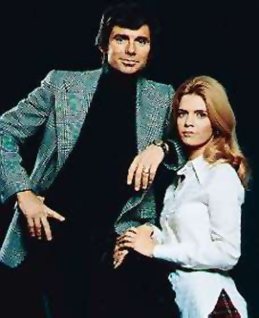 By the early 1970s, the dominance of such rural-based television shows as Green Acres, Petticoat Junction, The Beverly Hillbillies andThe Andy Griffith Show had ended.  Advertisers wanted to sell automobiles and they wanted to attract a wider market.  With the success of All in the Family and Sanford and Son, the focus was on a more urban and ethnically diverse audience.  Although a new situation comedy called Bridget Loves Bernie seemed exactly right for the times, it turned out to be a hot potato.


Bridget Loves Bernie was first telecast on the CBS network on September 16, 1972.  The series was created by Bernard Slade, the creator of ABC’s The Partridge Family (1970-74).  It was loosely based on the premise of Abie’s Irish Rose, a 1920s Broadway play and 1940s radio show.
Set in New York City, Bridget Loves Bernie starred David Birney as Bernie Steinberg, an aspiring young playwright.  Bernie happens to be Jewish and he drives a taxi to make ends meet while pursuing his writing career.  One rainy day he meets Bridget Fitzgerald (Meredith Baxter), an elementary school teacher, at a bus stop.  It’s love at first sight, but when they discover their respective last names are Steinberg and Fitzgerald, they agree that they “have a problem.”  The two marry and romantic complications ensue.
Bridget’s parents are upscale Irish Catholics and her brother, Father Michael Fitzgerald, is a priest. Bernie’s parents, on the other hand, own and operate a Manhattan delicatessen.  The newlyweds share an apartment above the Steinberg’s delicatessen and try to adjust each other’s cultural, religious and social background.  Most of show’s humour and its plotlines revolved around the differences between their two families and Bridget and Bernie’s attempts to reconcile those differences.  For example, in one episode, the couple must decide whether to celebrate Christmas or Chanukah.
It is interesting to note that Bridget’s wealthy father, Walt Fitzgerald, was portrayed by David Doyle.  Doyle went on to play the role of Charlie’s assistant, John Bosley, on Charlie’s Angels.  He passed away on February 26, 1997 at the age of 67.
Bridget Loves Bernie had an ideal timeslot.  It aired on Saturday nights between All in the Family and The Mary Tyler Moore Show and its ratings were quite high.  Nevertheless, nervous CBS executives decided to cancel the series in response to the mail they received objecting to the inter-religious marriage depicted on the program.  Some religious groups, particularly Jewish, were upset that the show condoned and publicized mixed marriages.
Bridget Loves Bernie went off the air after just one season.  Remarkably, the series was cancelled at the end of a season in which it finished number five in the Nielsen ratings.  It ran for 24 episodes and its final episode aired on March 3, 1973.


After the cancellation of Bridget Loves Bernie, its two stars married in real life.  Meredith Baxter and David Birney wed in 1974 and had three children – Kate (born 1974) and twins, Mollie and Peter (born 1984).  Meredith took the stage name “Meredith Baxter Birney”.  When their marriage ended in divorce in 1989, she reverted to “Meredith Baxter”.
After Bridget Loves Birney. Meredith’s career flourished.   She won two Emmy nominations for her portrayal of Nancy Lawrence Maitland, the older sister on the ABC drama Family (1976-1980).  Then she landed her signature role.  From 1982 until 1989, Meredith starred in the smash hit series Family Ties as Elyse Keaton, the amiable mother of Michael J. Fox’s precocious young conservative, Alex P. Keaton.


David took on numerous television roles (Hawaii Five-0, Medical Center, Fantasy Island, Police Story) and starred in several television movies, but never really had a huge hit of his own.  In 1976, he played the Al Pacino part in the short-lived TV version of Serpico.  From 1982-83, he appeared as Dr. Ben Samuels in the hospital drama, St. Elsewhere.
Meredith Baxter’s autobiography titled Untied: A Memoir of Family, Fame, and Floundering was released on March 1, 2011.   In her book, she alleges that David Birney repeatedly abused her, both psychologically and physically, during their 15 years of marriage.  She claims that she dealt with the alleged abuse by drinking and that she has been sober since 1990.  Baxter admits to driving under the influence.  She says she was so terrified of facing David at home that she would sip wine as she drove back from the set of Family Ties in the 1980s.
In a statement to People magazine, Birney, 71, vehemently denied his ex-wife’s allegations.   He described her claims as “an appalling abuse of the truth” and insisted she concocted her tales of woe to win custody of their three children.  The 63-year-old Baxter, however, is standing by her account.
To watch a video of the pilot episode of Bridget Loves Bernie, click on the link below.
http://www.dailymotion.com/video/x7xk02_bridget-loves-bernie-pilot-episode_shortfilms
- Joanne
Posted by Joanne at 12:39 PM