Lorenzo Lamas: What is he doing today? 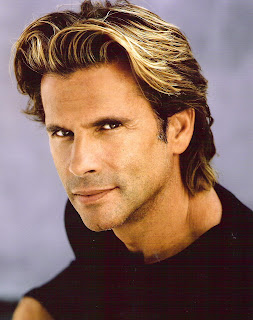 If you remember the prime time soap Falcon Crest, then you’ll remember Lorenzo Lamas on the series.  Falcon Crest ran from December 4, 1981 until May 17, 1990 on CBS.  Its setting was the luscious Napa Valley region in northern California.  The series chronicled the lives of a wealthy wine-producing family.  The matriarch was Angela Channing, played by Jane Wyman, a veteran actress and Ronald Regan’s first wife.  Angela Channing was a powerful woman and she ruled the Falcon Crest winery with an iron hand.  Angela’s lazy grandson, Lance Cumson, played by Lorenzo Lamas, was a handsome but irresponsible playboy.

After Falcon Crest, Lamas portrayed Reno Raines on the 1990s crime drama Renegade.  From February 2004 until February 2007, he played the role of Hector Ramirez on the daytime soap opera The Bold and The Beautiful.  In May of 2008, he began appearing in the Zaxby restaurant chain television commercials.  Now 53 years old, he stars as himself in Leave it to Lamas, a realty show on E! that is centred on his real-life family.
Lorenzo de Santos-Lamas was born on January 20, 1958 in Santa Monica, California.  He is the son of the late Argentine actor Fernando Lamas and Norwegian-American actress Arlene Dahl.  He is also the stepson of swimming film starlet, Esther Williams.  Fernando Lamas and Dahl were divorced in 1960 and Fernando married Williams in 1960 when Lorenzo was 11 years old.  The marriage lasted until the death of Fernando Lamas on October 8, 1982.
Lorenzo Lamas has a string of broken marriages.  He has been wed and divorced four times and is the father of six children by three different women.  His first marriage was to Victoria Hilbert from 1981 until 1982.  He then married Michele Smith in 1982.  Lamas and Smith had two children, a son named Alvaro Joshua “A.J.” Lamas (born December 19, 1983) and a daughter named Shayne Lamas (born November 9, 1985).  Lorenzo split with his second wife in 1985.
In 1989, Lamas married Kathleen Kinmont, the daughter of his Falcon Crest co-star Abby Dalton (Dalton played Lorenzo’s television mother, Julia Cumson).  Lorenzo and Kathleen Kinmont divorced in 1993.  Lamas then married for a fourth time in 1996 to Playmate of the Month Shauna Sand.  That marriage produced three daughters: Alexandra Lynne Lamas (born November 22, 1997), Victoria Lamas (born April 24, 1999) and Isabella Lorenza Lamas (born February 2, 2001).  Lorenzo and Sand divorced in 2002.  Lamas is also the father of a daughter, Paton Lee (born 1998), with actress Daphne Ashbrook.
Check out Lorenzo Lamas’ official website at http://www.lorenzo-lamas.com/html/current_projects.html

EDITOR'S UPDATE (June 6, 2013) - Lorenzo Lamas, married Shawna Craig at the Casa Dorada Resort in Cabo San Lucas, Mexico on April 30, 2011.  It was his fifth marriage.  He proposed to Shawna, 29 years his junior, at Mr. Chow's restaurant in Beverly Hills, California.