Golly, Jack Larson, it's your birthday! 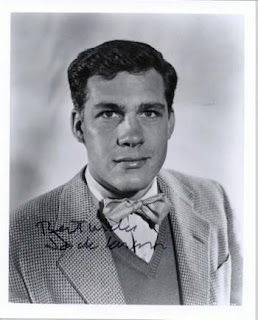 Jeepers, Superman!  Jimmy Olsen turns 82 years old today.  I’d like to wish a Happy Birthday to Jack Larson, the man who portrayed the young cub reporter in The Adventures of Superman from 1952 until 1958.  Jack Edward Larson was born in Los Angeles, California on February 8, 1928 (He has at times claimed 1933 as his birth year, so he may only be 78 years old).  His father was a milk-truck driver in East Los Angeles and his mother was a Western Union clerk.
Jack was an only child and his parents divorced.  He attended Pasadena Junior College (now Pasadena City College) as did his co-star in The Adventures of Superman, George Reeves.  At Pasadena College, Larson was motivated to write plays and he also took to the stage
In 1948, Larson had the lead role in a musical comedy he had written called Balguna del Mar and was spotted by an agent from Warner Brothers.  He became a contract player at the studio and was cast in the post-World War II film Fighter Squadron.  The film was directed by Raoul Walsh and featured another newcomer by the name of Rock Hudson.
In 1951, Larson’s agent suggested to him that he audition for the role of Jimmy Olsen in the new Superman television series.  Larson was reluctant to try out for the part because he was determined to be a serious actor.  The casting director assured him that nobody would see the show and compared it to a Saturday morning serial.   Larson was advised to take the money and run, so he accepted the job.  He never dreamed how popular the series would become.
Due to his Jimmy Olsen role, however, the actor became typecast.  He was recognized everywhere as Jimmy and he felt trapped by the character.  Although the role brought Jack much fame, it became a detriment to his acting career.  The Superman series ended abruptly when its star, George Reeves, apparently committed suicide in June of 1959 (Some believe he was murdered or the victim of an accidental shooting).
After the demise of the show, Jack Larson had great difficulty finding work.  He eventually quit acting to concentrate on writing plays and musical librettos. Through the years, however, Larson has made some notable television appearances.  In 1960, he played the role of Buzz in an instalment of The Millionaire.  He also appeared as a corporal named Tommy in a Gomer Pyle USMC episode entitled “PFC Gomer Pyle”.  The episode aired on September 17, 1965.  In more recent years, Larson has taken cameo roles associated with Superman and his Jimmy Olsen character.
In 1991, he appeared on the television series Superboy along with Noel Neill, the actress who played Lois Lane in The Adventures of Superman.  He was also featured as an older Jimmy Olsen in an episode of Lois and Clark: The New Adventures of Superman.  The episode was entitled “Brutal Youth” and was first telecast on October 20, 1996.  In the late 1990s, Larson had a cameo alongside Jerry Seinfeld and an animated Superman in an American Express commercial.  In his most recent television appearance, he guest starred on Law and Order: Special Victims Unit in an episode which aired on January 26, 2010.
Golly, Mr Kent, here are a few other tidbits about Jack Larson.
* During the late 1969 and early 1970s, he adamantly opposed the Vietnam War.  That was not a popular stance at the time and it most certainly did not help his career.
* His partner for 35 years was screenwriter and film director James Bridges.  Larson served as co-producer of such Bridges’ films as The Paper Chase (1973) and Urban Cowboy (1980).  Their relationship lasted until Bridges died of cancer in 1993.
* He lives in Brentwood, California in a home designed by famed architect Frank Lloyd Wright.