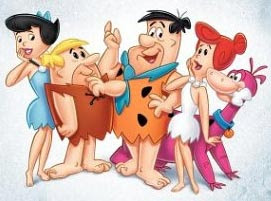 If you are a Flintstones fanatic, TV Banter has a treat for you today.  In honour of the 48th birthday of Pebbles Flintstone (she was born on an episode called “The Blessed Event” which aired on February 22, 1963), here is a 15-question quiz on the series.  Good luck!﻿﻿﻿﻿﻿﻿﻿﻿﻿﻿﻿﻿﻿

2.  In a November 12, 1964 episode of The Flintstones, a strange family (similar to the Addams Family and The Munsters) moves into a cave nearby Fred and Wilma.  What was the last name of this weird family?
A.  The Gruesomes
B.  The Weirdlys
C.  The Creepsters
D.  The Ghostlys
E.  The Grimlys

4.  What was the name of the paperboy who often annoyed and outsmarted Fred?
A.  Elmer
B.  Arnold
C.  Eddie
D.  Billy
E.  Bobby


7.  The Great Gazoo was a tiny, green alien who first appeared on the show on October 29, 1965.  Who provided the voice for the Great Gazoo?
A.  Bob Newhart
B.  Harvey Korman
C.  Tim Conway
D.  Ed Asner
E.  Tony Randall

8.  What was the name of the Great Gazoo’s native planet?  (This is your bonus question.  Give yourself an extra point if you answer it correctly)
A.  Zetox
B.  Xerox
C.  Plutarch
D.  X-Rock
E.  Marstone

12.  What did Barney and Betty do before they found baby Bamm Bamm on their doorstep?
A.  They knocked on wood
B.  The ate dinner
C.  They built a nursery
D.  They both had a dream they would find a child
E.  They wished upon a star

13.  Where did Fred fall asleep and have a Rip Van Winkle dream?
A.  At the opera
B.  At his company picnic
C.  In his backyard hammock
D.  On his porch
E.  Watching television in his living room

14.  What was the name of the dance craze created by Fred Flintstone after accidentally dropping a bowling ball on his foot.
A.  The Flintstone
B.  The Freddie
C.  The Frantic
D.  The Bowling Ball Rock
E.  The Fred Rock

15.  Fred and Barney attend an international Boy Scouts (Cave Scouts) Jamboree.  They join the scouts in a multilingual rousing rendition of which song?
A.  Michael Rowed the Boat Ashore
B.  Row Row Row Your Boat
C.  If I Had a Hammer
D. Old MacDonald Had a Farm
E.  Kumbaya

2.  A.  The Gruesomes
Weirdly and Creepella Gruesome, and their son Gobby, move into Tombstone Manor.
To view a Flintstones promo with the Gruesomes, click on the link below.
http://www.youtube.com/watch?v=m-JnMNIcOBM

3.  D.  Mel Blanc
Famed voice actor Mel Blanc, “The Man of a Thousand Voices” provided the yapping sound of Dino the Dinosaur.  Mel was also the voice of Barney Rubble, although Daws Butler assumed the role briefly while Mel recovered from a car accident.

6.  E.  Pearl Slaghoople
Wilma Flintstone’s maiden is a source of dispute.  In early episodes of the 1960-1966 series, it is clearly Wilma Pebble.  For example, in the episode “The Entertainer”, Wilma’s old friend Greta Gravel refers to her as Wilma Pebble.  In later episodes, however, Wilma’s maiden name is Slaghoople, based upon the name of her mother in the original series, Pearl Slaghoople.

8.  A.  Zetox
Gazoo was exiled from his home planet, Zetox, as a punishment for having invented a doomsday machine, a weapon of mass destruction.

9.  D.  Baby Puss
The name of the Flintstones’ sabre-toothed tiger was Baby Puss.

10.  A.  Tex Hardrock
Fred’s rich Texas uncle on his mother’s side was named Tex Hardrock.

13.  B.  At his company picnic
In an episode titled “Rip Van Flintstone" (Season 6, Episode 8, Air Date: November 5, 1965), Fred falls asleep under a tree at his company picnic.  When he awakens, it seems as if twenty years have passed.  Barney is a wealthy tycoon and Pebbles and Bamm Bamm are married.

14.  C.  The Frantic
In a 1965 episode “Shinrock-A-Go-Go”, Fred drops a bowling ball on his foot.  He jumps around, howls in pain and creates a dance sensation called The Frantic.  The episode is a takeoff of the then-popular TV music show Shindig.