Well, I have to say that I enjoyed the Nikki intervention episode.  Her alcoholism storyline finally came to a head.  Once in awhile, it's interesting to have an episode that focuses on one character. We all know that there will be more trials and tribulation for Nikki when she leaves rehab because, my friends, that is the essence of soaps.

Are you glad that Detective Mark Harding is back in town?  Although he's never been one on my favourite characters, he seems to have acquired some wisdom and intelligence during his absence from Genoa City. He actually enlightened his boss, clueless police chief, Paul Williams, when The Clueless One declared that Tobias was the killer, case closed. Although Harding is no friend to Kevin, he argued that the computer whiz had a point when he warned that the murders had been solved too easily and that Tobias had been set up. Of course, Clueless Paul ended up arresting Kevin.

The writers have turned Neil into a really vengeful man for the purposes of a storyline.  There is no doubt that Neil was terribly wronged by Devon and Hilary. Now, however, he is hungering for payback and fantasizing about revenge.

The saga of the two Jacks continues, although we don't have to watch those loathsome scenes between Jack and Kelly anymore.  Peter Bergman seems to be enjoying himself immensely.  I think he likes playing Marco because he can let loose and be a lot tougher on Victor.  However, Bergman can't play a dual role permanently.  Sooner or later, one of the "Jacks" is going to have to go - and I don't think it's going to be the real Jack Abbott.  It's obvious that Marco will either die or go to prison.

Marco is supposed to be South American, but Peter Bergman doesn't look Latin at all.  The fake moustache doesn't really help.  As for Marco's girlfriend, the mysterious Marisa, wouldn't she speak to Marco in Spanish?  If she did  she'd discover that the real Jack can't speak Spanish and she'd realize that he isn't Marco. Then there would be no storyline.  That's why soaps aren't realistic, fans.

The Great Victor Newman is certainly finding it much more difficult to deal with a drug lord than with Jack Abbott.  Could this be the storyline that finally brings Victor down?.  I hope so.  It's about time that Victor loses.  It's about time he has his comeuppance.  The Black Knight never accepts any responsibility for his actions. He always blames someone else, especially Jack Abbott.  Now he's blaming Neil for Nikki's decision to live apart from him when she leaves the rehab facility.  Boo! Hiss!

So Ashley is popping prescription pills.  I hope she doesn't have a serious illness or an addiction, but what else could it be?   Haven't we had enough of that on the show with Michael's cancer and Nikki and Neil's alcoholism?

Regular reader, Fifi from Collingwood, Ontario, made a point to me regarding Avery and the scene where she slapped Joe in the face when she discovered his deceit about being able to walk.  Fifi contends that there is a double standard.  She says it shouldn't be any more acceptable for a woman to slap a man in the face than it is for a man to strike a woman.  On soaps, it is a common occurrence for a woman to hit a man.  What do you think, viewers?  Do you agree with Fifi?

A reader wants to know about the actor who played "Angel," the doctor at the rehab facility where Nikki is being treated for alcoholism.  His name is Frank Runyeon and he is no stranger to soaps.
From 1980 to 1987, he played Steve Andropoulos on As the World Turns.  He then starred as Michael Donnelly on Santa Barbara from 1988 until 1991, Simon Romero on General Hospital in 1992 and Ed McClain on Another World in 1994.

Frank received a Masters degree from the General Theological Seminary in New York and performs one-man biblical plays throughout the United States.  With that flowing beard, he certainly resembles a biblical prophet or apostle. 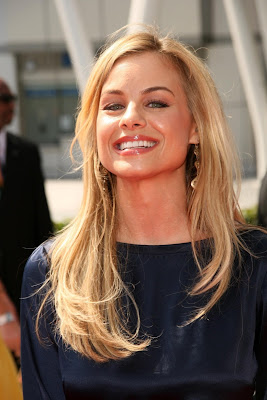 Soap Opera Digest and Daytime Confidential have reported that Jessica Collins, who plays legal eagle Avery Bailey Clark, has been let go from The Young and the Restless. The popular actress will apparently exit the show this summer amid rumours that the departure head writer Charles Pratt originally planned for her was so controversial that it had to be rewritten.  If true, that doesn't surprise me at all. It's Pratt's style.  It's exactly how he operates.

Jessica's leaving is surprising news and it is disappointing to many Y&R viewers. Collins has been a member of the cast since 2011.  Some fans really liked the pairing of her character with Dylan and are unhappy that he is now with Sharon.

When Avery goes, what will happen to the deceitful Joe Clark (Scott Elrod)?  Joe really can walk and Avery was appalled when she learned that he has been lying to her.  That shocking revelation will undoubtedly lead to her departure. After Jessica leaves, I think Elrod will most likely remain on the show. His Joe character may become involved with Ashley or Phyllis or maybe even Sharon.  As for Jessica, perhaps she will join the cast of General Hospital along with former Y&R stars Michelle Stafford and Billy Miller.

How do you feel about Jessica Collins (Avery) leaving the show?

That's all for now.  Don't forget that the newt edition of Y&R Report will appear in this space on Saturday, June 20, 2015.

Email ThisBlogThis!Share to TwitterShare to FacebookShare to Pinterest
Labels: Fe