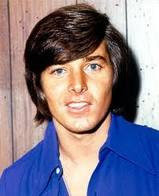 Bobby Sherman was one of the most popular teen idols of the late 1960s and early 1970s.  Although he was recognized as a singer, Bobby did not really achieve stardom until he appeared in the popular television show Here Come the Brides.  With the immediate success of Brides and the television exposure it provided, Sherman’s career skyrocketed.  He became a highly popular recording artist and a teen idol.  With his shaggy hair and megawatt smile, he appeared on the cover of gossip and teen magazines such as Tiger Beat, 16 and Fave.

"Peace, love and Bobby Sherman" was a trendy expression during Bobby's heyday.  “Bobby Sherman Chokers” became a fad and the heartthrob's grinning face adorned poster and lunch boxes everywhere.  His photograph could even be found on the back of Honeycomb cereal boxes.  It was part of a promotion by which fans who bought the cereal received free cut-out Bobby Sherman mini-albums. 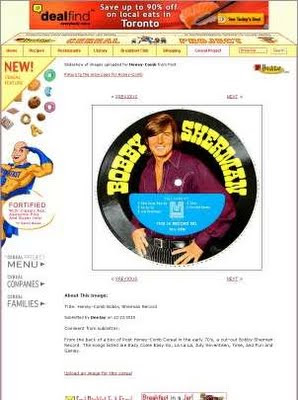 Here Come the Brides was a comedy/adventure series.  It ran from 1968 until 1970 on the ABC network.  The series was set in the Seattle of the 1870s and chronicled the lives of logging camp operator Jason Bolt (Robert Brown) and his family.  Bobby Sherman played the role of Jeremy Bolt, Jason’s younger brother.  David Soul, of Starsky and Hutch fame, portrayed Jason’s other younger brother, Joshua Bolt.
The Bolts were in jeopardy of losing their timberland at Bridal Veil Mountain.  Their logging crew was threatening to revolt due to a lack of women in Seattle.  To solve the problem, Jason devised a scheme by which he sailed to New Bedford, Massachusetts and persuaded 100 prospective brides to return to the frontier with him.  If any of the 100 women left before the duration of a year, Jason would have to forfeit his land to a rival saw-mill operator from whom he had borrowed money to finance the scheme.﻿﻿﻿﻿﻿


﻿﻿﻿﻿After appearing on a March 1971 episode of The Partridge Family entitled “A Knight in Shining Armor,” Bobby Sherman was given his own spin off series on ABC.  It was a sitcom called Getting Together.  Bobby played Bobby Conway, a songwriter struggling to succeed in the music business.  Unfortunately for Sherman, Getting Together faced formidable competition from All in the Family on Saturday nights.  It didn’t really have a chance and was cancelled after only 14 episodes.
Robert Cabot “Bobby” Sherman, Jr. was born in Santa Monica, California on July 22, 1943.  He and his older sister Darlene grew up in Van Nuys, California. Bobby’s interest in music began when he took trumpet lessons as a child.  He attended Birmingham High School in Van Nuys where he was a member of a dance band.  In 1964, he had an opportunity to sing with his old band at a Hollywood party and performed so well that he found himself an agent and eventually a role on Shindig as a house singer.  Shindig was a prime time rock ‘n roll show.  It ran from 1964 until 1966.  A fast-paced program, it featured popular musical performers singing their most recent hits, and glossy dance production numbers.
During his time on Shindig, Bobby Sherman made several recordings, but was unable to come up with that elusive big hit.  In 1967, he appeared on an episode of The Monkees entitled “Monkees at the Movies.”  Bobby played the role of Frankie Catalina, a pompous surfer.  In the episode, he performed a song called “New Girl in School.”  The song was co-written by Brian Wilson of the Beach Boys and Jan Berry of Jan and Dean.
Bobby’s vocal career had been stagnating until he won the role of the shy, stammering Jeremy Bolt on Here Come the Brides.  While Brides was on the air, he had a string of well-produced pop hits such as “Little Woman,” “La La La (If I Had You),” and “Julie Do Ya Love Me.”  By 1972, however, the hits had stopped coming and Sheman’s career went into a tailspin.
To view a video of Bobby Sherman singing "Julie Do Ya Love Me," click on the link below.
http://www.youtube.com/watch?v=JsMONykezJM

With his show business career on the decline, Bobby’s life took a different direction.  After appearing in a 1974 episode of the Jack Webb television series Emergency!, he developed an acute interest in emergency medical services.  It became his passion.  He moved away from the public spotlight and became an Emergency Medical Technician (EMT).  He volunteered with the Los Angeles Police Department, assisting paramedics and giving instruction in first aid.  In the 1990s, he officially became a technical reserve officer with the L.A. police.  Sherman also founded the Bobby Sherman Volunteer EMT Foundation, a non-profit organization that coordinates medical services at community and charity events in southern California.
In 1986, Bobby became a regular cast member of the cable TV sitcom Sanchez of Bel Air.  He portrayed Frankie Rondell, a former teen idol living off the royalties of his one big hit.  The series focused on the lives of a Latino family who had achieved success in the fashion industry.  Bobby’s character was their next-door-neighbour.
Bobby performed in concert as part of the “Teen Idol Tour” of 1998.  He was joined by Peter Noone of Herman’s Hermits and Davy Jones of The Monkees.  Fellow Monkee Mickey Dolenz replaced Jones on the 1999 tour.  Sherman’s last solo performance took place in Lincoln, Rhode Island on August 25, 2001.
Bobby Sherman is now 67 years old.  He married Patti Carnel in 1971.  The couple had two sons, Christopher and Tyler, and divorced in 1979.  Christopher (born 1972) and Tyler(born 1974) have children of their own, making Bobby a grandfather.

Patti Carnel later married David Soul, Bobby Sherman's co-star on Here Come the Brides.  Carnel was Soul's third wife and in October of 1982 he was arrested for assaulting her.  The story broke three days later and it made ugly headlines.  Soul was ordered by a judge to attend psychotherapy sessions and to undergo alcoholism counselling.

Bobby runs his Volunteer EMT Foundation along with Brigitte Poublon.  According to the foundation's website, Poublon came to the United States as a political refugee from Jakarta, Indonesia in the 1960s and settled in Los Angeles.  After graduating from high school, she procured her real estate licence and was employed as a real estate developer with Norton Development Inc. and Homestead Group.  A self-made millionaire, she retired from the real estate business in 1996.  She devotes herself to philanthropy and is the President of Bobby Sherman’s EMT foundation.

﻿
﻿
Bobby Sherman co-wrote his autobiography, Still Remembering You, with Dena Hill.  It was published in 1996.  To promote the book, Bobby appeared on The Rosie O’Donnell Show, The Tonight Show with Jay Leno and A.M. L.A.