Update on Kristy and Jimmy McNichol 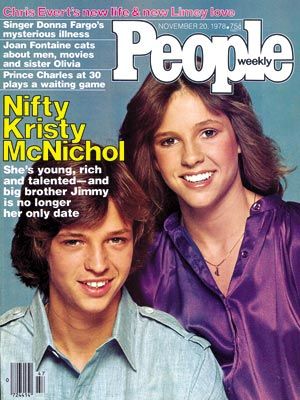 On March 31, 2011, I wrote about Kristy McNichol and why she gave up her acting career .  There continues to be a great deal of reaction to what I wrote over three months ago.  It seems that many people have a keen interest in Kristy and her brother Jimmy.   Several readers commented about how much they enjoyed Kristy's acting and how they hoped she would return to the screen.  Some wished her happiness in whatever she was doing.  Apparently, Kristy evokes fond memories of younger days in the 1970s and and 1980s.  Some readers lamented their lost youth and expressed a desire to turn back the clock.

As Kristy herself stated, she had to leave acting for her health and well-being.  She has bipolar disorder.  As anyone suffering with this affliction or any mental illness can attest, it is an extremely difficult struggle.  The stress of an acting career was just too overwhelming for her.  Perhaps, she  will return to acting some day.  It's her choice, though,  depending on the state of her mental health.  She'll be 49 years old in September, so she won't be playing any teen roles anymore.

It was pointed out to me that in 2008 Kristy attempted to get on Dancing With the Stars.  She was slated to appear in a segment with Florence Henderson of The Brady Bunch.  The network decided not to go through with it.  I was aware of that, but did not mention it in my posting.

Many are curious as to whether Kristy is married.  The answer to that is NO.  She has never taken the vows of matrimony.


OVER TO YOU, TV BANTER READERS!  IS JIMMY DIVORCED?

Thank you TV Banter readers for all your feedback.  I really enjoy reading your comments.  Now I'm wondering if you can assist me in setting the record straight.  In my entry of March 31, I also wrote about Kristy's brother, Jimmy McNichol.  I mentioned that he married Renee in 1997 and that he is the father of two children, a son named Nash and a daughter named Ellis.  A reader informed me that Jimmy and his wife are divorced.  I am trying to find out if the reader is correct.  According to the Internet Movie Data Base (IMdb), Jimmy is still married.  So far, I cannot find anything online that says he is divorced.  I don't want to pay for access to the California divorce records.  Unless it was a secret divorce, it should be mentioned on the web.  If any readers can enlighten me, please do so.  I'd be happy to hear from you.  So far, I have not found any evidence that Jimmy McNIchol is divorced.  By the way, Jimmy was born on July 2, 1961.  He recently celebrated his 50th birthday.

* A reader mentioned that Sada Thompson, the actress who played Kristy's mother on Family, had passed away.  Sada died of lung disease on May 4, 2,011.  She was 83.  My blog entry on  Kristy appeared in March, prior to Sada's death.


* There is some interest as to why Elayne Heilveil was replaced by Meredith Baxter in the role of Nancy Lawrence Maitland on Family.  Elayne initiated the role in 1976.  Unfortunately, I have not been able to find a specific reason why Elayne left the role or why she was replaced.  I did discover that Cheryl Ladd auditioned for the role of Nancy but lost out to Meredith Baxter-Birney, probably because Meredith had more experience.  The producers of Family, Aaron Spelling and Leonard Goldberg, asked Cheryl if she would take the part of Farrah Fawcett's replacement on another of their shows, Charlie's Angels.  Cheryl accepted and ended up portraying Kris Monroe, the younger sister of Farrah's character, Jill Monroe.  She joined the cast of Charlie's Angels in 1977.

To view a video of a scene with Sada Thompson and Elayne Heilveil, the original Nancy on Family, click on the link below.
http://www.youtube.com/watch?v=lT0uUObAF_g


Thanks again, readers.  It's great to hear from you.  Keep the banter going strong!