The Complete Directory to Prime Network TV Shows: 1946 - Present describes The Man from U.N.C.L.E. as "American television's answer to the very popular James Bond movies."  Despite the Cold War, Robert Vaughn and David McCallum were paired as an American and a Soviet agent who worked together fighting an international crime syndicate.  Test your knowledge of this memorable 1960s spy series by completing the quiz below.

A.  Union of National Crime and Legal Enforcers

B.  Ultimate Network for Crime and Lawbreaking Elimination


2.  What was the name of the international criminal organization that was U.N.C.L.E.'s arch-enemy?


3.  In which city was U.N.C.L.E.'s secret American headquarters located?


4.  What was the name of the man who ran U.N.C.L.E., the boss of Napoleon Solo and Illya Kuryakin?


7. How many seasons of the series were broadcast in black and white

A.  Only the first season was aired in black and white.

B.  None.  The entire series was broadcast in colour.

C.  The first two seasons were in black and white.

D.  The first three seasons were in black and white.

E.  The entire series was broadcast in black and white.


8.  What was Napoleon Solo's badge number?


11.  Napoleon Solo was not originally intended to be an American.  What nationality was Solo originally to have been?

A.  The title of each episode ended with the word "solution"  as in "The Double Agent Solution"  or "The Ultimate Solution."

B. The episode titles ended with the word "conflict" as in "The Vulcan Conflict' or the "The Midnight Conflict."

C.  The episode titles ended with the word "puzzle" as in "The Missing Agent Puzzle" or "The Dangerous Puzzle."

D.  The episode titles ended with the word "affair" as in "The Yellow Scarf Affair" and "The Deadly Games Affair."

E.  The episode titles ended with the word "mystery"  as in the "The Hidden Room Mystery" and the "The Disappearing Spouse Mystery."

A.  His marital status was unclear.

C.  He was divorced.

D.  Yes, he was definitely.

U.N.C.L.E. stands for the fictional United Network Command for Law and Enforcement.  The co-creator of the series, Sam Rolfe, wanted to leave the meaning of acronym unclear so it could be thought to represent the United Nations or Uncle Sam.  There were concerns, however, that the acronym would violate New York law prohibiting the use of the initials U.N. for commercial reasons.  Therefore, the producers of The Man from U.N.C.L.E. made it clear that the acronym stood for United Network Command for Law and Enforcement. Unlike nationalist organizations such as the CIA and James Bond's MI6, U.N.C.L.E. is an international crime fighting organization with agents from every nationality and from all over the world.

THRUSH was U.N.C.L.E.'s arch-enemy.  The series never revealed what the acronym THRUSH stood for, but in several U.N.C.L.E. novels written by David McDaniel, it stood for Technological Hierarchy for the Removal of Undesirables and the Subjugation of Humanity.  THRUSH''s goal was nothing less than world domination.  In an episode titled "The Green Opal Affair," Napoleon Solo stated that THRUSH's aim was to conquer the world. 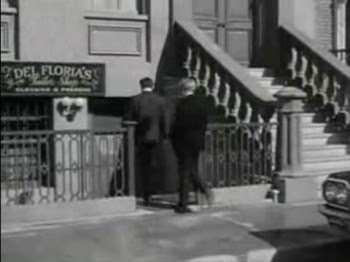 U.N.C.L.E.'s secret headquarters was located in New York City behind a false wall in Del Floria's Tailor Shop, near the East River and the United Nations complex


Alexander Waverly was the head of the U.N.C.L.E. organization.  Leo G. Carroll portrayed Mr. Waverly.  Aside from his role as Mr. Waverly, British-born Leo was best known for his performances in Alfred Hitchcock films and the fantasy movie Topper and the American television series of the same name.  Topper, the TV series ran from 1953 until 1955 on the CBS network.

The Man from U.N.C.L,E. first aired on September 22, 1964 on  the NBC television network.  The series ended in 1968 and 105 episodes were produced.  It was cancelled midway through its fourth season.

The Man from U.N.C.L.E. was originally called  Ian Fleming's Solo and then just Solo.  The title was changed, however, because a new James Bond film, Goldfinger, was released in 1964, with a gangster character named Mr. Solo.  In fact, Eon Productions, the producer of the James Bond film series. launched a lawsuit to prevent production of The Man from U.N.C.L.E..  As a consultant for the series, Bond creator Ian Fleming had contributed some ideas for The Man from U.N.C.L.E., including the name of its hero, Napoleon Solo.  Although the Solo character was billed as a television version of James Bond, Ian Fleming signed an affidavit declaring that nothing in the Solo pilot encroached on any of his Bond characters.  The continued threat of legal action, nevertheless, necessitated a change in the title of the series.  The name "Napoleon Solo" was maintained despite the lawsuit.

Only the first season was broadcast in black and white. The pilot episode, "The Vulcan Affair," however, was shot in colour.  It was filmed from late November to early December 1963 on location at a Lever Brothers soap factory in California.

Napoleon Solo's original badge number was II (Roman numerals), signifying that he was the head of section II.  When filming in colour began at the start of the  show's second season, however, the number on the new coloured badge was written in Arabic numerals as number 11.  The error was never corrected and Solo's badge number remained 11 for the remainder of the run of the series.

Stephanie Powers starred as April Dancer in The Girl from U.N.C.L.E., a short-lived series that aired on NBC from September of 1966 until August of 1967.  In addition to his role on The Man From U.N.C.L.E., Leo G. Carroll also appeared as Mr. Waverly on The Girl from U.N.C.L.E.  Noel Harrison portrayed Mark Slate, a British spy from U.N.C.L.E.'s London office, who teamed with April Dancer in the never-ending battle against THRUSH.  Powers went on to star in the hit series Hart to Hart  with Robert Wagner.
Note: The "girl" (April Dancer) was first introduced in an episode of The Man from U.N.C.L.E. entitled "The Moonglow Affair" that aired on February 26, 1966.  Mary Ann Mobley played the role of April Dancer in that episode. The Mark Slate character was originally played by the late Norman Fell who was best known for his role as Mr. Roper on Three's Company and The Ropers.

The Man from U.N.C.L.E. was replaced by Rowan & Martin's Laugh-In.

The Napoleon Solo character was originally planned to have been a Canadian.  The producers decided that it would be preferable to make him an American.

All the titles of the episodes ended with the word "affair."  The only one that did not begin with "The . . Affair was a two-part 1965 episode entitled "Alexander the Greater Affair."

Illya Kuryakin's marital status was unclear.  In most episodes filmed before mid-1966, he wears a wedding band.  In an episode entitled "The Bow-Wow Affair," (Season One, Episode 20) he is asked directly whether he is married.  He responds enigmatically by paraphrasing the opening line from Andrew Marvell's poem To His Coy Mistress.   "Had I but world enough, and time".is his reply.

* Robert Vaughn is best known for his role as the debonair spy Napoleon Solo.  Born in New York City on November 22, 1939, Vaughn is 79 years old.

In 1983, Robert Vaughn and David McCallum reprised their roles in a television film entitled The Return of the Man from U.N.C.L.E.: The Fifteen Years Later Affair.  The Mr. Waverley character was not recast after the death of :Leo G. Carroll.

* U.N.C.L.E. agents used many gadgets including small cell phones, years before they were commonly used in the real world.

* Although U.N.C.L.E. is a fictional organization, there was a bogus disclaimer after every episode stating, "We wish to thank the United Network Command for Law and Enforcement, without whose assistance this program would not be possible."  There were so many requests that MGM-TV was obliged to send out U.N.C.L.E. membership cards to letter writers.  Talk about blurring the line between reality and fiction!

To watch a video of a Man From U.N.C.L.E. trailer, click on the link below.