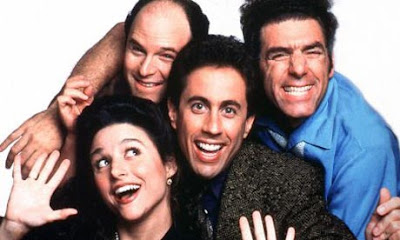 Hey Seinfeld fans, TV Banter presents a 12-question quiz just for you.  If you think you have a great deal of knowledge  about Jerry and the gang, test yourself and see how you do.  Find out how much do you know about the show about nothing?  Okay, let's go . . .

1.  What was the title of the pilot episode of Seinfeld?

A.  Seinfeld and Friends

B.  The Jerry Seinfeld Show

2.  How many seasons was Seinfeld on the air?

3.  Which Seinfeld star is an accomplished magician?

E.  It was never mentioned.

5.  George's father, Frank Costanza, served in the Korean War.  What did he do during the war?

A.  Frank Costanza was an ambulance driver during the Korean War.

B.  He was a dentist for the soldiers.

C.  Frank was an Army chaplain.

D.  He spent most of his time as an Army cook.

E.  He worked in communications

6. What movie were Jerry and his friends on their way to see when they stopped at a Chinese restaurant in the classic episode of the series entitled "The Chinese Restaurant?" (Season 2, Episode 11, Air Date: May 23, 1991).  Note: This is your bonus question.  If you answer it correctly, give yourself an extra point.

B.  Plan 9 from Outer Space

D.  The Silence of the Lambs

8.  What was the name of the fictional coffee shop where Jerry Seinfeld and his friends hung out?

9.  Whom was the character of Cosmo Kramer based on?

A.  An old high school friend of Jerry Seinfeld

10.  During the seventh season of Seinfeld, George Costanza became engaged after an impulsive proposal to an ex-girlfriend, Susan RossAs the wedding drew closer, George got cold feet and tried to get out of it.  As it turned out, his fiancee died.  How did Susan die?

A.   Susan died in a car accident on the way to the wedding.

C.  She fell down the stairs after arguing with George.

D.  She died after licking toxic envelope adhesive from the cheap wedding invitations George had purchased.

E.  She was shot by muggers after trying to prevent them from stealing George's wallet.

11  Which of the following Friends stars appeared on Seinfeld?

12.  In the well known "Soup Nazi" episode, what was Elaine's punishment for not following the Soup Nazi's instructions?

A.  Elaine was banned from the "Soup Nazi's" soup stand for one year.

B.  The "Soup Nazi" announced that he would never serve her her favourite soup (clam chowder) again.

C.  Elaine was no longer allowed to have crackers with her soup.

D.  She had to apologize to the other customers before the "Soup Nazi" would serve her.

E.  The "Soup Nazi" refused to serve her and she was sent to the back of the line.

The pilot episode of the show was titled "The Seinfeld Chronicles," (also called "Good News, Bad News" for syndication).  It originally aired on July 5, 1989 and was rebroadcast on June 28, 1990 after it had been approved as a series.  It's interesting to note that in the pilot episode, the Kramer character was referred to as "Kessler."  The inconsistency was dealt with, however, in a Season 9 episode entitled "The Betrayal."  Trivia Note: Julia Lous-Dreyfus did not appear as Elaine Benes in the pilot episode. 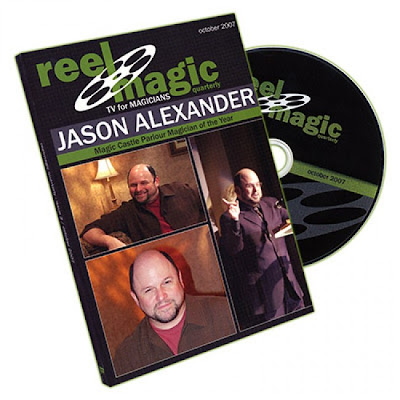 Jason Alexander, who portrayed George Costanza on the show, is an accomplished magician.  So why did he switch to acting.  As Jason told Noah B. Pisner of the The Harvard Crimson this year, "I wanted to be a close-up magician, and I studied with a man who was profoundly good. He assessed me, though, and said, “You’re going to have a lot of trouble being a close up magician.” Whenever I try to palm a standard playing card you can always see a corner peeking out from one side or the other...I also have short stubby fingers, too, and you need long ones for coin manipulation. The observation was: this is not going to work for you."  He eventually went into theatre which he described as "just a different kind of magic trick."

Jason Alexander was selected as the 2006 Magic Castle "Parlour Magician of the Year."  By the way, parlour magic differs from close-up magic in that is done for much larger audiences. Newman's first name was never mentioned on the show.  It was established in an episode entitled "The Ticket" (Season 4, Episode 4, Air Date: September 16, 1992) that Newman was always addressed by his last name, as was Kramer.  Unlike Kramer, whose first name was Cosmo, Newman's given name was never revealed.

A secondary character on Seinfeld, Newman, a postal worker, was portrayed by Wayne Knight in 45 episodes of the sitcom.  His apartment was on the same floor as Jerry's and he was definitely a villain.  Knight once described him as "pure evil" as did Jerry's character in an episode entitled "The Big Salad." (Season 6, Episode 2, Air Date: September 29, 1994).

During the Korean War, Frank Costanza served as an Army cook with the "Fighting 103rd."  The character of Frank Costanza was portrayed by two actors.  The original Frank was played by John Randolph.  Radolf was replaced by Ben Stiller.

Notes: "The Chinese Restaurant," written by Jerry Seinfeld and co-creator Larry David, was the first episode in which Michael Richards did not appear as Cosmo Kramer.  NBC executives were not pleased with the script and were disappointed with what they perceived as the  lack of a concrete storyline.  They were reluctant to produce the episode as they didn't think viewers would find it interesting.  When Larry David threatened to quit the network, the NBC brass finally gave the go-ahead.

Seinfeld and his friends often ate at the fictional Monk's Cafe.  On the series, the exterior of a real New York City restaurant called Tom's Restaurant (West 112th St. and Broadway), was used as a stand-in for Monks.  Tom's Restaurant, known for its neon sign, is located near Columbia University and is the place that inspired Suzanne Vega's 1987 song "Tom's Diner."

The character of Cosmo Kramer was inspired by Kenny Kramer, a former neighbour of Seinfeld co-creator Larry David.  In 1977, Kenny moved into a New York apartment popular with artists in Hell's Kitchen.  The apartment, located at 43rd St. and 10th Ave., was also the home of Larry David.  Kenny Kramer and David lived nest door to each other for six years.

Kenny Kramer cashed in on his association with Seinfeld.  He organized an officially-recognized tour (the Kramer Reality Tour) of the real-life New York locations featured on the wildly popular sitcom.  He also ran for mayor of New York City.  Note: The restaurant pictured in the above photo of Kenny Kramer is Tom's Restaurant.

Susan Ross, played by Heidi Swedberg. died after licking toxic glue on the cheap wedding invitations George had purchased.  Susan's death occurred in an episode entitled "The Invitations" which aired on May 16, 1996.  The Seinfeld gang's indifference to Susan's death created some controversy and offended some viewers.

Courtney Cox appeared in a 1994 episode of Seinfeld entitled "The Wife." (Season 5, Episode 17, Air Date: March 17, 1994).  In the episode, Courtney played Meryl, Jerry's new girlfriend.  Meryl claimed to be Jerry's wife in order to receive a discount that he had been awarded at the local cleaners.

Elaine was banned from the "Soup Nazi's" soup stand for one year because she was indecisive and did not follow his rules.  She was also flippant with him and told him he looked like Al Pacino in Scent of a Woman. The Soup Nazi's response was " “No soup for you! Come back one year!”

"The Soup Nazi" episode was originally broadcast broadcast on November 2, 1995 during Seinfeld's seventh season.  American actor Larry Thomas portrayed the "Soup Nazi" and was nominated for a 1996 Emmy Award for the role.  The restaurant Soup Kitchen International (at 259-A West 55th St. (between Broadway and 8th Avenue in Midtown Manhattan) was the inspiration for this Seinfeld episode.  The Soup KItchen International closed down in 2004 but reopened as part of a restaurant chain called the Original Soup Man.

Larry Thomas was in the news recently because he was upset that a gun manufacturer, Serbu Arms, had used his image in a T-shirt and Facebook campaign opposing New York State's gun laws.  Thomas was incensed when he saw his image and the slogan "No Serbu for You!" being used to promote Serbu's campaign against the ban on the sale of defined assault rifles in the state of New York.

Below is s 2008 photo of the Soup Kitchen International after it had closed down. 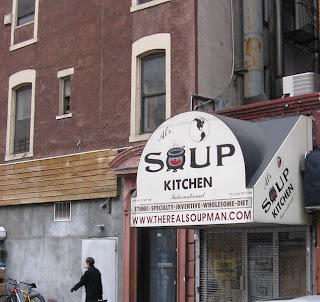