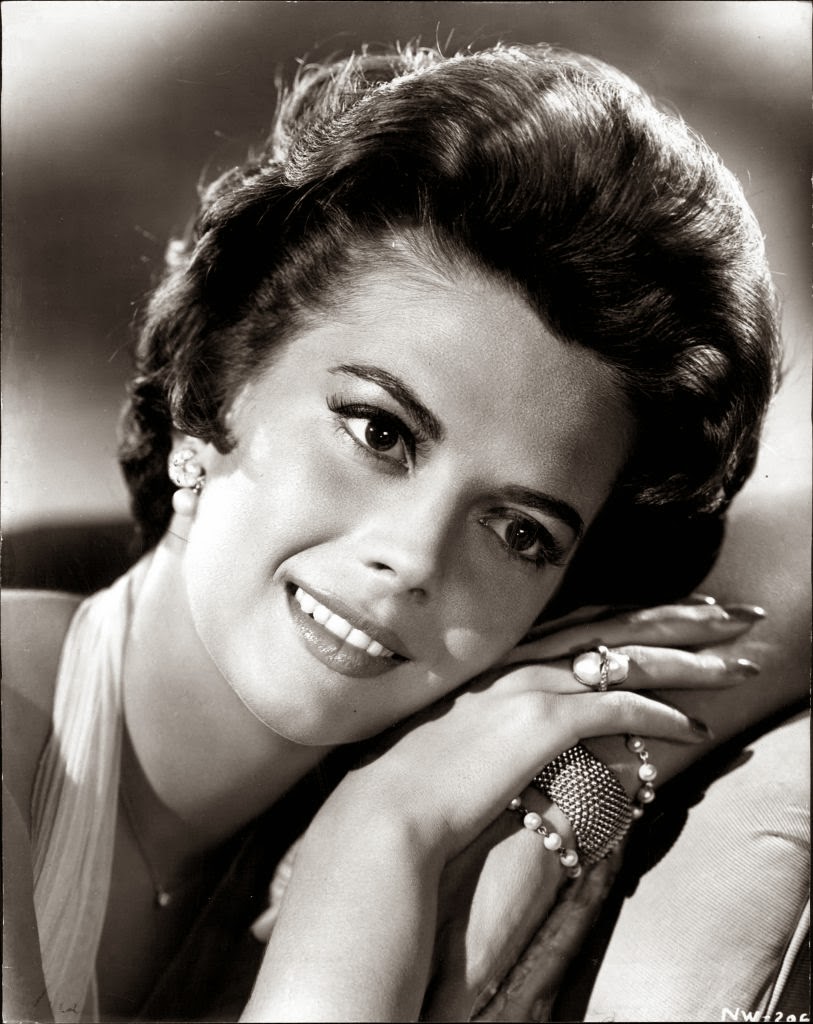 Above is a 1961 publicity photo of Natalie Wood.  It was used by Warner Brothers to promote the film Splendor in the Grass in which Natalie starred opposite a young Warren Beatty.  Although a great star of the silver screen - Natalie is also known for her roles in Miracle on 34th Street (1947), Rebel Without a Cause (1955), West Side Story (1961) . Love with the Proper Stranger (1963) and Bob &Carol, Ted & Alice (1969) - the actress did some worthy television work too.

Recently I viewed a DVD entitled The Jack Benny Program: The Lost Episodes and I came across an episode featuring Natalie and Robert Wagner as Jack's special guest stars.  The couple portrayed themselves in the episode (Season 10, Episode 12).which aired on March 6, 1960.  Natalie had married Wagner for the first time on December 28, 1957 when she just 19 years old.  (She was 21 when she appeared on on The Jack Benny Program).

In the episode, Jack cajoles CBS executives into allowing him to direct an episode of Playhouse 90. the network  highly regarded drama series.  Natalie and "R.J." (for Robert John) Wagner turn out to be the unfortunate stars who are forced to endure his outrageous directorial demands.   Unable to stand Benny's nonsense any longer, the crew walk out, leaving Jack literally hanging from a microphone boom.


I enjoyed the Jack Benny episode and it gave me the incentive to delve deeper into Natalie Wood's life and her career on television.  Natalie was born Natalia Nikolaevna Zacharenko on July 20, 1938 in San Francisco, California.  She was the daughter of Russian immigrants.  Her father, Nikolai Stepanovich Zakharenko, was a carpenter and he later became a studio set designer.  He changed the family name to "Gurdin" upon becoming an American citizen.  A younger sister, Svetlana (born March, 1 1946) also became an actress and is known by her stage name, Lana Wood.

Natalie's family moved to Santa Rosa, California soon after she was born.  They eventually settled in Los Angeles so that Natalie, whom they called Natasha (the diminutive for Natalia), could pursue a film career. She was cast in her first film role at the age of four in the 1943 movie Happy Land when a production company came to Santa Rosa.  It was only a small role as a crying little girl, but it was enough to encourage the Gurdens to move south to L.A.

Once in Hollywood, Natalie was given her first credited role in the 1946 film Tomorrow is Forever. co-starring Claudette Colbert, Orson Welles and George Brent. That same year, she also starred alongside Barbara Stanwyck and Robert Cummings in a romantic comedy, The Bride Wore Boots.  Then came the role that made her a child star, that of Susan Walker, the little girl who didn't believe in Santa Claus, in 1947's Miracle on 34th Street.  As an eight-year-old, Natalie and co-stars Maureen O'Hara, John Payne and Edmund Gwenn captured the hearts of filmgoers in this timeless Yuletide classic and she went on to make a number of movies during her childhood.

When Natalie Wood was about 15 years old, she was cast in her first recurring role in a television series, a half-hour situation comedy called The Pride of the Family.  The Pride of the Family aired on ABC from 1953 to 1954 and there were only 40 episodes of the show.  It starred Paul Hartman as Albie Morrison,, a bumbling husband and father, who worked in the advertising department of a small town newspaper.  Fay Wray, of King Kong fame, portrayed his wife, Catherine Morrison, while Natalie played 15-year-old daughter, Ann Morrison, and Bobby Hyatt played their 14-year-old son, Junior.  Below is a photo of the cast of The Pride of the Family.

Here is some trivia about The Pride of the Family:

Paul Hartman went on to play Emmett Clark, owner of a fix-it store, on The Andy Griffith Show.and Mayberry R.F.D. during the late 1960s.  From 1968 to 1969, he also portrayed Bert Smedley on Petticoat Junction.  Hartman died of a heart attack on October 2, 1973.

Robert "Bobby" Hyatt had a small, uncredited role in Miracle on 34th Street, the Christmas classic that made Natalie a star.  Hyatt died on September 27, 2007 of cancer.  He was 67 years old.  Canadian-born Fay Wray passed away on August 8, 2004 at the age of 96.

Below is a photo of Natalie Wood and Tom Bernard in a scene from The Pride of the Family.  Bernard played Tom in two 1954 episodes of the sitcom. 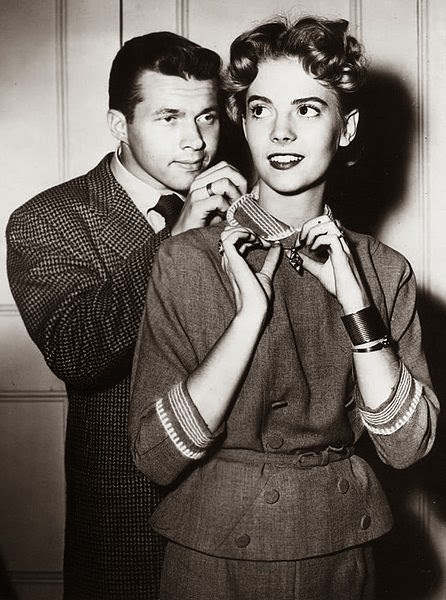 After The Pride of the Family, Natalie appeared in four episodes of a short-lived series called Mayor of the Town.  It was a syndicated show that aired from 1954 to 1955.  Mayor of the Town chronicled the life of Thomas Russell, mayor of the small community of Springdale.  Oscar winner Thomas Mitchell played the title role and Natalie portrayed a character named June.

During the 1950s, Natalie's television work included a role in an episode of the crime/drama series Public Defender starring Reed Hadley.  In an episode entitled "Return of the Dead" (Season 2, Episode, Air Date: September 9, 1954), she played Renee Marchand, a teenager who is accused of attempted murder.  She also made two appearances in the drama anthology Studio 57. as Sheila Mason in "The Plot Against Miss Pomeroy" (Season 1, Episode 5, Air Date: October 1, 1954) and in "Little Miss Bedford" (Season 3, Episode 33, Air Date June 9, 1957).  Her co-stars in "Little Miss Bedford: were Hugh Cronyn and Jessica Tandy.

After breaking up with Richard Gregson, Natalie resumed her relationship with Robert Wagner, whom she remarried on July 16, 1972.  She and Wagner had a daughter, Courtney Brooke Wagner, born on March 9, 1974.  R.J. also adopted Natalie's other daughter, Natasha.


During the 1970s, Natalie Wood made two cameo appearances on the TV detective series Switch, starring husband Robert Wagner and Eddie Albert.  She had an uncredited part as a cruise ship passenger in an episode of the series entitled "The Cruise Ship Passenger" (Season 1, Episode 9, Air Date: November 11, 1975) and she played "the girl in the bubble bath" in an episode called "The Cage" (Season 3, Episode 20, Air Date: June 25, 1978).

In 1973, Natalie and Robert Wagner starred in a made-for-TV movie called The Affair. Natalie played Courtney Patterson, a disabled songwriter and Wagner portrayed Marcus Simon, a lawyer who falls in love with her, although Courtney's family is opposed to their relationship.  The Affair originally aired on November 20, 1973. 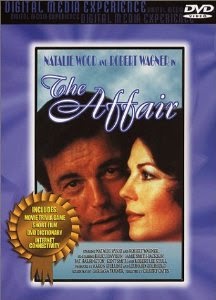 In 1976, Natalie took on the role of Margaret "Maggie the Cat" in a television adaptation of the Tennessee Williams play, Cat on a Hot Tin Roof.  Robert Wagner portrayed Maggie's husband, Brick, and the star-studded cast included the great Laurence Olivier as Big Daddy and Maureen Stapleton as Big Mama. Despite its stellar cast, the production only received mixed reviews. 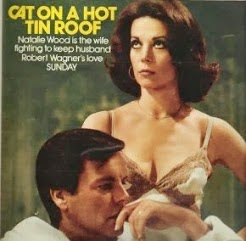 Natalie also appeared in a cameo role as a movie star in the pilot film for Hart to Hart, Wagner's hit television series in which he starred with Stefanie Powers.  The pilot aired on August 25, 1979 and Natalie was credited as Natasha Gurdin.


Natalie Wood won a Golden Globe Award for Best TV Actress for her performance in a 1979 television remake of the 1953 film From Here to Eternity, based on the 1951 novel  by James Jones. Natalie portrayed Karen Holmses in the 6-hour TV mini-series, the role made famous by Deborah Kerr in the movie.  Her co-star was William Devane. Devane played Sgt. Milton Warden, the Burt Lancaster role. Natalie's character, Karen Holmes, with whom Sgt. Warden has an affair, is the wife of Warden's commanding officer.  The sweeping mini-series originally aired on ABC beginning on February 14, 1979. 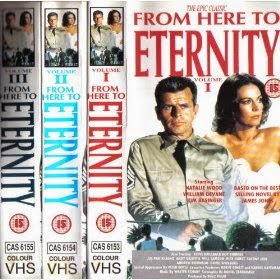 In 1979, Natalie also starred in a television movie called The Cracker Factory.  She played the lead role of Cassie Barrett, an alcoholic housewife in suburban Cleveland who has a nervous breakdown and drifts in and out of psychiatric wards.  The Cracker Factory is based on a best-selling 1977 novel by Joyce Rebeta-Burditt.  It was broadcast on ABC on March 16, 1979.

Natalie's life ended in tragedy on November 29, 1981.  She was 43 years old when she drowned near Catalina Island California during a trip aboard her yacht, the Splendour, with Robert Wagner.  At the time of her death, she was working on a science film called Brainstorm with co-star Christopher Walken, who was also aboard the yacht with Wood and Wagner.

A re-investigation into the circumstances of Natalie's death began in 2011 after the yacht's captain, Dennis Darvin, claimed he overheard an argument between Natalie and R.J.on the night of her disappearance and blamed Wagner for her death.   In January of 2013, coroner's officials released a new report that explained the reasons why and the word "accidental" was removed from Natalie's death certificate and changed to "drowning and other undetermined factors."  Investigators apparently couldn't rule out that some of the bruises and marks on her body occurred before she entered the water.

There have been many rumours, conflicting versions and much speculation regarding Natalie's demise, particularly where Wagner and Walken are concerned.  However, no criminal charges have laid to date with regard to the case.  In his 2008 autobiography, Pieces of My Heart, Robert Wagner stated that he and Christopher Walken had argued that night.  He wrote that he had stayed up for awhile, but when he went to bed, Natalie and a dinghy that had been attached to the yacht had vanished.

* Natalie Wood's daughter, Natasha,, known as Natasha Gregson Wagner, is now 43 years old.  She is an actress.  Her first film role was in the 1992 film Fathers & Sons and she had a small part as Cassandra in the 1992 movie Buffy the Vampire Slayer. Natasha also played the role of Tibby in the 1995 Hart to Hart TV movie, Hart to Hart: Secrets of the Hart.

After a lengthy relationship with Joshua Evans, son of Ali MacGraw and producer Robert Evans, Natasha married D.V. DeVincentis in 2003.  The couple divorced in 2008.  On May 30, 2012, Gregson Wagner and her partner, actor Barry Watson, became the parents of a daughter, Clover Clementyne Watson - Natalie's granddaughter.

* In April of 2012, Natalie's younger daughter, Courtney, was arrested for cocaine and heroine possession after police investigated a report of gunshots coming from her residence in Malibu, California.