Well, fans, are you enjoying the November sweeps?  Victoria has finally had her baby - in the janitor's room in the Jabot parking garage.  The Princess gave birth in dramatic fashion with the help of the two prospective fathers - Billy Boy and Stich 'em Up.  What strange births they have on Y&R! No one seems to be able to get to a hospital.  Summer was born in an elevator at Jabot with the help of Jack Abbott. Delia was born when Chloe was at the Abbott cabin and there was no time to take her to a hospital.  She was delivered at the cabin by Billy Boy Abbot, Lily Winers and Sugar Cane Ashby.  If you remember, Traci Abbott didn't have time to get to the hospital either when she gave birth to her daughter Colleen. It was her then-husband Brad Carlton who delivered Colleen.

I'm not surprised that Victoria had a baby girl.  There are already two baby boys on the show, Connor and Johnny.  The Princess is the mother of two sons, Reed and Johnny.  So it's time she had a daughter.  It'also time to find out who the father of the sweet little child is (I hope the little one is not contaminated by that precious Newman blood).  Grandpa Victor is certainly thrilled about the birth because he has another grandchild to control and lavish money upon.  He was already planning her life in the hospital room with Victoria and I'm sure she'll soon have her own horse at the ranch.

Jack Abbott, thy name is WIMP!  Is any character on The Young and the Restless as spineless as Smilin' Jack?  In his dilemma over Phyllis and Kelly, he has shown absolutely no backbone.  He has delayed and hemmed and hawed, while being dishonest with both women.  Is it any wonder he has egg all over his face?  If he can get out of this one, he's a better escape artist than Harry Houdini.

Right now, it appears that Kelly is out in the cold and that Phyllis is the winner of the Spineless Sweepstakes.  The redhead certainly has the upper hand.  However, Phyllis may be setting Jellyfish Jack up for a fall in order to get revenge.  Since coming out of her coma, she has been extremely vindictive. Perhaps this is all part of scheme on Phyllis' part to punish Jack.  Maybe she'll dump him in the end and he will be left alone and humiliated.

Don't underestimate Kelly either.  She may have a voice as sweet as honey, but that doesn't mean she'll sit back and allow Phyllis to walk all over her.  She may not be that easily intimidated by Phyllis's tactics.

In situations such as this, Jack would normally receive some sage advice from the ghost of his late father, John Abbott,, played by Jerry Douglas.  Jerry, however, has not made any appearances on the show lately. Does this mean that John Abbott given up the ghost?

Nicholas Newman is really turning me off.  He's so self-righteous!  Who is he to judge with his track record?  Hasn't Sharon suffered enough?  Hasn't she paid a steep price for her actions?  Why does self-centred Nick have to rub more salt in her wounds by seeking sole custody of Faith?  It seems to me that Nick is being extremely vindictive and that he is displaying behaviour worthy of his father, the ruthless Victor Newman.

At least Mariah and Noah have displayed some sympathy for Sharon.  Although Sharon is far from perfect, she does try to be a good mother to her children, and Faith is far too young to be cut off from her.  Good for Noah too for standing up for his mother when Supergirl Summer was criticizing her. As if Supergirl's mom has been a paragon of virtue!

Please say it ain't so!  It's beginning to look more and more like Michael Baldwin is going to die. Given executive producer Jill Farren Phelps' penchant for killing off veteran characters, it's likely that Michael will soon be leaving this mortal coil - unless there is going to be some twist in the plot.  That seems unlikely, though. The writers probably want to free up Lauren for future romantic entanglements. The rumours about Christian LeBlanc leaving the show have been flying for quite a while now.  There has been an online fan petition to keep him on the show since early October.  If you are interested, here is the link.

Christian LeBlanc is a fine actor and a Daytime Emmy winner. So is Billy Miller (ex-Billy Abbott), but Y&R didn't keep him on the show.  If LeBlanc departs, he may join Billy and Michelle Stafford (ex-Phyllis Newman) on General Hospital. GH may scoop him up fast to add to their growing pantheon of former Y&R greats.  Michael Muhney (ex-Adam Newman) is waiting in the wings too.

Victor Newman crosses the bounds of decency over and over.  Yet so many people tell him he's right. He had some nerve to waltz into a hospital room and upset a person who had just suffered an heart attack and had undergone bypass surgery. Yet that's exactly what he did to Maureen!  Maureen, of course, should never have locked the pregnant Princess Victoria in the janitor's room.  However, to scold and threaten an ill woman is unconscionable.  It's also classic Victor Newmann.

Victor could have caused Maureen to die.  In the real world, a nurse would have stepped in to stop The Big Man from harassing a sick patient.  Nikki, by the way, was almost as bad.  Why didn't she tell The Black Knight to ease up on the unfortunate woman?  Why didn't she tell Victor that his reprimands could wait until Maureen was in better health.  As for Stitch'em Up's mommy, she's in for a really rough time.  Victor's parting words were, "I'll be your worst nightmare."  I have no doubt that he will.

Good news for fans of Steve Burton (Dylan McAvoy).  The actor has signed a new contract with the Y&R and has extended his stay on the show for another year. Burton joined the cast of The Young and the Restless in 2013.

I'm pleased that he's sticking around Genoa City because I want to see how the conflict between Avery's ex, Joe Clark, and Dylan plays out.  It's a David and Goliath situation, with Dylan as the underdog.

Summer is no longer a blonde.  Supergirl has changed her hair colour.  It's now a reddish brown shade now, closer to Gina Tognoni's (Phyllis) colour.  Is she trying to look more like her television mother?

In my last Y&R Report, I mentioned that I was planning to see Doug Davidson (Paul Williams) On November 9th at the National Women's Show here in Toronto.  I was there and it was a pleasure to be in Doug's company.  Regular readers know that I joke about his character, Paul Williams, quite frequently, often referring to him as "Clueless"  However, Doug is a great guy and very down to earth.  By the way, someone in the audience asked him if he prefers playing Paul as Genoa's City's police chief rather than as a private eye.  Doug answered that he prefers portraying Paul as police chief because he likes to wear a badge.

A native of California, Doug was born in Glendale on October 24, 1954.  He has been married to actress Cindy Fisher since 1984.  The two met in the early 1980s when Cindy played Dana in the "cult" storyline.

Doug and Cindy have two 20-something children, daughter Calyssa and son Caden. When asked about his personal life, Doug expressed disappointment that he was unable to spend much time with them.  Calyssa, he said, lives in England while Caden, whom he has not seen for two years, resides in Taipei, Taiwan.

Doug has portrayed Paul Williams since 1978 and is the longest-serving member of the current cast. Although he is happy with his job, he regrets that it does not provide him with much flexibility for taking time off. 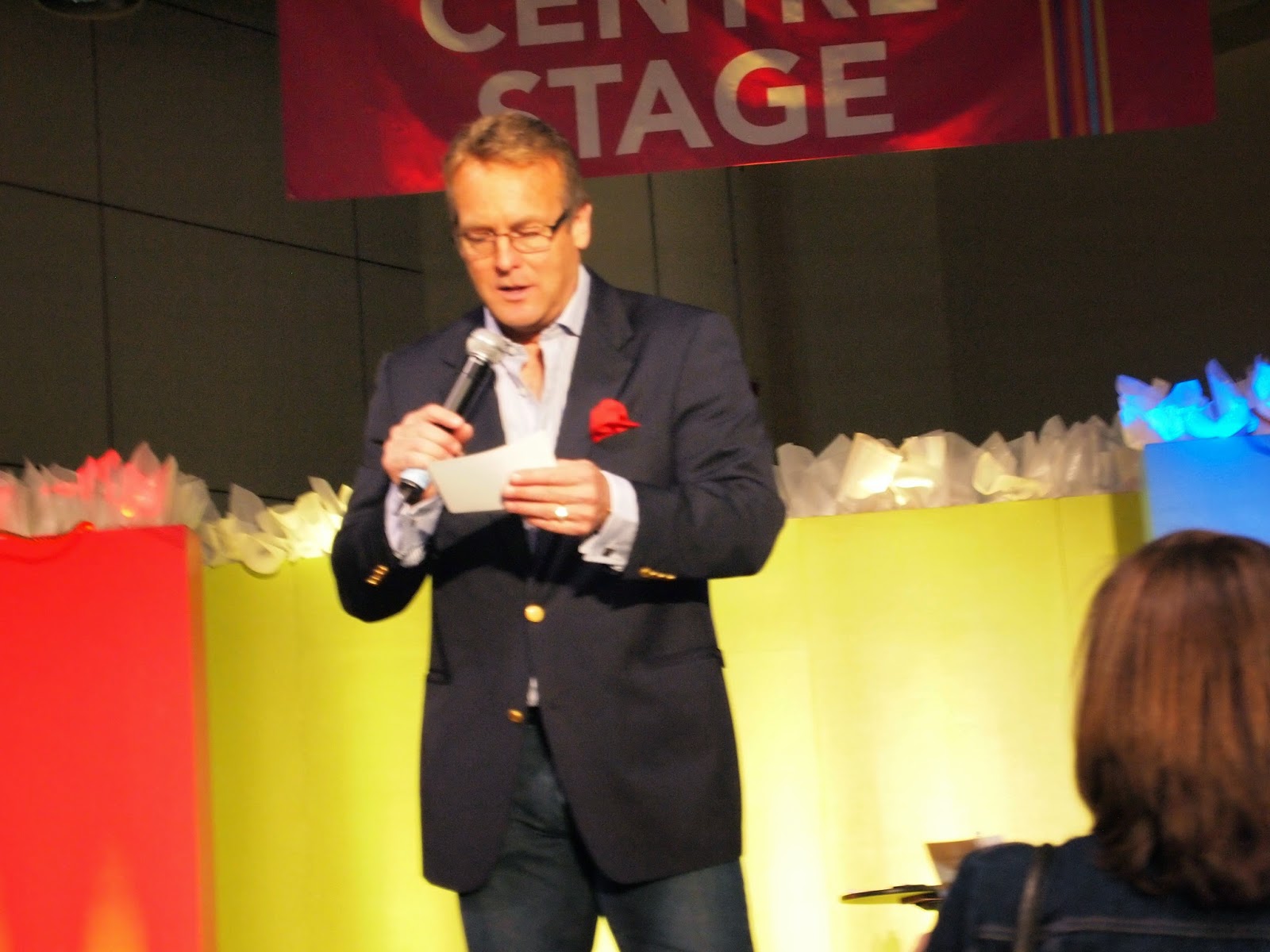 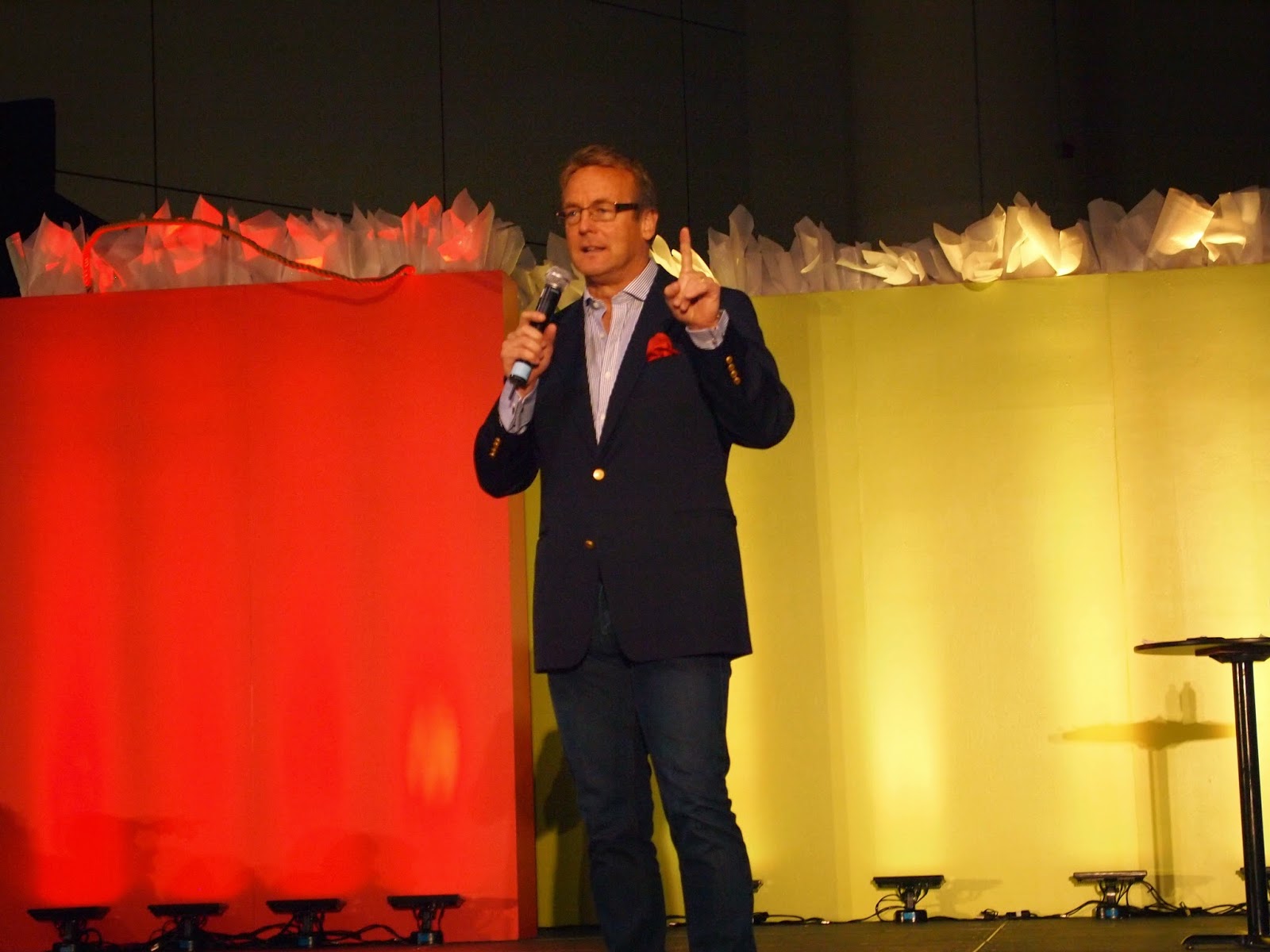 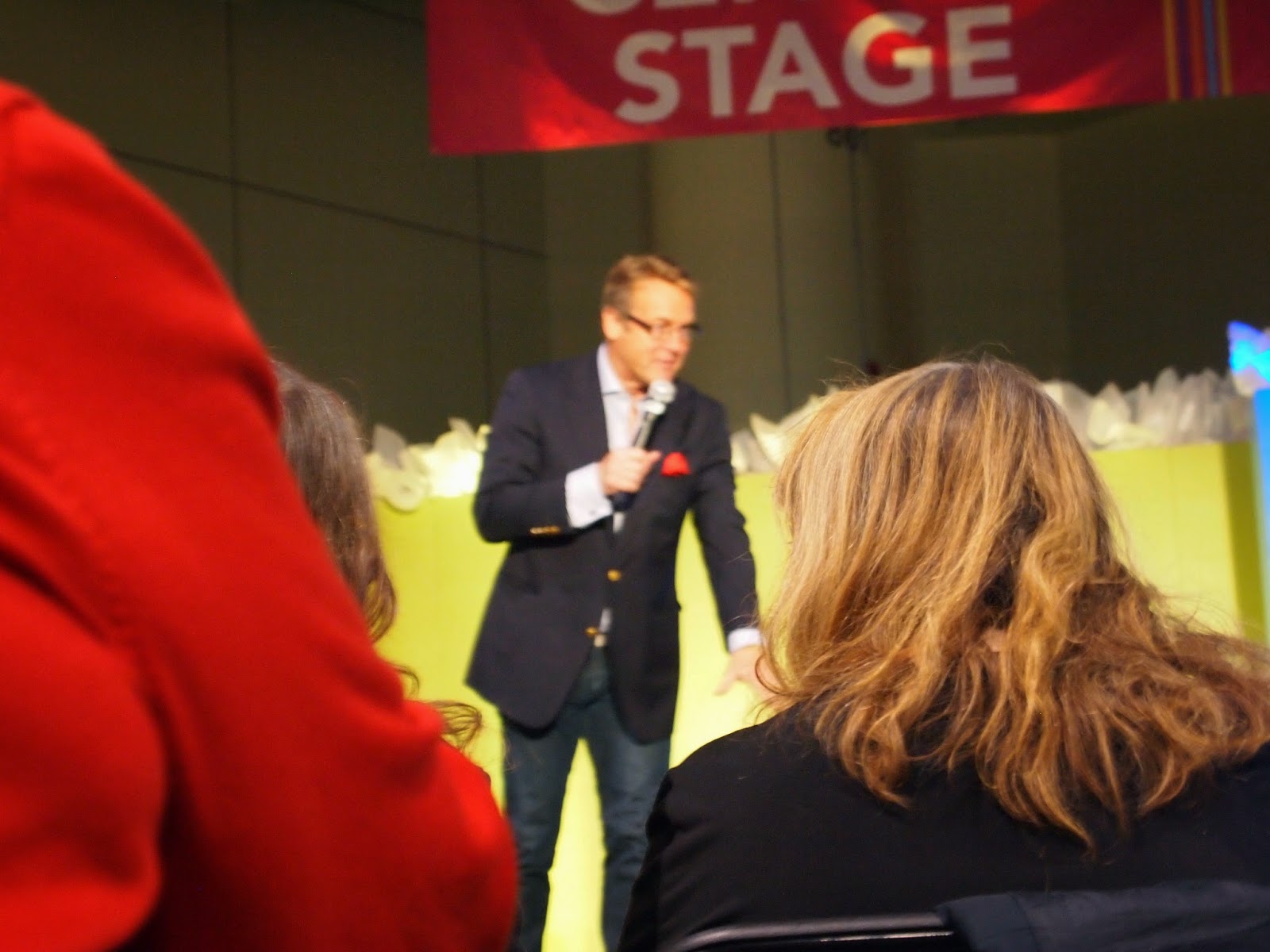 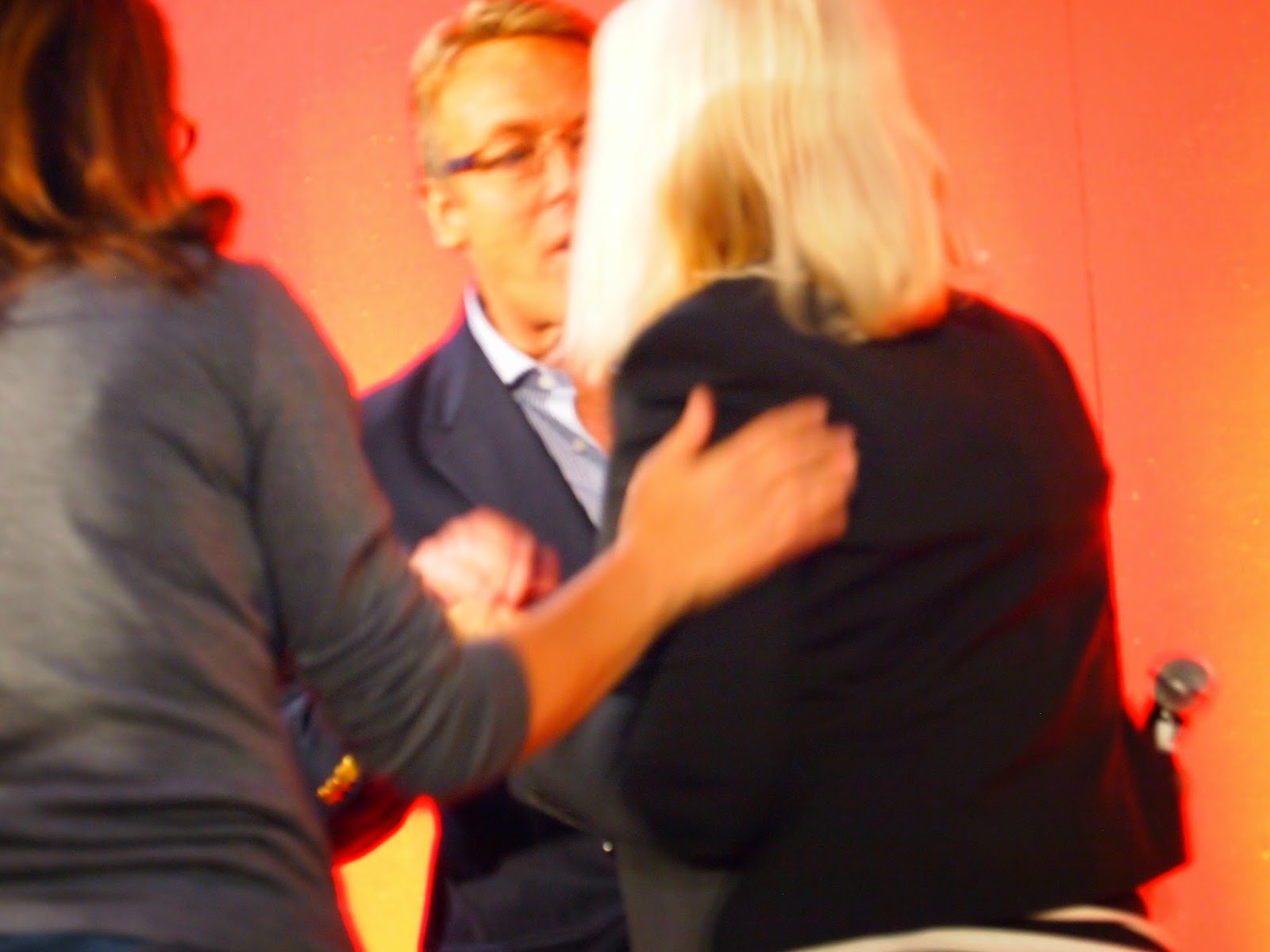 Do you think Michael Baldwin will die?

That's all for now.  Here's a reminder that the next edition of Y&R Report will be posted in this space on Saturday, December 6, 2014.