June Lockhart: Looking back at her career as she approaches her 90th birthday 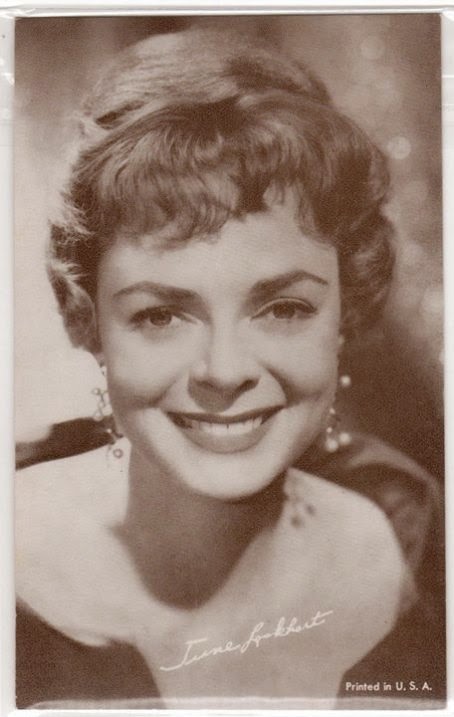 I'm not really affected whether or not the phone rings asking me to do a job.  When you're working, you're very professional and you do the work. You know your lines and you hit your marks and your collar's clean. There is a wonderful world out there besides what you do on screen.


June Lockhart should know about professionalism.  After all, her show business career has spanned more than eight decades.  June, who will turn 90 years old this year, has the perfect pedigree,for an actress. She was born on June 25, 1925 in New York City, the daughter of Eugene "Gene" Lockhart, a Canadian-born actor, singer and playwright, and Kathleen Lockhart (nee Arthur), an English-born stage actress and musician.  Gene, a native of London, Ontario, passed away on March 31, 1957 at the age of 65. Kathleen died in in 1978 at the age of 83.  June, the couple's only child, displayed her talent at an early age.  When she was eight years old, she made her professional debut in a Metropolitan Opera production of Peter Ibbetson.  She played Mimsey in the dream sequence.

Meanwhile, Gene Lockhart gained prominence on Broadway in 1933 after appearing as Uncle Sid in Eugene O'Neill's Ah, Wildesness!, alongside his wife, Kathleen. In the mid-1930s, however, the Lockharts left New York and headed westward to California where Gene enjoyed a successful career as a Hollywood character actor.

Young June made her screen debut in the 1938 film version of A Christmas Carol starring British character Reginald Owen.  Her parents, Gene and Kathleen, portrayed the Cratchits, while 13-year-old June portrayed one of their children, Belinda Cratchit.


June Lockhart's parents made sure that their daughter performed in quality films. A list of her early movies includes appearances in All This, and Heaven Too (1940), Sergeant York (1941), The White Cliffs of Dover (1944) and Meet Me in St. Louis (1944).  Before graduating from high school, June had already worked alongside such Hollywood legends as Gary Cooper (Sergeant York), Bette Davis (All This, and Heaven Too, and Ingrid Bergman (Adam Had Four Sons).

June made her Broadway debut in 1947 in the comedy For Love or Money opposite British-born actor John Loder.  She took New York by storm, winning a Tony Award in 1948 in the category of "Outstanding Performance by a Newcomer" (a category that no longer exists) for her role as the ingenue.

From 1958 until 1964, June portrayed Ruth Martin on the classic TV show Lassie. She joined the cast as a replacement for Cloris Leachman who had originally played the role of Ruth, a devoted farm wife and the adoptive mother of an orphaned boy named Timmy.  Leachman had been unhappy and producer Jack Wrather replaced her as soon as the show's fourth season drew to a close. In his online memoir, "Recollections," Jon Provost, who portrayed Timmy Martin, wrote: "Cloris did not feel particularly challenged by the role.  Basically, when she realized that all she'd be doing was baking cookies, she wanted out."

June Lockhart took over the part of Ruth Martin at the beginning of Lassie's fifth season and remained with the show for six years.  In 1959, she earned an Emmy nomination for her performance in the role.  June's first appearance on the show was in an episode called "The Storm" (Season 5, Episode 1, Air Date: September 7, 1958). She played Ruth Martin in 207 episodes of Lassie, until the beginning of the show's 11th season in 1964.  (Prior to the 1964-1965 season, the series was completely revamped with the Martin family moving to Australia without Lassie. The loyal collie began working with the U.S. Forest Service workers instead, and the show the show continued until 1974).  Below are photos of June with Lassie. 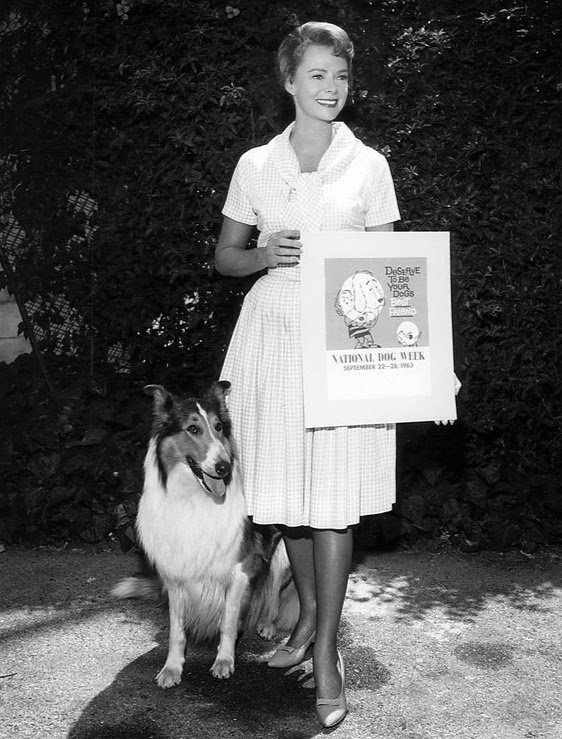 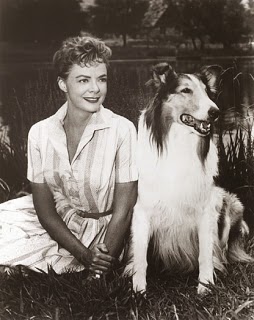 In the 1950s, June was a panelist on a TV game show called Who Said That?, along with some renowned White House correspondents, including broadcaster H.V. Kaltenborn. She held them in such high esteem that she requested permission to travel with them  Her request was approved by President Dwight D. Eisenhower's press secretary.

In 1964, June guest-starred in an episode of Perry Mason entitled "The Case of the Scandalous Sculptor" (Season 8, Episode 3, Air Date: October 8, 1964).  She played the role of Mona Stanton Harvey, a wealthy woman whose husband tries to obtain $10,000 to pay a blackmailer.  He devises his own blackmail scheme involving a model.  When the model is murdered, however, Mona is charged.

That same year, June also appeared in episodes of such popular TV shows as Bewitched, Voyage to the Bottom of the Sea and The Man from Uncle.  In the Bewitched episode, entitled "Little Pitchers Have Big Fears" (Season 1, Episode 6, Air Date: October 22, 1964), she played Mrs. Burns, the widowed mother of a young boy who wants to try out for the baseball team despite the fears of his overprotective mom.

From 1965 to 1968, June co-starred in the popular science fiction television series Lost in Space.  She played the role of Dr. Maureen Robinson, a biochemist, and the wife of Dr. John Robinson (Guy Williams),  Professor Robinson is an astrophysicist specializing in applied planetary geology and he is the commander of the spaceship Jupiter 2.  The Jupiter 2 is part of a historic American mission to colonize deep space, which includes the couple's three children, Judy (Marta Kristen), Penny (Angela Carttwright) and Will (Billy Mumy) and Major Don West (Mark Goddard).  There is a stowaway too, the cowardly enemy agent, Dr. Zachary Smith (Jonathan Harris). Oh yes, The Robot is also aboard, he of the famous catchphrase "Danger, Will Robinson!  Danger!

The Jupiter 2 goes off course and the Space Family Robinson, becomes . . . well, lost in space. However, the space travellers experience weekly adventures on various planets as they try to find their way to their destination.  The show displayed an interesting array of special effects, especially once it began filming in colour.  It's interesting to note that only the first season was shot in black and white.


When Lost in Space ended its run, June joined the cast of Petticoat Junction.  From 1968 until 1970, she played the role of Dr. Janet Craig on the hit CBS sitcom.  Dr. Janet arrived in the tiny rural town of Hooterville and rented a room at the Shady Rest Hotel, which had been run by Joe Carson (Edgar Buchanan) since the departure of his niece, Kate Bradley (Kate had been played by Bea Benaderet, who died in 1968). By 1970, the popularity of the rural-based sitcoms on CBS was waning and Petticoat Junction was cancelled.

In 1974, June guest starred on Marcus Welby, M.D. and Adam-12.  In 1975, she played the role of Mrs. Bowman in an episode of Police Story.  In 1976, she made an appearance on Happy Days in an episode called "Two Angry Men" (Season 3, Episode 20, Air Date: February 3, 1976), playing Judge MacBride (Howard Cunningham ends up in a small claims court after Fonzi's pigeon coup crashes down into his apartment).

In 1985, June played a character named Beryl Hayward in an episode of Murder, She Wrote, the long-running Angela Lansbury murder mystery series.  She appeared in an episode entitled "School for Scandal" (Season 2, Episode 4, Air Date: October 25, 1985).  Polly Bergen, Roddy McDowell and John Vernon also appeared in the same episode.  What a stellar cast!

In the first photo below, June poses for a publicity shot with Bob Saget and Ashley Olsen.  The second photo is a scene from the episode "Matchmaker Michelle." 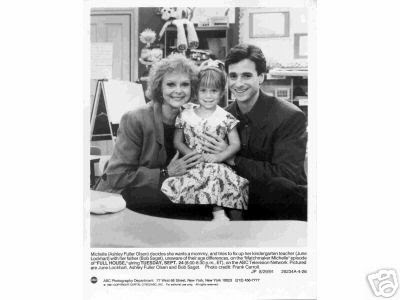 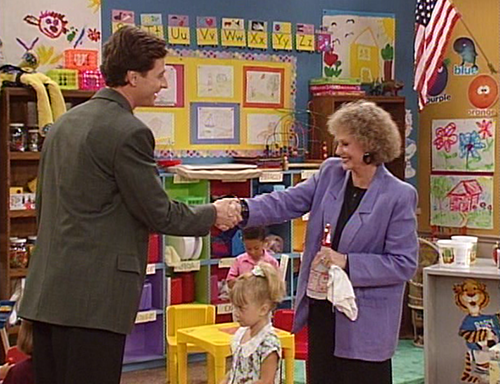 In the 21st century, June Lockhart has continued to be active.  In 2002, she appeared in two successive episodes of The Drew Carey Show as Misty Kiniski, the mother Louis Kinski (Ryan Stiles).  In 2004, she played Betty Deline in an episode of Las Vegas entitled "You Can't Take it With You." (Season 1, Episode 17, Air Date: March 1, 2004).  She also portrayed Agnes in a 2006 episode of Grey's Anatomy entitled "Break on Through" (Season 2, Episode 15, Air Date: January 29, 2006). That same year, she guest starred as Muriel Bartleby on Cold Case ("Beatutiful Little Fool," Season 3, Episode 19, Air Date: April 9, 2006).  In February of 2013, she began filming for a video game with 3-D graphics called Tesla Effect: A Tex Murphy Adventure.

June Lockhart has been twice married and twice divorced.  On January 17, 1951, she wed Dr. John F. Maloney and they had two daughters.  Their first daughter, Anne Kathleen Mahoney, was born on September 6, 1953.  Anne became an actress and her professional name is Anne Lockhart.  A second daughter, June Elizabeth "Lizabeth" was born on November 21, 1955.  Lizabeth has also goes by the name "Lockhart."


June and Dr. Maloney divorced in 1959,  Later that same year, the actress married John C. Lindsay, a prominent architect.  She and Lindsay divorced circa 1970. Below is a photo of June and John with June's two daughters.  The family is about to board the inaugural flight of Western Airlines "Champagne Flights." 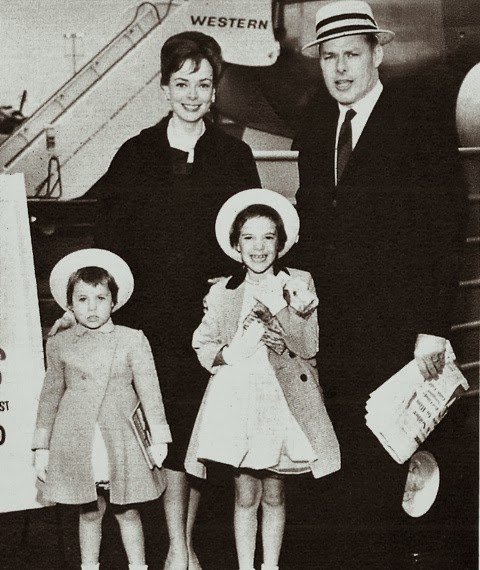 
* June has always had a keen interest in aviation and the space industry.  She has spent a great deal of time with astronauts and NASA officials and has witnessed space shuttle launches.  In an April, 2004 interview with Bob Edwards on National Public Radio (NPR), June described herself as an avid watcher of C-SPAN and a NASA groupie.  She said that astronauts have told her that Lost in Space inspired them.  "I did Lassie for six years and I never had anybody come up to me and say, 'It made me want to be a farmer," she quipped.

* In 1984, June began appearing intermittently in the role of Maria Ramirez on the popular daytime soap General Hospital.

* In an interview with KAOS2000 magazine at the the Comic Con International in San Diego in July, 2000, June was asked if she had a favourite role.  She replied, "Each for their own reasons.  I certainly enjoyed Lassie.  I'd be with it yet if they hadn't changed the format.  I loved Lost in Space. It was like going out in the sand. being in kindergarten, and playing space.  Petticoat Junction was wonderful.  It was a privilege to work with those great character actors and I did that the last years it was on, as you know . . ."