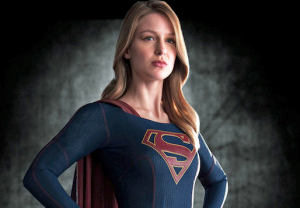 Female super heroes have been few and far between on television.  There was Batgirl in the classic Batman series of the 1960s, played by the Yvonne Craig who passed away on August 17, 2015. There was also Wonder Woman (1975-1979), starring Lynda Carter. Now there is a  fresh face, a 21st century female superhero on American TV.  This time it's Supergirl with 27-year-old Melissa Benoist portraying the title character in the new CBS series

Born on October 4, 1988 in Harris County, Texas, Melissa Marie Benoist is the daughter of Jim and Julie Benoist.  She was raised in Littleton, Colorado and graduated from Araprahoe High School in Centennial, Colorado (a suburb of Denver) in 2007.  In 2011, she graduated from Marymount Manhattan College in New York City.  Melissa has two sisters (Jessica and Kristina), and five half-siblings (Tanner, Estella, Coco, Rocket and Tor) from her father's remarriage.

From an early age, Melissa aspired to be an actress.  At 16, she made the following statement to journalist John Moore (as quoted in the Denver Post):  "I have known for a long time that acting is what I want to do, so I haven't really tried anything else. It's pretty much all I'm really good at that I have discovered yet.  It's so scary to think that, wow, could go straight into being a starving actor less than a year from now.  But I feel an obligation to go to college and get a degree. I just do."

While attending high school, Melissa played Kim MacAfee in a 2006 production of Bye Bye Birdie at Littleton's Town Hall Arts Center.  That same year, she was named by the Denver Poster as one of Colorado's "Can't-Miss-Kids."  In 2009, she had the title role in Marymount Manhattan College's mainstage production of Thoroughly Modern Millie.

Despite her many television appearances, Melissa, did not became well known until 2012 when she joined the cast of Fox TV's popular musical comedy-drama Glee as Marley Rose.  She first auditioned for the part in New York at the Roundabout Theatre Company and was required to go through five auditions with five different songs.  She started working the same day was given the recurring role of Marley, a transfer student at William McKinley High School, the fictional setting for Glee.  Marley was teased by classmates because she came from a low-income family and her overweight mother worked in the school cafeteria.  The character also suffered from an eating disorder.

On July 13, 2013, actor Cory Monteith, who played Finn Hudson on Glee, died of a drug overdose. In the wake of Monteith's death, Ryan Murphy, one of the show's creators. announced that the sixth season of the series would be its last.  Glee's final episode, entitled "Dreams Come True," aired on March 20, 2015.  Melissa's final appearance on show was in an episode entitled "The Untitled Rachel Berry Project," which aired on May 13, 2014.


In addition to her work in Glee, Melissa Benoist co-starred with Miles Teller in the 2014 Oscar-winning film Whiplash.  Teller portrayed Andrew Neiman, an ambitious young jazz drummer at a New York conservatory, while Melissa had the role of Nicole, a movie theatre concessionist who becomes his girlfriend.  Melissa followed her successes in Glee and Whiplash by heading the cast of Supergirl.

Supergirl has received mostly favourable reviews since its debut on October 26, 2015. It is based on the DC comics character Supergirl (Kara Zor-El), one of the last survivors of the doomed plant Krypton.  Kara is the biological cousin of Kal-El (better know as Superman), who was rocketed to Earth by his scientist father, Jor-El and raised by Kansas farmers Jonathan and Martha Kent.

Unlike cousin Superman,who lives in Metropolis disguised as Daily Planet reporter Clark Kent, Supergirl Kara resides in National City.  She was raised by the Danvers family.  Her adoptive sister, Alex Danvers (Chyler Lee) is a scientist who works for the Department of Extra-normal Operations (DEO).  The DEO a fictional government agency (originally devised by DC Comics) that purportedly regulates those with superpowers.  It is headed by former CIA agent Hank Henshaw (David Harewood), who has been concealing the fact that his eyes are able to glow red (in other words, he is probably an alien himself).

Helen Slater portrays Kara's adoptive mother, Eliza Danvers, who is also a scientist and works for Henshaw at the DEO. Jeremy Jones plays the role Winslow "Winn" Schott, Jr., a technology specialist who is Cara's co-worker at CatCo.  Winn is a strong ally of Kara and helped her create a costume resilient enough to endure her high speed movements.

Dean Cain plays Kara's adoptive father, Jeremiah Danvers, who volunteered to work for the DEO and share his knowledge of Kyrpton in order to protect Kara.  He is thought to have been killed in an accident years later. (It's interesting to note that Cain played Clark Kent/Superman in The Adventures of Lois and Clark).

So, what's it like to play Supegirl?  What does Melissa Benoist think of her think of her character, Kara, and does she enjoy wearing the Supergirl costume?  Of her character, she told E! News that she hopes that her portrayal of Kara will inspire. "I just would like her journey to be something that any person could relate to and/or be affected by and inspired by.  I think part of the draw of the comic book genre is that it is a way to escape and be inspired by something and be something greater than yourself: A strong being that can accomplish the unthinkable," she declared.

When queried by Teen Vogue magazine as to whether her costume was comfortable, Melissa responded, "Yeah!  It  feels like a dance outfit most of the time.  Sometimes . . . not so much.  I've got layers upon layers of clothing on."  By the way,  Supergirl's outfit was designed by Colleen Atwood, who has also created costumes for superheroes The Flash and Arrow.

Despite Supergirl's strong feminist credentials as an empowered female, the show has taken some flack from feminists over the fact that Kara, at the age of 24, is referred to as "Supergirl" rather than "Superwoman."  On October 26, 2015, Melissa appeared on The Late Show with Stephen Colbert.  When asked by host Colbert if she liked that the show had a feminist message, she replied, "Of course I do.  And what's feminist about it is that it's for everyone.  She has all the same power he (Superman) has."


In March of 2015, Melissa secretly married actor-singer Blake Jenner and the newlyweds honeymooned in Europe.  Born August 27, 1992 in Miami, Florida, Blake is the son of an American-born father and a Cuban-born mother.  He and Melissa met in 2012 on the set of Glee (Blake played the role of high school football player Ryder Lynn during the show's fourth and fifth seasons). Melissa's character, Marley, was involved in a love triangle with Ryder and bad boy Jake Pukerman, played by Jacob Artist)

* Blake Jenner will have a recurring role in the Supergirl series.  He has been cast as Adam Foster, a mysterious character from Cat Grant's (Calista Flockhart) past and a potential love interest for Kara. According to E! News, Blake's first appearance on the show will occur in early 2016.


EDITOR'S UPDATE: On December 27, 2016, TMZ announced that Melissa Benoist had filed for divorce from Blake Jenner.  According to TMZ, in the court documents, Melissa cites "irreconcilable differences" as the reason for the breakup.  Blake has appeared on two episodes of Supergirl.
EDITOR'S UPDATE: Melissa Benoist married actor Chris Wood, her Supergirl co-star, on September 1, 2019.  She gave birth to their son, Huxley Robert Wood, in September 2020.
Posted by Joanne at 10:16 PM