I'm not too impressed with these chintzy, makeshift weddings they've been having on The Young and the Restless recently. Sharon and Dylan are the latest couple to tie the knot in this haphazard fashion. They just cobbled the ceremony together.  It was bizarre to see clueless police chief Paul Williams officiating the nuptials in a Santa outfit.  Add him to the growing list of characters on the show who have been ordained online.  Remember how Kyle married Nick and Sage?  Is this some kind of a trend or is Y&R trying to save money by not having to pay another actor to play a minister or a justice of the peace?  I wonder . . .  No, the show's producers wouldn't be such penny pinchers, would they?

Mariah seems to be more astute than many of the other characters.  While Dylan, Sharon and Nick all seem to think the evil Dr. Anderson has been so helpful, Mariah remains skeptical and suspicious. She is smart enough to sense that something is not right with the wicked therapist.

What in tarnation is wrong with Sage and Nick?  Why can't either of them recognize "Sully" as Christian?  They have both looked directly at the child and they still aren't aware of his real identity. That's hard to believe, even for a soap.  Nick didn't even react when Faith asked if he thought Sully resembled Dylan or Sharon more.  It just didn't register with him.

Billy Abbott's life has certainly taken a downward spiral of late.  Victoria won't given him another chance and Victor is making his life miserable.  Even his own brother, Jack, has kicked him out of his job at Jabot.  Nothing has been going right for him, although he hasn't exactly displayed the best judgement in the world.  He just keeps messing things up. However, in Billy's defence, I must say he was right on the money when he pointed out that Victoria always forgives Victor for his many transgressions, so why can't she give him another chance?  When it comes to daddy, Victoria operates on a double standard. She should be reminded that for all his faults and poor choices, Billy has not done nearly as many terrible things as Victor.  Yet, Victor is sitting on top of the world this Christmas, while Billy Boy is about to hit rock bottom.

Billy Abbott's woes are occurring just as another actor, Jason Thompson,  is about to take over the role from Burgess Jenkins.  It will be fascinating to see how Thompson portrays Billy and how he will make his own mark on the character.  Note to Canadian fans: Jason Thompson was born in St. Albert, Alberta.  Yes, he's one of us.  He's a Canuck.

There's no other way to say it.  Jack Abbott wimped out.  I'm so disappointed.  I was really hoping he'd reveal the truth about Victor at that press conference.  As I've written many times before, the Black Knight's dastardly deeds really need to be exposed.  I should have known better, though, than to expect Victor Newman to get his comeuppance.  The writers will always make him come out the winner.  Just look at him now.  The Abbott family had to pay him a half a billion dollars and he is strutting around as happy as a lark.  He's even having a great old time taunting Jack.  The Great Victor Newman is probably going to get credit from the FBI for helping to bring down the shady Santori family.

What's happened to the Esther storyline?  She's supposed to be working at Dylan's coffeehouse, but viewers haven't seen her for quite a while.  What's going on?  Why don't the writers get her involved in a storyline before viewers forget about her new life away from the Chancellor mansion?  To start something and then leave it hanging for a long time is just shoddy writing.

What about Jill?  She's barely onscreen anymore.  It looks as though the writers can't come up with a decent storyline for her.  Lauren hasn't been around much lately either.

I could be wrong, but I sensed a spark between Ashley Abbott and Dr. Simon Neville. Perhaps a romance between the two is in the works, especially now that they'll be working together on medical research.  Also, I think Neville is gong to help Ashley with her neurological condition.   I'd like to see them get together, but then what about Abby and Dr. Stitch? If Ashley becomes involved with Neville, it would mean smooth sailing for her daughter and Rayburn.  However, we all know there have to be complications for soap couples. It comes with the territory.

Mara McCaffray joins the cast of Y&R as Natalie 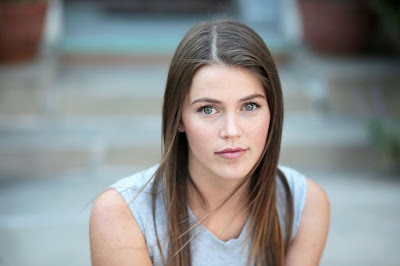 Mara McCaffrary is coming to Genoa City in the recurring role of Natalie, a computer whiz. Natalie is the Swiss hacker that Kevin met in Geneva and with whom he has become quite chummy. Although Mariah's been trying to hide her true feelings, she seems quite jealous of Kevin's new friend.  She had better be prepared to face stiff competition for Kevin's affections from the mysterious Swiss Miss.

Mara McCaffray is a recent graduate of Wake Forest University in Winston-Salem, North Carolina. Her film credits include Ordinary Wilderness,(2012) and Got No Fetish (2015).  She will make her Y&R debut on Friday, January 15, 2016 (CBS) and Thursday, January 14, 2016 (Global TV in Canada).

Alyvia Alyn Lind (Faith Newman) is making a name for herself

Did you catch Alyvia Alyn Lind's performance in the role of Dolly Parton as a child?  She portrayed the legendary country singer in a December 10th holiday special entitled Dolly Parton's Coat of Many Colors.  The eight-year-old did a great job, even with the Tennessee twang that was required for the part.  If you missed this Yuletide treat, you still have another chance to watch it.  NBC will rebroadcast the special on Christmas Eve.

Young Alyvia also sang "Silent Night" in a recent episode of the Y&R.

On Sunday December 6th, I attended OpportuniTeas with Kate Linder and Friends From The Young and the Restless at the Fairmont Royal York Hotel in Toronto.  The following Y&R stars appeared at this event in support of the March of Dimes:  Kate Linder (Esther) Valentine, Christian LeBlanc (Michael Baldwin), Camryn Grimes (Mariah Copeland), Melissa Ordway (Abby Newman) and Robert Adamson (Noah Newman).  High Tea was served and then there was a Question & Answer session.  This was followed by an auction of Y&R memorabilia, including clothes worn by characters on the show.  At the end, the stars signed autographs.

Camryn Grimes agreed to auction off the well known picture that Cassie supposedly drew of her family, the one that was always shown at Nick and Sharon's place on the Newman ranch.  Camryn actually drew the picture herself when she was child.  In case your wondering, a replica was made to use on the show.  Camyn, who has a good sense of humour, quipped that it's the only piece of art she's done that would ever sell.  When I spoke o her during the autograph session, she told me that this was her first visit to Toronto and Canada.

According to Camryn, Greg Rikaart (Kevin Fisher) always makes her laugh and the two are constantly joking on the set.  Oh yes, she likes cats and she does powerlifting,

During the Q&A, Robert Adamson (Noah) was asked to mention something about himself that people find surprising.  He said that most people are surprised to learn that he's "not that young." He's thirty years old and has a baby daughter (born June 12, 2014) with his former fiancée, Linsey Godfrey, who plays Caroline Spencer Forrester on The Bold and the Beautiful.

Melissa Ordway (Abby Newman) has been married for two years and she was asked how her husband reacts to her love scenes with Dr. Stitch.  She said he doesn't like watching the scenes, but realizes it's part of the business she's in.


Unfortunately, during the Q&A, none of the stars revealed any scoops. Sometimes, they don't even know what's going to happen themselves.  Still, I wish I had some nice, juicy scoop for you.  Oh well!  Sorry.

Some final notes about the Y&R Tea:  Camryn Grimes brought some authentic coffee cups from the set of Crimson Lights   I purchased one and had it autographed.  All the Y&R actors in attendance deserve credit for giving their time and energy to a worthy cause, in particular Kate Linder (Esther) and Christian LeBlanc (Michael Baldwin).  They conducted the auction.


Is Dr. Simon Neville a good match for Ashley?

That's all for now.  The next edition of Y&R Report will appear in this space on Saturday, January 2, 2016.  I'm looking forward to watching all the Christmas and New Year's episodes on Y&R.  See you in 2016!

A very Merry Christmas and Happy Holidays to readers of TV Banter's Y&R Report.  All the best in 2016.