You wanted to know . . . the latest on Kristy McNichol 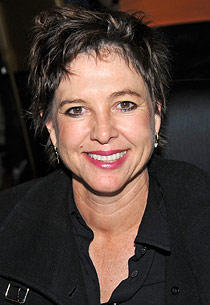 What's Kristy McNichol of such TV shows as Family and Empty Nest up to these days?  Thanks.

Although I've written about Kristy McNichol and her brother, Jimmy, a few times before, there seems to be a great deal of interest in the siblings.  Kristy, who turned 55 on September 11th, has been out of the spotlight for quite a while now, but there is still much curiosity about her.  This may be explained by the fact that she walked away from a successful acting career at such a young age.  It's hard to believe that more decades have passed since Kristy starred in Family and Empty Nest.

During the 1970s, Kristy was a celebrated child star.  From 1974,to 1975, appeared in a regular in a TV series for the first time, as Patricia Apple in the short-lived drama Apple's Way.  Viewers watched her grow up on screen as she played the role of Letitia "Buddy" Lawrence, the youngest child on the popular ABC network drama Family.  Family aired from 1976 until 1980.  For her portrayal of  Buddy, she earned two Emmy Awards for Best Supporting Actress in a Dramatic Series (1977 and 1979).  In 1978, Kristy won acclaim for her performance in the television movie Summer of My German Soldier.

After Family finished its run, Kristy turned her attention to the big screen.  She starred in two 1980 feature films, co-starring with Tatum O'Neal and Matt Dillon  in Little Darlings and with Dennis Quaid and Mark Hamill in The Night the Lights went Out in Georgia.  She followed that up with the role of Polly in 1981's Only When I Laugh.

In 1982, Kristy McNichol suffered an emotional breakdown during the filming of Just the Way You Are.  The film, released in 1984, is comedy-drama, featuring Kristy as Susan Berlanger, a disabled Boston flautist.  The actress later attributed her breakdown to the pressures of her childhood career.

In 1986, Kristy appeared int the the television film Woman of Valor, about American nurses in a Japanese POW camp during World War II.  From 1988 until 1992, Kristy portrayed Barbara Weston in the NBC comedy Empty Nest, a spin-off of The Golden Girls.  She returned for the final episode of the show in 1995, which would turn out to be her last on-screen performance.

In June of 2001, more than 16 years ago, Kristy McNichol announced that she had retired from acting.  She released the following statement through her publicist:

A lot of people have wondered what I've been up to. I retired from my career after 24 years. My feeling was that it was time to play my biggest part – myself! I must say that it has been the best thing that ever happened to me. So many fans are disappointed that I'm not currently acting; however, some may not realize that the process  I'm in at this time is necessary and vital for my personal happiness and well-being.

Kristy was 39 years old when she announced her retirement.  For years, she had struggled with bouts of severe depression.  This had affected her personality and caused her to be erratic and difficult to work with,  She was eventually diagnosed with bipolar disorder and her mental health issues led her to walk away from acting.  She seems to to have found the peace of mind sand well-being he sought.
After her retirement, she became an acting instructor at a private school in Los Angeles.  She also devoted herself to charity work.

In 2012, Kristy publicly revealed that she is gay (She lives with her Martie Allen, her partner of more than 20 years).  She stated that she was "approaching 50" and wanted to "be open about who I am."  Her publicist said she hoped her revelation would help young people who are being bullied.

There were other reason Kristy McNichol left show business besides her mental health. According to a 2014 article in TV Guide by Robyn Ross, Kristy opened up to People Magazine during a Love Boat reunion.  She told People that she left in part because "she wanted to see what else was out there."

I left show business for a variety of reasons, but a big one was my interest in learning what else there is in life ... This phase of my life is so good. My home life is happy and serene. I love singing. I also enjoy traveling and seeing the world. One of my favorite stops is Hawaii. I like everything about it and may eventually move there part-time.

Kristy doesn't sound as if she has any regrets about her decision to retire.  In 2015, she granted a rare interview to Liz McNeil  for People magazine and spoke enthusiastically about singing in the Los Angeles Valley Community College choir.  About six years ago, she enrolled in the college's Music program.

She told People how important her private life is to her.  She said "stepped away from Hollywood to find myself."  "It was a decision I had to make alone," she remarked. "And what I have found for myself is unbelievable.  There are all sorts of life experiences for me to explore, and music is one of my passions."