Growing Pains, an American situation comedy, ran from 1985 to 1992 on the ABC network.  The show centred on the affluent Seaver family.  The series featured Alan Thicke as Dr. Jason Seaver.  Seaver, a psychiatrist, who moved his office into the family home after his wife, Maggie, returned to work.  Joanna Kearns played Maggie, a newspaper journalist who later became a television reporter.  Their children were Mike (Kirk Cameron), Carol (Tracey Gold) and Ben (Jeremy Miller).  A fourth child, Chrissy, was born in 1988.  From 1988 until 1990, Chrissy was played by Kristen and Kelsey Dohring.  Ashley Johnson took over the role in 1990.

Why not test your knowledge of Growing Pains by answering the quiz below.  Good luck!

1.  Where did the Seaver family live?

2.  What was the name of the theme song from Growing Pains?

3.  What was Maggie Seaver's maiden name?

4.  What was Mike Seaver's middle name?

5.  What was the nickname of Mike Seaver's best friend? 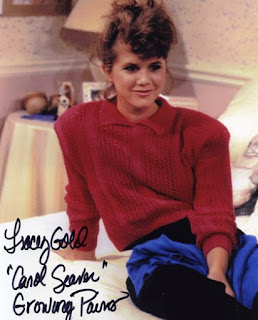 7.  Which of the following actors did not appear on Growing Pains?

B.  lost control of his motorcycle

C.  died in an airplane crash

E.  was killed in a drunk driving accident

A.  a cousin  of the Seavers

B.  a cheerleader who liked Mike

D.  an old friend of Maggie's

10.  In Season 7, why did Carol want to come home from college so often?

A.  She was homesick.

B.  The dorm was noisy and she couldn't concentrate on her studies.

C.  Her roommate's behaviour was causing difficulties for her.

D.  The students in her dorm were snobby.

E.  She didn't like the food in the cafeteria.  She felt ill after eating there.

13.  In a 1985 episode of Growing Pains, Jason embarrassed Mike at a concert.  Who was performing the concert?

14.  In the episode "Charity Begins at Home"  (Season 1, Episode 17, Air Date: February 18, 1986), Ben gave Jason a very expensive birthday present, causing speculation as to how he could have afforded it.  What was the gift?


A.  season's tickets for the New York Yankees

15. The late Dana Plato of Diff'rent Strokes fame, appeared in a 1985 episode of Growing Pains.  What part did she play?

A.  a Madonna look-alike

D. a wealthy classmate of Mike's

16.  In the final season of the series, when Tracey gold suffered from anorexia and had to take a leave of absence, how was her character, Carol written out of the show?

A.  Carol was taking a break from her studies to travel around the world.

B.  Carol and a friend were working in California for six months.

The theme song from Growing Pains was "As Long as We've Got Each Other."  It was written and composed by John Bettis (lyrics) and Steve Dorff (music).


Mike's best friend was Richard Milhous "Boner" Stabone.  Andrew Koenig played the role of Boner for four seasons, from 1985 until 1989.  In a February 1, 1989 episode entitled "Semper Fidelis," Boner decided to drop out of college to join the Marines.

Andrew Koenig, the son of Walter Walter Koenig (Chekov on Star Trek), took his own life in February of 2010.  He was 41 years old and his body was found in Stanley Park in Vancouver, British Columbia, Canada.

Tracey Gold suffered from anorexia. Her illness forced producers to write her out of a large amount of the show's final season.  Tracey told the Los Angeles Times that the last season was like a blur to her and that she can't even recall the episodes.  "They said, 'We've been canceled.  You can come back for the last episode,' but I was still very, very sick and an insurance risk."

Brad Pitt appeared in two separate episodes of Growing Pains, the first time in a 1987 episode, "Who's Zoomin' Who" (Season 3, Episode 9, Air Date November 10, 1987), in which Carol had a crush on him.  He appeared on the show for a second time in 1989 episode entitled "Feet of Clay" (Season 4, Episode 14, Air Date. February 8, 1989) when he portrayed musician Jonathan Keith, Ben's favourite rock star.  Maggie arranged a meeting between the true, but Keith turned out to be a disappointment.

In the show's fourth season in 1989, Matthew Perry, of Friends fame, played Sandy.  Sandy was a personable college student with whom Carol was smitten.


In the seventh and final season of the show., Leonardo DiCaprio joined the cast as a homeless teen named Luke Brower.  Luke was taken into the Seaver home.

Sandy died after being injured in a car accident while driving under the influence of alcohol.  He was taken to hospital and was apparently on the road to recovery.  However, two scenes later,, the Seavers learned that he had passed away due to internal injuries.

In the episode entitled "Long Day's Journey Into Night" (Season 2, Episode 3, Air Date: October 28, 1986), Annie,(Kate Boyer,) was a cheerleader who befriended Carol in order to get to know Mike better.

Carol wanted to come home from college so often because of the behaviour of her roommate, Brianne.  Brianne was always bringing boys into the room, who left it untidy.  She also allowed them to sleep in Carol's bed, leaving Carol with no place to sleep.

Annette Funicello, star of the original Mickey Mouse Club in the 1950s and several "Beach Party" movies of the 1960s, played the role of PTA President Mrs. Hinkley in the 1986 episode.

Fred was Maggie's co-worker with home she was working late at the office.

Ben gifted Jason with a fancy camera.  He obtained the money by asking the neighbours for money for the needy.

Carol was in London, England, pursuing her college education abroad.

* Canadian-born Alan Thicke died on December 13, 2016. of aortic dissection (a serious condition in which the large blood vessel branching off the heart rips apart) while playing hockey with his son Carter.  He was 69 years old at the time of his passing.

* Kirk Cameron (born October 12, 1970) married actress Chelsea Noble on July 21, 1991.  They have six children and Kirk is active as an Evangelical Christian.

* Jeremy Miller (born October 21, 1976) is married to Joanie Miller and has three stepsons.

* 166 episodes of Growing Pains were produced.