TV Banter presents a guest column today on TV advertising  Although I am not a fan of television commercials (I find the sheer number of them annoying and distracting), there is another perspective.  Here is a look at TV ads from the point of view of marketers and advertisers. 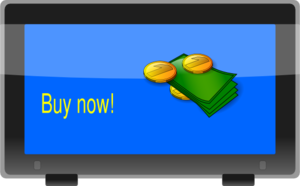 Having faced stiff competition from Netflix and various digital providers, the television industry has experienced seismic transition over the last few years. One thing that has not changed, despite the transitions, is that television still runs the world of advertisement. Television and the web work even better when combined. For this reason, advertisers are beginning to use integrated marketing strategies to connect with clients on each type of screen, from a 50-inch flat screen TV to the smartphone. Integrating television and print advertising plays a vital role in reinforcing the advertiser’s ad and maximizing its impact.

A recent report by eMarketer indicates that almost 70 per cent of Americans use smartphones while watching TV. Television serves as a powerful tool that helps to catch the attention of consumers when introducing a new brand or product in the market. This is because a large segment  of the audience uses either a second or third screen, such as a mobile device or a nearby laptop when watching. They might as well search for the TV ad they've seen for a product that is relevant to them.

In addition, TV can bring a direct positive effect on the user engagement either via social or search campaigns. The collaboration of television ads and digital campaigns plays a vital role in boosting online conversion and assisting advertisers in tracking their TV commercial performance.

Cable television has generated a wide range of channels that target a number of specific audiences. An extended TV ad should not run while major programs are running. These ads, instead, can be placed and timed to address a smaller set of the targeted audience. Targeting of video ads is the primary reason many advertisers choose the web as an alternative platform. The local digital publication can air ads that are targeted to local clients, as the niche sites run lucrative ad campaigns that benefit from intense viewer interaction on these websites. Once you combine a broad reach of television with the targeted scope of sites, you will have an effective marketing strategy.

A survey done by Deloitte in 2016 revealed that 10 per cent of respondents went to look for the items online after seeing them on a television sponsorship advertisement. For younger TV enthusiasts, the trend was more pronounced as 24 per cent of the audience of age between 16 and 24 went to look for the items they had seen on television. On top of that, television programs and ads were among the top three reasons why people considered making impulse purchases.

TV ads still have a significant impact on the public since they attract a considerable number of viewers who watch for at least four hours a day. Although the online world has been mainstream for more than ten years, the majority of people spend some time on social media platforms as well. Marketers have found out that cross-pollinating the online world and TV might help them generate more effective ad campaign. Therefore, whether you intend to advertise your site or you need to increase ad income on your website, make sure you use television advertising to conduct an effective campaign.

TV ads demonstrate how the product is used

Even though text and immobile graphics might be combined to create a powerful and memorable ad, nothing surpasses television when it comes to demonstrating an item’s usage. Additionally, viewer’s engagement is better when they see someone describing how a product is used. The proliferation of “how to” ads demonstrated on TV is proof that the majority of people want to watch how things are done. Demonstration helps the advertisers to take advantage of the curiosity of viewers when ads show items being used.

This is one of the most vital aspects of marketing. Marketers want to make sure that once they invest in a TV campaign, they are going to receive an income. Various studies have been carried out in the United Kingdom about return on investment to serve as evidence that TV advertising is more effective than other forms of advertising. The majority of marketers will, as a result, never consider reducing their TV ads since they understand the importance of TV as a marketing channel.

A superior experience is created for clients when multiple forms of advertising are well integrated with each other to help sway a purchase. However, the challenge that advertisers face while using TV ads is trying to track and measure various engagement activities with potential clients. Tracking the key performance indicators after a consumer watches a TV commercial is now easier since the advertiser has a variety of tools to help manage macro and micro conversions.

Abby Drexler is a contributing writer and media specialist for 007 Media Group. She often produces content for a variety of media and advertising blogs
.
Posted by Joanne at 10:03 AM