When Colour TV was a Big Deal 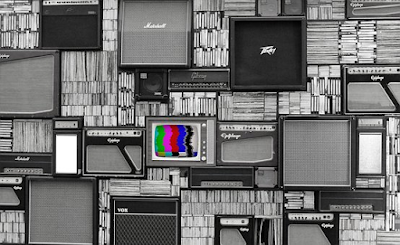 Yes, Virginia, there was a time when colour television was a very big deal. It was new, special and exciting.  If your relatives happened to own a colour TV, you would look forward to watching your favourite show in colour whenever you visited their home.  Hotels and motels had signs advertising the fact that they provided colour television for guests. 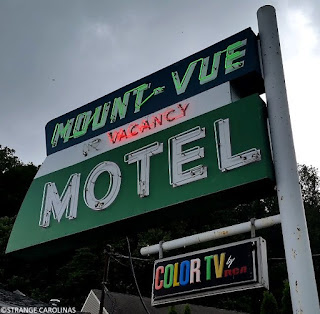 After World War II had ended, television engineers and executives returned quickly to a task that had begun well before the war.  Their goal was to broadcast television signals in colour.  By 1950, two companies were competing furiously to be the first to create colour TVs. They were the Columbia Broadcasting System (CBS) and RCA. CBS researchers, led by engineer Peter Goldmark, created a mechanical colour television system based on the 1928 designs of Scottish engineer John Logie Baird (1888-1946).  On October 11,1950, the U.S. Federal Communications Commission (FCC) endorsed CBS's colour television technology as the national standard. It approved the CBS Field Sequential System, which was authorized for broadcast after November 20, 1950.  The RCA system was not approved due to low picture quality.

On October 17, 1950, RCA,filed a suit in the Federal District Court in Chicago to halt color television broadcasting by CBS.  On May 28, 1951, the U.S. Supreme Court upheld the FCC ruling, approving the CBS system.  However, RCA had succeeded in delaying the launch of the CBS system for seven additional months.  During that time, more black and white sets were sold that could not receive the CBS signals.

Premiere was was hosted by Patty Painter, a former Powers model who was known as CBS's "Miss Color Television."  Painter, whose real name was Patricia Stinnette, was described in the New Yorker (August 11, 1951) as a woman who had "sat or stood in front of CBS experimental color cameras holding up scarves, apples and other colorful objects so that technicians and engineers can observe how the tints reproduce on the screen."  She had to wear "violent colors" and her ashbond hair "was "tinted a different color sometimes as often as three times a week." 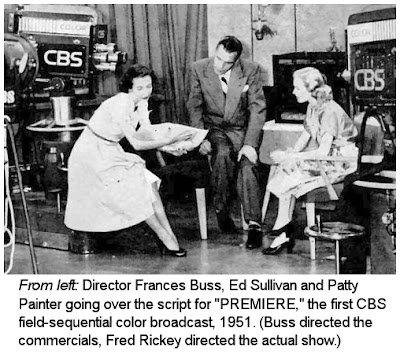 In New York, former U.S. First Lady Eleanor Roosevelt and American businessman Baruch were among those who watched Premiere on colour receivers at CBS headquarters.  Unfortunately for CBS, very few viewers were able to watch the history-making broadcast in the comfort of their homes.  Most Americans owned black and white sets and only people in certain U.S. cities were able to watch the show.   Premiere was carried in New York by WCBS-TV as well as by CBS affiliates in Boston, Philadelphia, Baltimore and Washington D.C.

In 1951, there were already millions of black and white TV sets (half of them RCA) and few color sets.  When colour television production was discontinued during the Korean War (1950-1953), CBS faced further setbacks and challenges.  These factors contributed to the failure of the CBS system to win acceptance.  RCA had time to fill the void and was able to produce colour television based on Alfred Schroeder's 1947 patent application for a technology called shadow mask CRT.

In late 1953, the FCC approved the RCA compatible system, an analogue colour television.  This system, commonly known as the National Television System Committee (NTSC), was used from 1954 until it was replaced by digital conversion.  The first colour television sets for this system went on sale to the public in March of 1954 and they featured a 15-inch screen. (On March 15, 1954, Westinghouse offered a colour TV for the sale price of $1,295, the equivalent of almost $12,000 in 2018 dollars.  On March 25, 1954, mass production of the RCA Victor model CT-100 began.  It was marketed as "The Merrill" and it cost $1,000.)

In his article for wired.com ("March 25, 1954, RCA TV Get the Color for Money"), Randy Alfred describes RCA's CT-100 as "the first color-TV set for consumers."  It offered low quality at a high price and was "destined to become a costly classic."

Colour television was such a hot topic in 1954 that it was mentioned in an  episode of I Love Lucy entitled "The Charm School" (Season 3, Episode 15. Air Date: January 25, 1954).  In the episode, Ricky Ricardo. his friend and landlord Fred Mertz and a guest named Bill Hall (Tyler McVey) have a discussion about whether whether colour TV will catch on.  Here is the dialogue:

RICKY: Do you think colour will take?

BILL: Colour?  Some people think that's it's, uh, just around the corner.  Others feel it's going to be a year or two.

Below is a photo of Bill, Ricky and Fred (Lto R) conversing at the Ricardo's apartment. 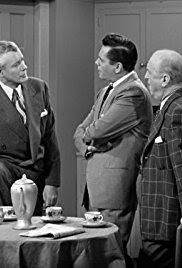 In 1956, Perry Como's program and Dinah Shore's program were broadcast in colour.  An ad promoting the two singers' shows blared, "Here they come on NBC in a blaze of Color! . . . and it's like meting them for the first time."

Below is a Perry Como colour TV ad. 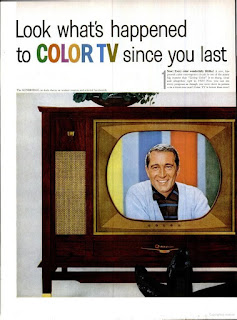 When colour television was first introduced, TV sets were regarded as important pieces of furniture.  Colour sets were too expensive for many people to afford.  As a result, the market for colour was limited.  During the 1950s, only small  number of scheduled programming and some specials were broadcast in colour.  Yet, once colour sets became more affordable, the audience increased.  The RCA standard with its compatibility with existing black and white sets was more marketable.  Few people wanted one box for black and white and another for colour in their living rooms.

By 1955, colour sets with 21-inch picture tubes were available. During the early 1960s, popular television series such as Bonanza, Walt Disney's Wonderful World of Color, The Flintstones, The Jetsons and The Ed Sullivan Show were aired in colour.  It wasn't until 1965, however,  that the majority of American commercial networks broadcast their prime time shows in colour.

In 1966, NBC announced that all of its new programming would be in colour. The other networks followed suit, and  by the end of that year, all prime time network shows were aired in colour.  However, most daytime, local and educational programming remained in black and white for a few years longer.  By 1972, sales of colour TVs in the United States finally surpassed those of  black and white.  By the mid-1970s, black and white broadcasts were a thing of the past.

* An episode of Dragnet that aired in December of 1953 was the first commercial television program on colour film.

* The first national colour broadcast in the United States was a live telecast of the Rose Bowl Parade, on January 1, 1954.

* The first colour broadcast of a U.S. president occurred in June of 1955: President Dwight D. Eisenhower.

* The first cartoons broadcast in colour were The Flintstones and The Jetsons in the fall of 1962.

* On August 11, 1951, CBS broadcast the first baseball game in color.  The game, between the Booklyn Dodger and the Boston Bravss, took place at Ebbets Field in Brooklyn, New York.  Red Barber and Connie Desmond delivered the play-by-play commentary.

*  From 1969 to the early 1970s, CBS's Field Sequential colour television technology was used to broadcast the Apollo moon missions.

If any readers have stories about the earlier days of colour TV, please write me about them and I will publish them.  I would  also like to hear from millennials.  What was your reaction when you first viewed a black and white TV show, if you've ever seen one at all?