This is not the best of times for many Y&R fans.  Frankly, the show's treatment of its longest serving cast member is contemptible.  I'm referring to Doug Davidson, who has portrayed Paul Williams on the show for 40 years.  Doug was unceremoniously dumped.  I won't use the word "let go."  He was cruelly "dumped."  According to the actor, his contract was not renewed in January and he went on recurring status until they had new people in place.

Doug maintains that he received "no information and no communication" from the CBS network.  In addressing his exit from the show, he tweeted, "They are doing away with history."  He also wrote that the plan was to diminish his role and that "they have a new direction."  It's obvious that police detective Rae Rosales, who recently arrived in Genoa City, is replacing the Paul Williams character.

It seems to me that the soap is trying to attract younger viewers, especially millennials.  In doing so, it has done away with a beloved character and integral part of the show's history.  The history of the show matters to many loyal and longtime viewers.  Changes could have been made without throwing Doug Davidson under the bus.  This is a man who has earned five Daytime Emmy nominations with a win in 2003 for Outstanding Lead Actor in a Drama Series.  His contribution to the success of The Young and the Restless should not be treated with such a lack of respect.

I've seen Doug Davidson a few times at Y&R events and he has a great sense of humour.  By all accounts he is a great guy,  I know it's a cutthroat business.  However, Doug Davidson deserves much better after devoting four decades of his life to the show.  I urge fans to email CBS and protest the firing of Doug.

Why have the writers turned Nicholas Newman into a younger version of his father?  I liked Nick much better when he marched to the beat of his own drummer.  He's a completely different person now.  He's ego-driven and ruthless.  He's also completely oblivious to Sharon's feelings. She doesn't want to move from her home.  She is very happy with her cottage, even though it is on the Newman ranch.  The new insensitive Nick has no clue how much the place means to her.

It now appears that Jack Abbott's biological father is Albert Miller, father of Victor Newman.  If that turns out to be true, then Victor is Jack's half-brother and Kyle's uncle.  Will it tun out to be true, though, or is it just another dead end?  Jack and Victor as brothers would create a great deal of conflict and intrigue.  For both characters, it would be a nightmare.  So, there is a good chance Albert Miller is the daddy.  Still, hold on to your hats.  There may be more twists and turns in this storyline.  If Albert and Jack do not share the same DNA, then who fathered Jack?  There is the possibility that Jack will turn out to be John Abbott's biological son after all.

There is no doubt that Billy Boy Abbot is being consumed by his gambling addiction.  He is going to crash and fall.  So, who will take over as CEO of Jabot?  If it's Jack or Ashley, the "blood Abbott" clause will have to be revoked, unless Jack actually turns out to be John Abbott's biological son.

Phyllis and Billy are headed for a breakup and Phyllis may go after Nick again.  Sharon and Nick have too many secrets and I don't think they will last.  Also, Sharon is not too thrilled about the way Nick has become so much like his father.  I think she may end up with Rae.  Phyllis, on the other hand, relishes the change in Nick.  She likes his ambition and his aggressiveness. 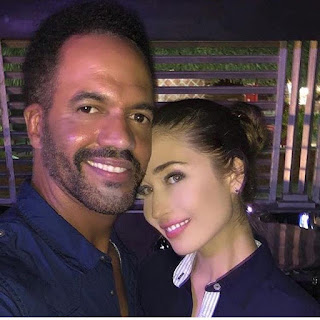 Kristoff St. John, who plays the patriarch of the Winters clan, has announced on Instagram that he is engaged to Russian model Kseniya Mihaleva.

Kristoff took a leave of absence from the show last year due to mental health issues stemming from  suicide of his son, Julian, in 2014.  After receiving psychiatric treatment, he returned to the show.  After all he's been through. it's about time he enjoyed some happiness.

Christel Khalil (Lily Ashby) recently went off contract and has switched to recurring status.  That means she'll be able to spend a lot more time in Canada, where her boyfriend, businessman Sam Restagno is based.  The couple began dating in July of 2016, according to the Soap Opera News website.

In an interview with TV Insider, Y&R's head writer and executive producer, Mal Young, stated that Chelsea Newman (Melissa Claire Egan) will be back in Genoa City at some time in the future.  At present, Chelsea is  a fugitive.  She is on the run with her son Connor, whose father is Adam Newman.

Chelsea's return makes sense.  That storyline is hanging there like a bundle of loose ends.  I wonder what her reaction will be when she sees what has happened during her absence.  She won't be too happy about Nick and Sharon's engagement.  Maybe she'll some to town in time to spoil their wedding.  As for Connor, will they age him about ten years?

Sasha Calle has joined the Y&R cast as Lola Rosales, sister of Rae and Arturo.  She is quite interested in Kyle Abbott, who seems to have had enough of the Snowflake.  Suddenly, however, Summer seems to want Kyle back.  Now she has some competition from a woman who cooks up some meann Cuban food.  This should be fun.

Readers, what do you think of Lola?  Are you impressed?  Respond to the poll below and let me know.


Are you impressed with Lola?
Created with Quiz Creator


That's all for now.  Don't forget that the next edition of Y&R Report will appear in this space on Saturday, September 29, 2018.