Nick and Sharon's wedding turned into a major fiasco.  When Sharon failed to arrive at the church on time, friends and family were uncertain whether she would even show up at all.  However, she finally arrived and apologized for her tardiness.  It seemed as if the marriage would actually happen.  The bride and groom exchanged their own vows, but then Sharon dropped a huge bomb on the proceedings.  She angrily tore up the paper on which her vows were written and publicly humiliated Nick.  She told him that she couldn't marry him and then revealed that he cheated on her with Phyllis. The bridal party and the guests were aghast.  Billy, who had just proposed to Phyllis, freaked out.  He and Nick almost came to blows in the sanctity of the church.

So, are Nick and Sharon finished for good?  Well, I think they are done for the foreseeable future, but I wouldn't rule out the possibility that they could get back together again sometime down the road.  After all, how many times have Nikki and Victor broken up and gotten back together?  In the meantime, though, it looks as if Sharon will hook up with Rae and Phyllis and Nick will get together again.  Rae has moved into an apartment in the coffee shop and he's going to be seeing a lot of Sharon.

Although Rae is smitten with Sharon, he is trying to be subtle.  That's why he announced that Lola would be cooking dinner for them and he emphasized that it was not a date.  Nevertheless, Lola quickly picked up on Rae's crush on Sharon.  She reminded her big brother that although Sharon is single, he is still married.  At some point, Rae's wife will probably show up in Genoa City.  At any rate, viewers will eventually learn what happened between them.

Billy Boy and Phyllis have broken up on in bitter fashion.  Billy kicked her out of the Abbott house.  Then, without missing a beat, he called up Summer and had a tryst with her. (I must say, it certainly didn't take him much time to hook up with Summer).  Our favourite Snowflake is in for a rude awakening, though.  She actually thinks Billy is her new boyfriend, but I think he'll just cast her aside.  He was angry with Phyllis and he just used Summer as revenge.  Just wait until her mother finds out about it.  Phyllis will blow a gasket.

Summer is unhappy about Kyle's relationship with Lola.  She's obviously jealous that he is paying attention to someone else.  Watch out, Lola, because Snowflake is going to use every trick in the book to undermine your romance with Kyle.  She is her mother's daughter and she will be ruthless, especially when she discovers that Billy is not interested in a future with her.

Lola is no shrinking violet, but there is a sharp contrast between her and Summer.  Snowflake is blond, rich and spoiled.  She feels entitled and has enjoyed all the advantages and privileges of being a Newman.  Lola, on the other hand, is hard-working and unpretentious.  Kyle will have to choose between two different women.

I'm pleased that Jack Abbott is John Abbott's biological son after all.  I would not have wanted him to be related by blood to Victor Newman.  Yet, I fond it difficult to believe that Ashley would be so vengeful and devious.  She has never shown herself to be so cold-hearted.  The writers changed her character and her behavior has not rung true.  Eileen Davidson, who played Ashley so well for so many years, has left the show and her character deserved a better send-off.  Why couldn't the writers have sent Ashley to Paris or London. leaving the door for Eileen to make appearances once in a while?

According to an online spoiler, Lily is going to try and escape from prison. 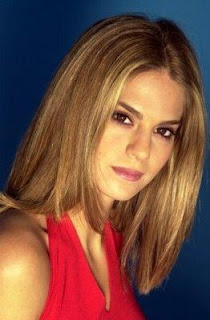 Yes fans, Mac is coming back.  She hasn't been in Genoa City since June and she should stir things up.  She'll be trying to solve the J.T. mystery and her involvement will make the Victoria, NIkki, Phyllis and Sharon squirm.  She'll certainly provide Rae with a lot of information.

Someone has been sending threatening letters to Victoria, Nikki, Sharon and Phyllis, the four women involved in J.T. Hellstrom's death and burial.  Who could it be?  The messages are short and cryptic.  They have shaken up the quartet, as they were intended to do.  However, the women cannot show that they are rattled.  As far as viewers know, nobody knows their secret.  So, it seems that someone suspects them of involvement in J.T.'s disappearance and is trying to get them to let down their guard.  Detective Rae appears to be the most logical suspect.  He's determined to solve the J.T. mystery and has commented that there has been no sign of J.T. since the girl's night party.  However, Rae seems too obvious.  It may be more complicated than that.

The messages have not mentioned J.T.'s name, but most viewers assume they have to do with him.  Why else would the four women involved in his death be targeted?  Still, the writers may be trying to fool us.  Who knows?  What do you think?  Respond to the poll below and let me know.


Who has been sending threatening letters to Victoria, Nikki, Phyllis and Sharon?
Created with PollMaker

That's all for now.  Please remember that the next edition of Y&R Report will appear in this space on October 27, 2018.