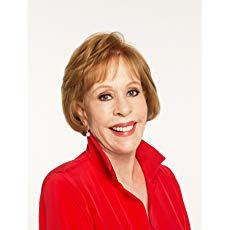 "My first love growing up was the movies . . . and later, when I was a teenager, we got our first television set, and then I got a new love.  But what fascinated me was how the stars on the screen could make people laugh, or cry, or maybe both . . . I catch myself daydreaming about being young again and doing it all over, and then I bring myself up short when I realize how incredibly fortunate I was to be there at the right time.  Because what we did then, it couldn't be done today."

Carol Burnett is 85 years old.  She is one classy woman and an extraordinary comedian.  Her career spans seven decades of television.  Last evening she received the inaugural Golden Globes prize for lifetime TV achievement.  Not only was she the first recipient of the award, but it was named in her honour.  Henceforth, it will be known as the Carol Burnett Award.  It will be presented to a person who has made an outstanding contribution to television, on or off the screen.

Carol's acceptance speech was full of gratitude for her good fortune. It was very moving, very gracious and somewhat wistful.  Her variety show, The Carol Burnett Show, first aired on September 11, 1967 (over 51 years ago) and it ended in 1979.  Carol was a pioneer because she was the first woman to host a variety sketch show on American television.  In her speech, Burnett said that her show ran for "11 joy-filled years."  She stressed, however, that it couldn't be done now because the "cost alone would be prohibitive."  Other popular variety shows at the time, she added, "could never see the light of day today because the networks just wouldn't spend the money."  "Sad to say today's audiences might never know what they are missing," she declared.

Times and have changed radically. Variety shows haven't been in vogue for years and network television is in decline due to the Internet and streaming.  There are so many television shows that no one can begin to watch them all, or keep track of them.  Millennials generally prefer to watch what they want, when they want and how they want.  Long gone are the days when families sat around the television together and watched Ed Sullivan and All in the Family.  Many young people regard that as the ancient past.  However, for baby boomers, they evoke fond memories.

Dick Van Dyke was also on hand at the Golden Globes, where he was given a standing ovation.  The 93-year-old as starred in two major television series:  The Dick Van Dyke Show (1961-1966) and Diagnosis Murder (1993-2001).  Dick is a very active nonagenarian.and he has a cameo role in Mary Poppins Returns (He played Bert the Chimney Sweep in the original 1964 Disney film alongside Julie Andrews).

Van Dyke is a master of physical comedy.  He is tall, lanky and very versatile.  He can sing, dance and tell jokes.  He's extremely talented.  I recently saw a documentary in which Dick comments about an entertainer who had a great influence on him.  The documentary, entitled The Great Buster, explores the life and achievements of another great physical comedian, - Buster Keaton.  Van Dyke is a great admirer of Keaton's talents as well as those of  other silent film era comedians such as Charlie Chaplin and Laurel and Hardy.  In fact, when Stan Laurel died in 1965, Dick Van Dyke delivered the eulogy at his funeral.

So, here's to Carol and Dick.  Thanks for for all the joy and laughter you have brought  to people.  We'll never see your like again.  However, as Carol pointed out in her Golden Globe speech, we can still watch them on reruns and YouTube. 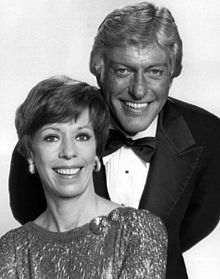