The Murder of Bob Crane of "Hogan's Heroes" 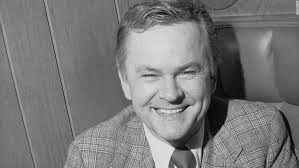 Robert Edward "Bob" Crane was born on July 13, 1928 in Waterbury, Connecticut, the son of Alfred Thomas Crane and Rose Mary Crane.  He had an older brother, Alfred John Crane (1926 - 1994).  Bob spent his childhood in Stamford, Connecticut, where he learned to play the drums at an early age (He was inspired to play by Gene Krupa at the 1939 World's Fair in New York City).  After graduating from Stamford High School in 1946, Bob became a drummer with The Connecticut Symphony Orchestra for about a year.  In 1948, he enlisted in the Connecticut Army National Guard.  He served for two years and was honourably discharged in 1950.

In 1949, Bob Crane married his high school sweetheart, Anne Terzian.  The couple had three children: Robert David, Deborah Anne and Karen Leslie.  In 1950, Bob got his start in radio with WLEA in New York, after which he went to WBIS in Bristol, Connecticut and WLIZ/WICC in Bridgeport, Connecticut.

In 1956, Bob and his family moved to Los Angeles, where he hosted the popular CBS radio morning show on KNX, the network's Los Angeles flagship station.  Bob's show had the highest ratings among listeners in the L.A. area and he interviewed stars such as Marilyn Monroe, Bob Hope and Charlton Heston, Jack Lemmon, Jayne Mansfield, Jerry Lewis and Jonathan Winters.  He remained at KNX until August, 1965, when he left to focus on Hogan's Heroes.

In the early 1960s, Bob Crane launched a television career.  He guest-hosted for Johnny Carson on the daytime game show Who Do You Trust?.  He also made an uncredited appearance as a disc jockey on The Twilight Zone (1961) and guest-starred on General Electric Theater (1961), Channing (1963) and Alfred Hitchcock Presents (1963).  When Carl Reiner, appeared on Bob's radio show, Crane persuaded Reiner to give him a role on an episode of The Dick Van Dyke Show (Reiner was the creator of the show).

Bob appeared in a 1962 episode of The Dick Van Dyke Show entitled "Somebody has to Play Cleopatra" (Season 2, Episode 14, Air Date: December 26, 1962.  In the episode, Rob Petrie (Dick Van Dyke) is assigned the task of casting the lead roles in the annual variety show sponsored by his neighbours.  As he tries to cast the perfect "Cleopatra" to go along with "Mark Antony" he is forced to deal with spousal jealousy.  Crane played a philanderer Harry Rogers, a seemingly amorous Mark Antony.

Below is a photo of Bob Crane and Mary Tyler Moore on the Dick Van Dyke Show in 1962. 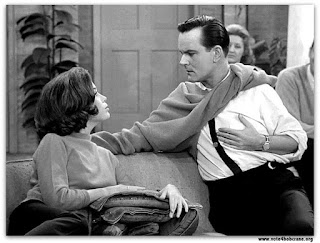 After Bob's performance on The Dick Van Dyke Show, he was cast in a regular role on The Donna Reed Show as Dr. David Kelsey, a dentist and next-door-neighbour of Donna's television family, the Stones.  Donna had been a guest on Bob's KNX-CBS radio show and was impressed with him.  She invited him to appear on an episode on her show.

In "The Two Doctors" Bob first episode on The Donna Reed Show, he portrayed Dr. Dave Blevins,  a medical friend and colleague of Donna's TV husband, Dr. Alex Stone (Carl Betz).  Bob's appearance in "The Two Doctors" (Season 5, Episode 26, Air Date: March 14, 1963) made such a favourable impression on Donna and her producer/husband Tony Owen that he was offered the regular role of Dr. Kelsey, opposite Ann McCrea who played his wife. Midge.  The Kelseys are introduced in the episode ""Friends and Neighbous," which aired on April 4, 1963. 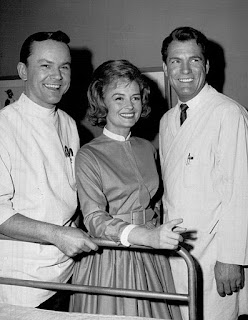 Below is photo of Bob Crane as Colonel Hogan, circa 1969. 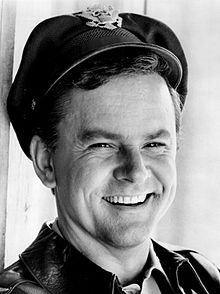 In 1969, Bob Crane and his wife, Anne, separated after 20 years of marriage.  Their divorce was finalized in 1970.  Soon after, Crane married for the second time, to Patricia Annette Olson, an actress whose stage name was Sigrid Valdis.  Valdis played "Hilda," Colonel Klink's secretary on the Hogan's Heroes.  Hilda and the womanizing Colonel Hogan flirted on screen and they also began an affair in real life.

On October 16, 1970, Bob and Patricia wed on the set of Hogan's Heroes..  The late Richard Dawson, who portrayed Corporal Peter Newkirk on the show, served as best man. (After Hogan's Heroes, Dawson went on to host Family Feud).  Bob and Patricia had a son, Scotty, who was born in 1971.  They also adopted a daughter, Ana Marie.

Below is a photo (circa 1969) of Bob Crane and Sigrid Valdis as Colonel Hogan and Fräulein Hilda on Hogan's Heroes. 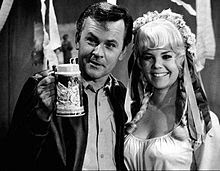 In 1975, however, Crane returned to television in the NBC series The Bob Crane Show.  He portrayed Bob Wilcox, a 40-something man who quits his job as an insurance salesman to return to medical school.  Patricia Harty played his wife, Ellie Wilcox.  The show, however, was short-lived.   After 14 episodes, it was cancelled due to poor ratings.

During the run of Hogan's Heroes, Richard Dawson introduced Bob Crane to John Henry Carpenter, a video equipment salesman from Sony.  Carpenter (born June 24, 1928) was of Native American and Spanish heritage.  He and Bob became friends and began frequenting bars together.  With the assistance of Carpenter and his technical knowledge, Bob descended into a dark world of video pornography and sex addiction.  He used his celebrity status to attract women and introduced Carpenter as his manager.  When Carpenter later became national sales manager for Akai, a Japanese consumer electronics brand, he arranged his business trips to align with Bob's dinner theatre performance schedule.

By the late 1970s, Bob Crane's career was on a downhill slide and his second marriage was in trouble.  He and Patricia had separated and she resented the influence that Carpenter had on him..  Bob was forced to rely on the dinner theatre circuit for work and he could only win guest spots on shows like Quincy, M.E. (1977), The Hardy Boys/ Nancy Drew Mysteries (1977) and The Love Boat (1978).  The Love Boat (Season 1, Episode 13, Air Date: January 7, 1978) was his final screen acting credit.

In June of 1978, Bob was starring in a play called Beginner's Luck at the Windmill Theatre in Scottsdale, Arizona, an affluent suburb of Phoenix.  He had purchased the rights to the romantic comedy and during the run of the play, he was staying at the Winfield Place Apartments in Scottsdale.

On the afternoon of June 29, 1978, Victoria Ann Berry, Bob's co-star in Beginner's Luck, entered his apartment when he failed to show up for a lunch appointment.  She discovered Bob's body and local police immediately summoned to Apartment 132A.  When they entered the apartment, they came across a grisly scene.  They found the battered and bludgeoned body of 49-year-old Bob Crane.  He was sprawled on the bed and there was an electrical cord knotted around his neck.

Suspicion fell on John Carpenter but DNA testing was unavailable in 1978.  Still, there was no sign of a forced entry to Crane's apartment, which suggested that the murder victim was familiar with his assailant.  Robbery was not a motive since nothing of value had been taken from the apartment.  Police found blood in Carpenter's rental car, a Chrysler Cordoba.  It was Bob's blood type and nobody who had handled that vehicle had the same blood type as Crane.  Without a murder weapon, however, the evidence police found in Carpenter's car was not considered enough to issue a warrant for Carpenter's arrest.

It wasn't until 1990 that Scottsdale Police Detective Barry Vassall and Maricopa County Attorney's Office investigator Jim Raines, re-examined the 1978 evidence and persuaded the county attorney to reopen the case.  Raines had discovered a crime scene photo that showed a speck of brain tissue in Carpenter's car.  The sample no longer existed, but the image was considered admissible by a judge.

In June of 1992, John Carpenter was arrested and charged with the murder of Bob Crane.  He went on trial in 1994, but the prosecution found it difficult to prove his guilt beyond a reasonable doubt.  DNA testing of the blood proved inconclusive.  Witnesses testified that Crane and Carpenter had had a friendly dinner the night before the murder.

At the trial, however, Bob's son, Robert Crane, told a different story about his father's relationship with John Henry Carpenter.  He stated that Carpenter had become "a hanger-on"  and "a nuisance to the point of being obnoxious."   Robert also testified that his father had contacted Carpenter the night before the murder and put an end to their friendship.

Carpenter's attorney dismissed speculation that a missing camera tripod could have been the murder weapon and pointed out that there was no proof of its existence.  The defence suggested that an angry husband or boyfriend of one of the women Bob had been involved with could have been the killer,

Detective Barry Vassall still believes that Carpenter was Bob Crane's killer.  He told Entertainment Weekly that he is doubtful that infidelity was a motive for the crime.  Vassall stated that "Bob was a non-confrontational guy, and those women liked him.  I don't think I ever interviewed one that disliked him."

Ultimately, there was not enough evidence to convict the accused and he was acquitted.  Carpenter maintained his innocence until his death in 1998, four years later.  Officially, the murder remains unsolved.  Detectove Vassall stated, "We did the best we could.  We went through all the evidence . . . A lot times when you have an old case like that, it's very difficult to get a conviction.  It would have been a slam dunk with the DNA testing."

In 2016, the Maricopa County Crown Attorney's Office allowed Phoenix television reporter John Hook to submit the DNA blood samples from Carpenter's car for more advanced DNA testing.  The samples were sent to the same firm that assisted with the high profile JonBenét and O.J. Simpson cases.  The testing only confirmed the presence of a previously unidentified male.  The rest of the results were inconclusive.  No further tests are possible because this testing consumed all the remained DNA from Carpenter's vehicle.

* Bob Crane's second wife, Patricia "Patti" (some sources spell it "Patty") Olson died of lung cancer on October 14, 2007.  She was 72 at the time of her passing.  After Crane's murder, she left the Los Angeles area.  In 1980, she moved to Seattle and later joined the cast of her son Scott's syndicated radio show, Shaken, Not Stirred.  In 2004, she returned to her childhood hometown of Westwood, Los Angeles, California..  She died at the home of her daughter, Ana Sarrmiento. in Anaheim, California.

Patricia's stepson, Robert Crane, tried to point a finger at her, speculating that she might have had a role in instigating her estranged husband's murder for financial gain.  Police have never taken his accusations seriously.

* On July 5, 1978, Bob Crane was given a funeral at St. Paul the Apostle Church in Westwood, California.  About 150 to 200 people attended, including celebrities such as Patty Duke, John Astin and Carroll O'Connor.

* There is a 2002 feature film about Bob Crane called Auto Focus.  It stars Greg Kinnear as Crane, Willem Dafoe as Carpenter and Maria Bellow as Patricia.Olson.  Scott Crane, Bob's son with Olson, challenged the accuracy of the film.