Keeping up with Ted McGinley (Roger Phillips on Happy Days)

"But the truth is, I can name actors who’ve had one show after another that just came and went like candy. My thing is that I’ve come on iconic, classic television shows, and… I mean, I worked seven and a half seasons on Married With Children, four on Happy Days, and probably three, three and a half on Love Boat. I didn’t just show up and then… I like to think I helped extend the life of the shows, and that I actually helped add to the show. And I don’t really appreciate being the one you can blame for it, because it’s actually not the case."

- Ted McGinley, 2012 interview with Will Harris for AV Club (avclub.com)

Ted McGinley is best known for his role as Roger Phillips on Happy Days from 1980 to 1984.  Ted was born Theodore Morton McGinley on May 30, 1958 in Newport Beach, California, U.S.A.  He is the son of Bob and Emily McGinley and he is of Irish descent.  Ted attended Newport Harbor High School, where he excelled in athletics such as swimming and water polo.  After graduating from high school, Ted attended the University of Southern California (USC), on a water polo scholarship, where her was captain of the water polo team and a member of the Sigma Chi fraternity.

During his sophomore year at college, Ted began modelling at the suggestion of a girlfriend.  In 1979, when his scholarship was not renewed, he left USC and headed for New York City.  As it turned out, a casting director, noticed a photo of Ted in GQ magazine,  The casting director. happened to be Joyce Selznick, the niece of  legendary Hollywood film producer David O. Selznick (Gone with the Wind).  Selznick, who had been hired by ABC-TV to search for talent, assured a doubting Ted that he would be given a screen test in New York in three months.  She said , "we're gonna put you on tape"  and she told him to "start studying."  Much to his surprised, an ABC crew actually arrived in New York three months later.  Ted underwent a screen test and signed a contract with the network.  ABC offered to pay for classes for the inexperienced McGinley, so that they could hold onto him for one year.  That's how he ended up with the role of Roger Phillips on Happy Days.

Ted didn't join the cast of Happy Days until the hit comedy's eighth season.  Ron Howard, who played Richie Cunningham, had left the show in order to pursue a directing career and a new character was needed to help fill the void left by Richie's departure.to join the army.

In a 2012 interview with Will Harris for AV Club, Ted explained why he was chosen to play Roger Phillips.  He said the following: "Well, they were looking for an all-American straight guy to play against the Fonz . . . 'straight guy meaning to help set up jokes."

Ted made his Happy Days debut as Roger Phillips in an episode entitled "Hello, Roger" (Season 8, Episode 4, Air Date: December 2, 1980).  In the episode Roger, Marion Cunningham's nephew, comes to Milwaukee to start a new life.  Clean-cut Roger finds work as a teacher and basketball coach at Jefferson High School in the city.

In his AV Club interview, Ted described his acting in his  Happy Days debut as "horrible."  He said it had to have been "taxing:" for Henry Winkler and the rest of the cast because "I didn't even know what comedy was, really, I didn't know the rhythms, the timing or any of that.  But that was a pretty good place to learn."

Below is a photo of Ted McGinley as coach Roger Phillips on Happy Days. 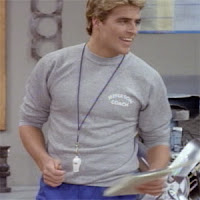 During the eighth and nineth seasons of Happy Days, Roger became a recuring character on Happy Days.  By Season 10, he was a major character and Ted McGinley remained with the show until its 11th and final season.

After Happy Days finished its run in 1984, Ted became a regular on The Love Boat,  playing Ashley "Ace" Covington Evans, the ship's photographer and later, a purser on the vessel.  The series ended its run in 1987.

From 1986 to 1987, Ted portrayed Clay Fallmont in 34 episodes of the primetime soap Dynasty.  Fallmont was a wealthy young businessman from a family of politicians.  His father was a senator.

In 1989, Ted began playing the role of Jefferson D'Arcy, the second husband of Marcy Rhoades (Amanda Bearse) on the Fox network's hit comedy Married . . .with Children.  Jefferson was lazy and self-centred.  He married Marcy for the economic benefits.

Below is a photo of Ted with Amanda Bearse in a scene from  Married . . .with Children.

From 1998 to 1999, Ted played Gordon Gage in eight episodes of  Sports Night, an Aaron Sorkin comedy/drama about sports anchors on a nightly cable TV program.

From 2001 to 2003, Ted portrayed Mark Gottfried in three episodes of another Aaron Sorkin series, the political drama, The West Wing.  From 2003 to 2006, he portrayed Charley Shanowski on the ABC sitcom Hope and Faith, alongside Kelly Ripa  and Faith Ford.

In 2013, Ted guest-starred as Mel in an episode of the popular drama Mad Men, about 1960s era advertising executives.  The episode is called "To Have and To Hod" {Season 6, Episode 4, Air Date: April 21, 2013).  In 2016, Ted appeared in four episodes of the short-lived TV comedy/drama No Tomorrow..  He portrayed Greg Covington on the show.

Ted McGinley has the dubious reputation of being a sitcom killer.  Critics say that when he joins the cast of a successful television series, he kills it.  He was called "the patron saint of shark-jumping" by American radio personality and jumpshark.com founder Jon Hein.  However, on his website, Hein denied hat he was commenting on Ted's "fine acting skills."  He wrote that Ted, "has a good sense of humor about it, too."  He went on to say, "Thankfully, Ted remains gainfully employed in the industry and keeps us in business.  Remember, it's just busines, never personal."

In a 2013 story in Maclean's magazine, Jaime Weinman refuted the argument that Ted is a jinx.  Weinman wrote the following: "The idea of Ted McGinley as the man who destroys TV shows has been over for a long time.  I don't even think the creator of "Jump the Shark" was even seriously suggesting that he was a jinx, since it didn't make any sense - Married . . .with Children did fine with him in it."  Weinman pointed out that most of the shows he'd joined had been on their last legs, that they "had been dying either in the ratings or artistically or both: Happy Days, The Love Boat, Dynasty."

For most of his career, Ted has joined the cast of series in mid-run, but there has been one major exception.  He starred on Hope and Faith from beginning to end.  He played the husband of Faith Ford;s character, who was called "Hope." 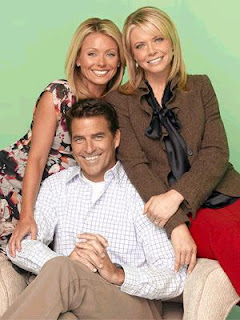 Ted McGinley has been able to joke about his reputation as a show killer and he doesn't seem to take himself too seriously,   In a 2003 interview with Melanie McFarland of the Seattle-Post Intelligencer, he said, "I've had a lot of fun with it.  To be honest with you, it's meant people are still talking about me.  It's kind of doing me a favour.  And people keep hiring me, so I know that I'm okay jumping the shark."  In 2004, however, Ted told Newsweek magazine that "Every time I'm on a show I'm supposed to kill it, but it took me 7-1/2 years to kill Married . . .with Children and 4-/2 years to kill Happy Days. It's my own fault.  I used to make the joke that I sank "The Love Boat." And now its grown into this monster."

Ted has been a professional actor for over forty years now.  Indeed, he has had a varied and successful career.  In more recent years, he has appeared on the TV CBS comedy/drama Mom (20220) and he has played the role of Webb in the 2021 TV mini-series Keeping Up with the Jones.

On June 21, 1991, Ted married actress Gigi Rice.  Ted met Gigi at Burt Reynolds's Maltz Jupiter Theatre in Florida, where they were both performing in a play.  In his interview with AV Club, Ted stated that he first became acquainted with Reynolds "up in Toronto when I did Physical Evidence, which was directed by that other genius, Michael Crichton."  It was then that Burt asked Ted to play at his theatre, where he met his future wife.

Ted and Gigi have two sons, Beau Martin McGinley (born May 25, 1994) and Quinn Thomas McGinley (born May 29,1997).  Beau is a graduate of the Washington University in St. Louis, where he earned a Bachelor of Arts degree in cellular biology.  Quinn attended Loyola High School in Los Angeles and has been an avid golfer.

END NOTES:
* In 2010, Brooke Shields told the New York Post that Ted McGinley escorted her to her senior prom at the Dwight-Englewood in Englewood, New Jersey in 1982.  They were dating at the time and Ted flew in from California to take her to the prom.* Ted's wife, Gigi Rice, was born in Columbus, Ohio on March 13, 1963.  She is a graduate of Oho State University and is known for her appearances in the 1998 feature film A Night at the Roxbury and her role as Carly Watkins on The John Larroquette Show from 1993 to 1996.  Ted appeared with her as three episodes of the Larroquette series from 1995 to 1996,   He played Karl Reese.
Gigi also made guest appearances on Will & Grace (2001) and on three episodes of Frasier (1999, 2,000, 2001).  In 2005 she portrayed Trudy in an episode Ted's series, Hope and Faith, entitled "The Halloween Party" (Season 3, Episode 6, Air Date: October 28, 2005). From 2007 to 2012, she had a recurring role as Marda Brooks in the war drama Army Wives.  In 2016, Gigi played Gloria Covington, alongside Ted in three episodes of No Tomorrow. She also guest-starred in a 2021 episode of the comedy United States of Al.
Ted and Gigi co-starred in 1996 NBC television movie called Deadly Web, a mystery/sci-fi drama in which Gigi played Terri Lawrence, a divorced mother who is terrorized by a Cybergod.  Ted portrayed Peter Lawrence.in the movie.  The couple also appeared in the 2004 TV movie MTSB: The Crash of Flight 323.
* In 2008, Ted was a contestant on Dancing with the Stars.  He was partnered with Inna Brayer, a Russian-born, American raised ballroom dancer.