James Darren and his television career 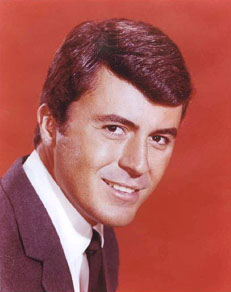 Regular readers of TV Banter know that I have been watching a DVD of the first season of The Donna Reed Show.  I discovered that James Darren appeared in an early instalment of the series entitled “April Fool”.  The episode aired on April 1, 1959 and Darren played Buzz Berry, the favourite rock ‘n roll singer of Mary Stone (Shelley Fabares).  In the episode, Buzz arrives in town for a concert.  He has contracted a bad case of the measles and is forced to hide out at the Stone family home for a few days to recuperate.  During the final scene at Mary's school, he dances with Shelley Fabares and sings to her.  (Note: Ted Knight of Mary Tyler Moore Show fame, had a very small role in this "April Fool" episode.  He portrayed a character named Phil Martin)
James Darren was born James William Ercolani in Philadelphia, Pennsylvania on June 8, 1936.  He began his show business career as a teen idol.  His biggest hit song. “Goodbye Cruel World” was #3 on the Billboard Hot 100 in 1961.  He played Gidget’s boyfriend, Jeff, also known as “Moondoggie”, in a string of Gidget movies.
As all you Flintstones fans must know, James Darren was the speaking and singing voice of “Jimmy Darrock” in a March 12, 1965 episode of the animated television series entitled “Surfin’ Fred”.  In the episode, the Flintstones and Rubbles visit Rock Island during a big surfing festival.  Jimmy Darrock, posing as a lifeguard, rescues Fred when his attempts to surf end in disaster.  Below is a photo of Jimmy Darrock on The Flintstones. 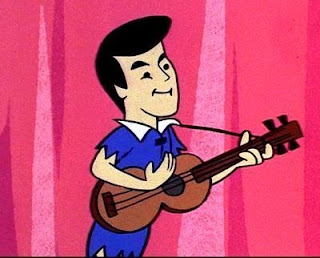 From 1966 to 1967, James Darren portrayed a scientist and time traveller, Dr. Tony Newman, in The Time Tunnel.  In the 1970s, Darren appeared as a guest panellist on Match Game.  In the 1980s, he portrayed Officer Jim Corrigan on the police series T.J. Hooker.
In 1998, James Darren renewed his popularity as a singer when he took on the role of holographic crooner Vic Fontaine in Star Trek: Deep Space Nine.  Many of his performances on the show were re-recorded for the 1999 album This One’s From the Heart.
James Darren is now 74 years old.  He has been married twice.  His first wife was Gloria Terlitsky whom he wed in 1955.  They had one son, Jim Moret, and divorced in 1959.  Moret worked as a CNN anchorman and is probably best known for hosting the cable news network’s coverage of the O.J. Simpson trial in 1995.   He is now chief correspondent for the syndicated news program Inside Editon.
Since February 6, 1960, James Darren has been married to Evy Norlund.  They have two sons, Christian Darren, a writer, and Tony Darren, a musician.
- Joanne
Posted by Joanne at 4:48 PM