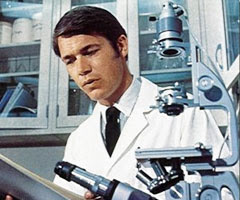 This has been a terrible month for former television stars.  Andy Griffith passed away on July 3rd.  Sherman Hemsley, who played George Jefferson on TV's The Jeffersons, died two days ago at the age of 74.  Now comes word that Chad Everett, star of Medical Center, has succumbed to lung cancer.  The 75-year-old Everett died on July 24, 2012, at his home in Los Angeles.

Chad Everett was born on June 11, 1937 in South Bend, Indiana.  His birth name was Raymon Lee Cramton and he was raised in Dearborn, Michigan.  He developed an interest in theatre while attending Fordston High School in Dearborn.  After studying at Detroit's Wayne University, the aspiring actor decided to try his luck in Hollywood. His agent, Henry Wilson, was able to secure him a contract with Warner Brothers. Wilson, during the 1950s, managed a slew of handsome young male stars such as Rock Hudson, Tab Hunter, Robert Wagner and Troy Donahue.

At the time of his signing with Warner, Raymon Lee Cramton changed his name to Chad Everett, apparently because he was weary of explaining that Raymon had no "d" and Cramton had no "p."  The newly named Chad Everett's first noteworthy role came with his appearance in the 1960-1962 detective series Surfside.  A year later, he had a major role in the film Claudelle English.  He then portrayed Deputy Del Stark in the short-lived 1963 TV western, The Dakotas.  The up-and-coming actor appeared in myriad films and television series in the latter part  of the 1960s, but it was not until 1969 that he he got his big break when he was cast in the role of Dr. Joe Gannon in a new medical drama called Medical Centre.

To watch the introduction and opening theme of Medical Center, click on the link below.

Medical Center ran  for seven seasons, from 1969 until 1976, and it was a huge hit. Everett and his co-star, James Daley, played doctors at an unnamed hospital complex in Los Angeles.  Daly played the role of Dr. Paul Lochner, chief of staff. Everett's character, Dr. Joe Gannon, was an associate professor of surgery.  Gannon was sensitive, compassionate and good looking, the Dr. McDreamy of that particular television era.

The popular CBS series revolved around the personal conflicts and the health issues of the hospitals doctors and patients. One of its core conflicts was youth versus age and experience, as represented by Gannon and his venerable superior, Dr. Lochner.

Although Chad Everett will be best remembered for his role on Medical Center, his acting career spanned four decades.  He made guest appearances on a wide variety of television shows including The Love Boat, Murder, She Wrote, Touched by an Angel and Diagnosis Murder.  In 1998, he played the role of Thomas Sterling in four episodes of Melrose Place.

Chad portrayed a gay police officer named Jimmy Bruno in the detective series Cold Case.  The episode was entitled "Forever Blue" and it aired on December 3, 2006 (Season 4, Episode 10).  In 2009, he was noticed by a whole new generation of viewers when he played an older version of Dean Winchester in the fantasy series Supernatural.

Earlier this year, despite declining health, Chad Everett made his final television appearance in an episode of Castle, a comedy/drama about a novelist who is also a police detective.  The episode, entitled "The Blue Butterfly," aired on February 26. 2012.

Everett lost his wife of 45 years, actress Shelby Grant, just last year.  Shelby died of a sudden brain aneurysm on June 25, 2011 at the age of 74.  The couple were married on May 22, 1966 in Tucson, Arizona.  They had two daughters, Katherine Kerrie "Kate" Everett Thorp and Shannon Kimberly Everett, as well as six grandchildren.

* Chad Everett's politics were decidedly conservative and Republican.  He created a stir in 1972 when he angered comedian Lilly Tomlin on The Dick Cavett Show.  Tomlin, an ardent feminist, stormed off  the set when Everett made some extremely chauvinistic remarks.on Cavett's program.  She became infuriated when he referred when he referred to his wife, horse and dog as his "property."

* James Daly, Chad Evertt's co-star on Medical Center, died of heart failure on July 3, 1978.  Daly was 59 years old at the time of his passing.