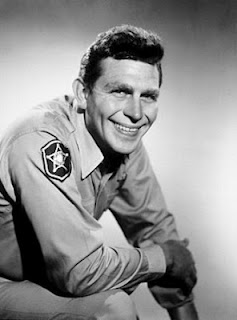 Another television legend is gone.  Andy Griffith, died today at his home on Roanoke Island in North Carolina.  The actor, best known for his role as Sheriff Andy Taylor on The Andy Griffith Show, was 86 years old.  He will be sadly missed and long-remembered for his easy-going Southern style.  It is fitting that this native of North Carolina passed away in his home state rather than in Hollywood.  From his down-home country style to his heavy Southern drawl, Griffith oozed a folksy charm that endeared him to television viewers.  He represented Main Street, not Tinseltown.

In response to the news of Andy Griffith's passing, Governor Beverly Perdue of North Carolina stated, "North Carolina has lost its favourite son.  Andy Griffith graciously stepped into the living rooms of generations of Americans, always with the playful charm that made him the standard by which entertainers would be measured for decades."  "In an increasingly complicated world."  she said, "we all yearn for the days of Mayberry."

Mayberry, North Carolina was the sleepy, fictional little town depicted on The Andy Griffith Show.  It was an idealized vision of small town America, unabashedly corny and undeniably sentimental at times.  It was also pure escapism.   In the 1960s, people took refuge from the  political and social turbulence of the times by following the adventures of Mayberry's citizens, including the town's sheriff, widower Andy Taylor, and his bumbling deputy, Barney Fife (Don Knotts).  Hollywood film director Ron Howard, a former child actor, played Andy's son, Opie.Taylor.  Howard was then known as Ronny.

There was peace and order in Mayberry and Sheriff Taylor was wise and trustworthy. The only "criminal"  was Otis Campbell, the town drunk, and the most serious crime was manufacturing bootleg liquor.  Andy's kindly Aunt Bee (Frances Bavier) was always there to deliver a scrumptious lunch to Andy at the courthouse or to bake an apple pie.  Many a show ended with Andy strumming his guitar as hie relaxed on his porch.

Life was much simpler in Mayberry and there was a clear difference between right and wrong.  Yet, although the town had a great sense of community, it also had a homogeneous population of white Protestants and there were no major black characters on the show.  "We tried in every way to get that to happen," Griffith once told USA Today, "but we were unable to do it."   (Hmmm . . .Why not?  Did the head honchos at CBS prevent it from happening?).

Andrew Samuel Griffith was born in Mount Airy, North Carolina on June 1, 1926, the only child of Carl Lee Griffith and his wife, Geneva (It is interesting to note that Andy was born on the very same day and year as Marilyn Monroe).  His parents were so poor that they were unable to take proper care of their child.  As a result, Andy had to live with relatives until his father obtained work as a carpenter and they were able to afford a new house.

Although he had originally intended to become a Moravian preacher, young Andy graduated with a degree in music from the University of North Carolina at Chapel Hill in 1949.  During his college years, he became involved in drama and musical theatre. Before launching his career as an entertainer in the early 1950s, Andy made his living as a high school music teacher in North Carolina..  He began his show business career by writing comic monologues and performing them at civic clubs.

In 1953, Andy Griffith had a hit record with the comic monologue "What It Was, Was Football."  He moved to New York City where he made regular appearances on Ed Sullivan's Talk of the Town and The Steve Allen Show.  He made his television debut in 1954 as a guest monologist on Sullivan's show.  In 1955, he became a Broadway star with the comedy No Time for Sergeants for which he earned a Tony nomination.

Andy made his big screen debut in 1957's A Face in the Crowd opposite Patricia Neal. The film, directed by Elia Kazan, featured Griffith as a homespun drifter named Lonesome Rhodes who, thanks to an enterprising local radio produces (Neal), becomes an outspoken political pundit and media sensation.

With the dawn of a new decade, Andy rose to stardom with his own television series. The Andy Griffith Show ran from 1960 until 1968.  It was a spin-off from a  episode of Make Room for Daddy, starring Danny Thomas.  In "Danny Meets Andy Griffith" (Season 7, Episode 20), Danny is arrested in Mayberry by Sheriff Taylor for a traffic violation.  The episode aired on February 15, 1960.

The Andy Griffith Show was a huge hit and it became a mainstay of 1960s American television.  Griffith left the show after the 1967-1968 season in order to pursue a film career and other interests.  He reprised his role as Andy Taylor in a 1986 television reunion special entitled "Return to Mayberry"  He also appeared in two other reunion specials in 1993 and 2003.

After the success of The Andy Griffith Show, Andy made several failed attempts to return to television stardom::  The Headmaster (1970-71), The New Andy Griffith Show (1971) on CBS, Salvage (1980) and the Western comedy series Best of the West (1981-82) on ABC.  In Headmaster, he portrayed Andy Thompson, the headmaster of the Concord School, a private California high school with high academic standards.  In The New Andy Griffith Show, he reverted to his small town country boy role as Andy Sawyer, who returns home to become interim mayor of Greenwood, North Carolina after working in the state capital.  Lee Meriwether portrayed his wife in the series.


Andy finally had another hit in 1986 with the courtroom drama Matlock.  In that murder mystery series, Griffith starred as Ben Matlock, a good-natured but crafty Atlanta lawyer.  Matlock was a Harvard-educated, Perry Mason-like defence attorney.  He would always prove the innocence of his clients with some last-minute revelation.  The show aired on NBC from  1986 until 1992 and on ABC from 1993 to 1995.  Andy's old friend, Don Knotts, appeared as Les Calhoun, Matlock's annoying neighbour, for 17 episodes from 1988 until 1992.  Knotts, who passed away on February 24, 2006 at the age of 81, also played Barney Fife in the very first episode of The New Andy Griffith Show.

Andy Griffith was married three times.  His first wife, Bray Edwards, was a fellow actor at the University of North Carolina at Chapel Hill.  The couple wed on August 22, 1949 and they adopted adopted two children: a son, Andrew Samuel Griffith Jr., born in 1957, and a daughter, Dixie Nan Griffith.  Their son, Andy Jr. (known as Sam), was a real estate developer and he died of alcohol abuse in 1996.  Barbara and Andy divorced in  1972.

In 1973, Andy Griffith married for a second time, to Greek actress Solica Cassuto. That marriage ended in 1981.  On April 12, 1983, Andy wed Cindi Knight, whom he met during the filming of the television movie Murder in Coweta County.  Cindi was with him at the time of his death.

* In 1983, Andy Griffith was stricken with Guillen-Barre syndrome, a debilitating muscular disease that left him paralyzed.for months.  After undergoing private rehabilitation, he made a full recovery and was able to resume his acting career.

* Andy's hometown of Mount Airy is widely thought to be the inspiration for Mayberry.  Not surprisingly, Mount Airy's website highlights the town's similarity to Mayberry in order to promote tourism.  A blurb on the site reads as follows:

Step back to a simpler time when you visit Mount Airy.  Actor Andy Griffith grew up here, and it's no co-incidence that a stroll down Mount Airy's Main Street reminds people of the town of Mayberry from the Andy Griffith Show.

Mount Airy boasts an Andy Griffith Museum which contains memorabilia and props from the set of The Andy Griffith Show and Matlock.   The town also features Mayberry landmarks such as Floyd's Barber Shop and Wally's Garage.

Editor's Note:  Official records, including Andy Griffith's death certificate, were released on July 5, 2012.  They reveal that the cause of his death was a heart attack.