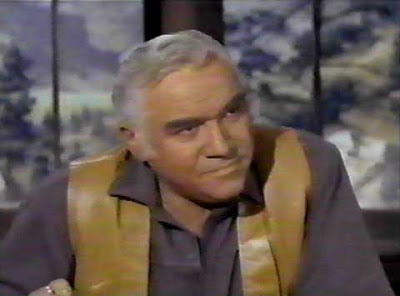 For 14 seasons, Lorne Greene played all-American cowboy Ben Cartwright on the television Western, Bonanza.  Greene, however, was actually a Canadian boy.  He was born in Ottawa, Ontario, on February 12, 1915, the only child of Daniel and Doris Green, Russian Jewish immigrants whose original name was Grinovsky.  Lorne's birth name was Lyon Himan Green but his mother referred to him as "Chaim."  At some point, he began calling himself Lorne and added an "e" to his last name.  In her 2004 biography, My Father's Voice: The Biography of Lorne Greene, his daughter, Linda Greene Bennett,  wrote that it is not known when he changed his name.

Greene attended Queen's University in Kingston, Ontario, originally intending to pursue a career in chemical engineering. His heart, however, was in acting.  According to daughter Linda, in order to participate in the university's drama guild, "he altered his course registration, deleting chemical engineering and adding modern languages instead." During his years at Queen's, he became active in amateur theatre and as Linda put it, "began the uncertain journey to follow his dream."

After graduation, Lorne spent two years in New York studying drama.  He then settled in Toronto and worked as a radio broadcaster.  Gifted with rich-sounding vocals, he was so successful that he became the chief news broadcaster for the Canadian Broadcasting Corporation (CBC) from 1939 until 1942.  The CBC billed him as "The Voice of Canada" and listeners nicknamed him "The Voice of Doom" because of the deep intonation of his sonorous voice and because of the grim events he reported to Canadians during the darkest days of World War II.

Lorne Greene left the CBC in 1942 to serve as a flying officer in the Royal Canadian Air Force.  Following his service in the war, Greene returned to Toronto and pursued his interest  in radio broadcasting but did not resume his job as chief news announcer for the CBC.  Instead, he established the Toronto's Academy of Radio Arts and worked as an instructor there, teaching young people the fundamentals of radio broadcasting.  He also co-founded the Jupiter Theatre in Toronto.

In 1953, Lorne Greene headed to the United States where he performed on Broadway, in films and in the burgeoning new medium known as television.  During the 1950s he began appearing in various roles on live and filmed TV programs.  In 1953, he played Othello in a one-hour version of Shakespeare's classic.  In 1955, he was cast as Ludwig van Beethoven in an episode of You Are There, a CBS educational series hosted by Walter Cronkite.  The actor also appeared on the big screen.  He played the part of the prosecutor in the 1957 film Peyton Place and appeared as Mercier in The Buccaneers, a 1958 historical epic about the Battle of New Orleans directed by Anthony Quinn.

Lorne Greene's big break came in 1959 when an American producer, David Dortot, noticed him in a minor role on the television Western, Wagon Train. Dortot was impressed by the actor's performance and thought he would be perfect for the part of the father figure  in a new Western he was developing for NBC.   Greene then won his first continuing role on a television series when he was cast as Ben Cartwright, the family patriarch on Bonanza.  Greene's character, the thrice-widowed Ben, guided his three sons (each by a different wife) and defended the prosperous family's sprawling ranch, known as The Ponderosa.  Bonanza became a staple of NBC's Sunday night line-up for years and Greene's portrayal of the tough but wise "P:a" Cartwright made him a household name.

Lorne Greene based his portrayal of Ben Cartwright on his own father, Daniel, the Ottawa shoemaker,  That's the reason why he was able to play the play the part of the patriarch so well.  As a child, whenever he misbehaved, Daniel would give him "one of those looks."  On the Ponderosa, Lorne would give his television sons, Adam (Pernell Roberts), Hoss (Dan Blocker) and Little Joe (Michael Landon), "the same look" if they acted up.

After Bonanza went off the air in 1973, Lorne Greene starred in the  NBC crime drama, Griff.  The series was short-lived, but for Greene it was an attempt to replace his Pa Cartwright image with a more contemporary role.  In Griff, he played Wade Griffin, a veteran police captain who, after resigning from the force on a matter of principle, decided to start his own business as a private investigator.  Due to low ratings, the show was cancelled after a mere 13 episodes.

Duing the 1970s, Lorne Greene appeared in three popular television mini-series: The Moneychangers (1976), Roots (1977) and The Trial of Lee Harvey Oswald (1977)  In The Moneychangers, based on Arthur Hailey's novel about the politics and greed inside a major American Bank, Greene played the part of George Quartermain.  In Roots, he appeared as John Reynolds, the first master of Kunta Kinte.  In The Trial of Lee Harvey Oswald, an alternate history of what might have happened if Lee Harvery Oswald had gone on trial for the assassination of John F. Kennedy, he starred as Matthew Arnold Watson.alongside Ben Gazzara as Anson "Kip" Roberts and John Pleshette as Oswald.

For many years, Lorne Greene was the chief spokesman for Alpo, a beef-flavoured dog food, on its television commercials.  When he died, Alpo's ad agency announced that he would not be replaced by another celebrity spokesman for its product.

Click below to watch some of Lorne Greene's Alpo ads.

Click below to view a 1979 Alpo ad with Lorne Green and Victoia Principal.

In 1978, Lorne Greene took the lead role in a much-hyped ABC science fiction series Battlestar Galactica.  The series centred on some human refugees Greene portrayed Adama, the silver-haired commander of the Galactica.  The show was full of costly special effects and laser battles.  It was so similar to Star Wars that the producers of Star Wars sued ABC for "stealing' their film.  Despite the initial hype, rating for the show declined and it was cancelled after a single season.  It returned, however, in early 1980 in a revamped form and with a new title, Galactica 1980.  Lorne Greene was the only remaining member of the original cast.

From 1981 until 1982, Greene starred in yet another short-lived television series. The series, entitled Code Red, was produced by Irwin Allen and it aired on ABC on Sunday evenings.  This time Greene played Joe Rorchek, a 30-year veteran of the Los Angeles Fire Department.  Rorchek, an arson investigator, was the patriarch of a family of firefighters and Julie Adams portrayed his wife, Ann.   The show was instructional and provided lessons in fire safety.

During the 1970s and 1980s, Lone Greene devoted much of his time to ecological and wildlife issues.  From 1974 to 1975, he hosted a syndicated nature series entitled "Last of the Wild."  ,From 1982 until 1986, he hosted  Lorne Greene's New Wilderness, a Canadian nature documentary series that promoted environmental awareness.  It was a half-hour compilation of footage showing wildlife for which Greene provided on-camera and voice-over narration. The CTV series garnered high ratings in Canada  and  it also enjoyed success when it was syndicated in the United States and in other countries.

Lorne Greene was married twice. His first wife was Rita Hands of Toronto.  Lorne and Rita wed in 1938 (some sources say they were married in 1940) and divorced in 1960.  They  were the parents of twins, Belinda Susan and Charles, born in 1945. Belinda (now known as Linda Greene Bennett) became the author of the aforementioned biography of her father. Charles Grreene was co-producer, along with documentary producer/writer Stephen Dewar, of Lorne Greene's New Wilderness.

Lorne Greene's second spouse was Nancy Deale, whom he wed on December 17. 1961.  They remained together until Lorne's death and they raised a daughter, Gillian Dania,.who was born in Los Angeles on January 6, 1968.  Nancy Deale Greene died of cancer in Marina del Rey, California on March 2, 2004.  Gillian Greene married film producer, director and actor Sam Raimi in 1993.  Raimi is best known for directing cult horror/ comedy films.  They have five children.

Lorne Greene died of complications from pneumonia in Santa Monica, California on September 11, 1987.  His death occurred after he had undergone surgery for a perforated ulcer.  The 72-year-old had been scheduled to reprise his role as Ben Cartwright in Bonanza: The Next Generation, a syndicated television movie.  Due to Lorne's  health problems, the script had already been altered so that his part would be less physically taxing.  He was eventually replaced by veteran actor John Ireland who played Ben's brother, Aaron Cartwright.

Bonanza: The Next Generation aired in 1988 and featured Lorne's own daughter, Gillian Greene, in the role of Jennifer Sills and Michael Landon, Jr. as Benjamin "Benji" Cartwright.

* During his radio days, Lorne Green invented a stopwatch that ran backwards.  It was designed to help radio announcers determine how much time they had available while they were broadcasting.

* In 1964, Lorne Greene had a Number #1 hit in the United States with his recording of "Ringo," a spoken-word song about a real-life Old West Outlaw.named Johnny Ringo.

* Lorne Greene appeared in a 1985 episode of Michael Landon's series Highway to Heaven (Season 2, Episode 8, Air Date: November 20, 1985).  Greene played a character named Fred Fusco in this episode about the lead actor in a Broadway play who insists that God is attending the show's performances in an orchestra seat.

* Lorne Greene has a star on the Hollywood Walk of Fame and he was made an Officer of the Order of Canada on October 28, 1969.

To watch a television news report of Lorne Greene's death, click on the link below.