Looking back at Captain Kangaroo

Captain Kangaroo, a round-faced, pleasant mustachioed man possessed of an unshakable calm . . . Captain Kangaroo was one of the most enduring characters television ever produced.


Before Sesame Street, there was Captain Kangaroo. When I was a child here in Toronto, I always watched Captain Kangaroo on CBS's Buffalo affiliate.  The popular children's morning show was hosted by Bob Keeshan who played the role of the grandfatherly Captain Kangaroo.  With his wig of long grey hair and bangs (he sported a Beatles hairdo well before The Beatles came on the scene) and his trademark walrus moustache, Keeshan was a familiar figure to children for decades. His character was called Captain Kangaroo because of the large pockets in the oversized red jacket he always wore.

Robert James "Bob" Keeshan was born in Lynbrook, Long Island, New York on June 27, 1927.  He attended Forest Hills High School in Queens, New York. During World War II, at the age of 17, he enlisted in the US Marine Corps Reserves.  He never engaged in combat, having joined too late, and when Japan surrendered in 1945, Bob was still in the United States.  After leaving the service, he attended Fordham University in New York City.

Soon after the war, network programming began on a brand new medium called television.  Young Keeshan worked as a page at the National Broadcasting Company (NBC).   In 1947, he commenced his on-screen career as the original Clarabell the Clown on NBC Puppet Playhouse, later known as The Howdy Doody Show.  Keeshan was fired as Clarabell on Christmas Eve of 1952 due to his strained relationship with the show's host, "Buffalo" Bob Smith.

In August of the same year, Bob was hired to develop Time for Fun, a lunchtime clown show on the ABC network's New York affiliated station.  Keeshan portrayed a gentle, quiet clown named Corny on the one-man show.. He later hosted a morning program, Tinker's Workshop, in which he played a toymaker.

When asked to create a children's show for a network, Bob Keeshan jumped at the opportunity and he came up with the idea for Captain Kangaroo.  On October 3, 1955, Captain Kangaroo began its extraordinary run of almost 30 years on the CBS television network.  In addition to playing the Captain, Keeshan performed as the Town Clown on the program.

In his review of Captain Kangaroo for the The New York Times, John P. Shanley wrote glowingly of the show..  He described it as "civilized and absorbing fun."  Shanley opined that parents were discovering that their weekday mornings were "more bearable because of the delightful artistry of Bob Keeshan."  He stated that Keeshan charmed the toddlers.

The program.was loosely structured and it took place in the "Treasure House."  At the show's opening,  Captain Kangaroo would unlock the Treasure House and he would wake up the snoring Grandfather Clock.  He would tell stories, meet guests and participate in stunts with both human characters and puppets.such as Bunny Rabbit, Mr. Moose and Dancing Bear.  Bunny Rabbit, a bespectacled hare, was always ready to snatch the Captain's carrots.  Mr. Moose would trick the Captain with a knock-knock joke and scores of  ping pong balls would fall on the Captain's head.

Click on the link below to watch the opening of the show in black and white episodes.

Watch this video clip from a later colour episode of the show in which the ping pong balls fall on Captain Kangaroo.

Captain Kangaroo's sidekick was Mr. Green Jeans, a handyman who helped at the Treasure House.and who often showed the Captain the latest addition to his menagerie of zoo animals. As portrayed by Hugh "Lumpy" Brannum, Mr. Green Jeans always wore a straw hat was dressed in green farmer's overalls.  His moniker was derived from his distinctive outfit.  (He later dressed in jeans and a green denim jacket.)  Although the show was broadcast in black and white until 1966, most viewers were well aware of the colour of his attire.

In an interview with L. Wayne Hicks on the TVparty! website, Bob Keeshan praised Hugh Brannum and pointed out how Brannum was ahead of his time and that Mr. Green Jeans was really green in more ways than one.  When asked what Brannum brought to Captain Kangaroo, Keeshan replied, "He was talking about the environment in 1955 . . . .Nobody talked about the environment in those days, not certainly on a general program and certainly not one for children  . . . "He was a protester when they were building dams and rivers that would destroy homes and properties.  He was for clean water.  He was for clean air.  He was for non-fossil fuels . . .  His reverence for life was there.  It was for growing things, the vegetables and the plants he would literally bring from his farm in Pennsylvania."

In addition to Mr. Green Jeans, the talented Hugh Brannum played the roles of several other minor characters such as The Professor, Greeno The Clown, The Old Folk Singer and Mr. Bainter the Painter.  Brannum died on April 19. 1987.  He was 77 years old at the time of this death.  Below is a 1960 photo of Brannum as Mr. Green Jeans celebrating the fifth anniversary of Captain Kangaroo with Dancing Bear (Cosmo Allegretto). 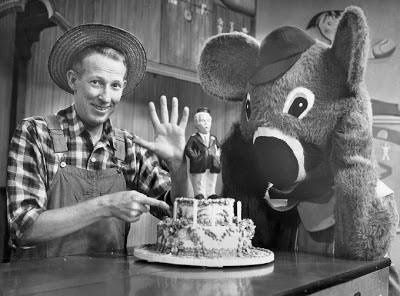 On December 8, 1984, Captain Kangaroo ended its run on CBS.  In 1986, however, the American Program Service (now American Public Television, Boston) combined some newly-made segments of the show with reruns of old episodes.  This new version of Captain Kangaroo aired until 1993.

Through the years, the show received many awards and accolades including six Emmy awards and three Peabodys.  It was innovative in many ways and it changed the complexion of children's television.  Bob Keeshan had a way of interacting with children.  He spoke directly into the camera, as if he were addressing each child individually.  He was an excellent communicator and he was able to educate his young audience in a fun way though the use of puppets and pranks. His message to children was to feel comfortable about themselves and he delivered that message calmly and in a soft-spoken manner.

In July of 1981, Bob Keeshan suffered a heart attack soon after arriving at Toronto's international airport.  He was then 54 years old and had come to the city to receive an award for his service to children.  He underwent triple-bypass surgery and was bombarded with thousands of get-well messages from his fans.

For many years, Bob Keeshan lived in Babylon Village, Long Island.  He spent the last 14 years of his life, however, in Norwich. Vermont, near the New Hampshire border.  He devoted his time to advocating for the welfare of children and he strongly opposed video game violence.  Keeshan was also an outspoken critic of corporal punishment and he served on the U.S. National Committee for Prevention of Child Abuse.  In 1995, he published  his memoirs, Good Morning, Captain: 50 Wonderful Years with Bob Keeshan, TV's Captain Kangaroo.

Bob Keeshan died in Hartford, Vermont on January 23, 2004 at the age of 76.  He was predeceased by his wife of 45 years, Anne Jeanne Laurie Keeshan, who died on February 25, 1996.  The couple had three children: Michael Derek, Laurie Margaret and Maeve Jeanne.