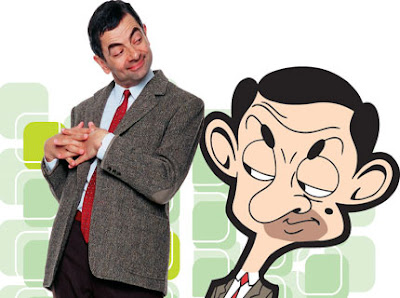 As a fan of British comedian Rowan Atkinson and his portrayal of the comical Mr. Bean, I was disappointed to read that the character may soon be put to rest.  In an interview with the  U.K.'s Daily Telegraph last weekend, Atkinson stated, "The stuff that has been most  commercially successful for me. - basically quite physical, quite childish - I increasingly feel I'm going to do a lot less of."  The actor is 57 years old now and he feels that he is becoming too old for the part.  He said, "Apart from the fact that your physical ability starts to decline, I also think someone in their fifties being childlike becomes a little sad.  You've got to be careful."

Rowan first rose to prominence on the BBC satirical sketch comedy Not the Nine O'Clock News.  He did not achieve worldwide fame, however, until he began playing the role of Mr. Bean.  Mr. Bean, the television series, aired from 1990 to 1995 on Britain's ITV network. There were 14 episodes and they were 25 minutes in length.

Mr. Bean is based on a character created by Atkinson while he was studying for his master's degree in Electrical Engineering at Queen's College, Oxford University.  Mr. Bean is usually attired in his trademark tweed jacket and thin, red tie.  He is self-cemtred, socially awkward and seldom speaks.  His best friend is Teddy, his beloved button-eyed teddy bear.  He lives alone in a tiny flat in Highbury, a district in the London borough of Islington and he drives a keylime British Leyland Mini 1000.  As for a first name, Mr. Bean doesn't really have one.  In the first film adaptation of the character, the first name on his passport reads "Mr."  In the second Mr. Bean film, he name is listed as "Rowan."

Bean has zero finesse with women.  In several episodes of the television series, he has a girlfriend named Imma Gobb, portrayed by Matilda Ziegler.  Bean, of course, does not treat Imma graciously nor with much regard.  In a 1990 episode entitled "Mr. Bean Goes to Town," he takes her to a nightclub and the date turns out to be a disaster.  Bean ruins a magician's show and then loses Imma to another man on the dance floor.  To view a video of Mr. Bean's disastrous date, click on the link below.

I'm partial to Mr. Bean's hilarious 1992 Christmas episode, "Merry Christmas, Mr. Bean."  It was Episode 7 of the television series and it marked the final appearance of Matilda Ziegler as Imma. I love the scene where a turkey is stuck on Bean's head.   "Merry Christmas, Mr. Bean," was viewed by 18.48 million Britons.  The highest rated Bean episode, however, was Episode 5, "The Trouble with Mr. Bean." (originally aired on January 1, 1991).  It attracted an audience of 18.74 million viewers.

Rowan Atkinson has also starred in two Mr. Bean feature films, Bean: The Movie (1997) and Mr. Bean's Holiday (2007).  In Bean: The Movie, the buffoonish Bean travels to American where he is given the responsibility of delivering a highly valuable work of art to a Los Angeles museum.  In Mr. Bean's Holiday, Bean wins a trip to Cannes where he unintentionally separates a young boy from his father while discovering the joys of France, bicycling and romance.

A true innocent, Bean's humour comes from his lack of savvy, and his humour is physical.  It is the kind of universal slapstick comedy that can be enjoyed by all backgrounds and cultures.  Because so few words are spoken, one doesn't even have to speak English to understand and appreciate the Mr. Bean's humour. His comedic style is reminiscent of Charlie Chaplin's "Little Tramp."

Last summer, Rowan Atkinson did his Mr. Bean routine at the opening ceremony of the 2012 London Olympics. In a memborable skit, he joined the orchestra playing one note on a synthesizer as they performed the theme from Chariots of Fire.  Feigning boredom, he snapped a photo with his phone, sneezed and then daydreamed.  The audience was then treated to a back-slapping parody of the opening sequence from Chariots of Fire in which Mr. Bean dreams of running along the beach with the Olympians in the film. With the assistance of a car, he crosses the finish line first.  Atkinson's performance at he Olympics sparked a barrage of tweets on Twitter.

To watch a video of the Chariots of Fire skit, click on the link below.


I can't really fault Rowan Atkinson for his desire to stop playing the Mr. Bean character even though Bean remains extremely popular.  He probably wants new challenges and he doesn't relish the thought of being constantly typecast as a bumbling boy-man.  Rowan is clearly tired of playing Mr. Bean and he obviously can't do it forever.  He is now more interested in performing in live theatre and will soon play the title role in Quartermaine's Terms in London's West End.  Rowan Atkinson has to do what's right for him, even if his fans aren't happy about it.  He's got to follow his own instincts.

Note to Canadians: One of Mr. Bean's earliest appearances took place in 1987 when Rowan Atkinson performed at the Just for Laughs (Juste Pour Rire) Festival in Montreal.  He purposely performed in front of a French-speaking audience to see how his character would go over in front of a non-English-speaking crowd.