The Smothers Brothers Then and Now 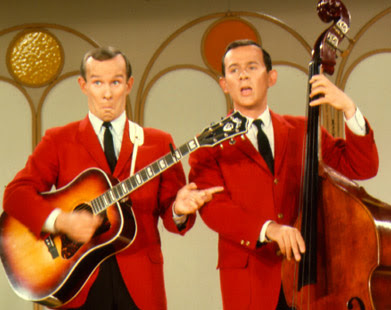 Let's go back to the time when Richard Nixon was President of the United States, a war in Southeast Asia was tearing at the very soul of America and young people were tuning in to comedy of Tom and Dick Smothers.  The Smothers Brothers didn't look radical or rebellious in their red blazers, but back in the late 1960s, they hosted one of the most controversial shows on American television.  Their popular Sunday night variety program, The Smothers Brothers Comedy Hour, tested the boundaries of censorship in the United States during the Vietnam War era - until it was ultimately cancelled by CBS.  That is why the brothers have earned a special place in the annals of American television history

Thomas Bolyn "Tom" Smothers III was born on February 2, 1937 and his younger sibling, Richard Remick "Dick" Smothers was born on November 20, 1939.  Their father, Major Thomas B. Smothers, Jr., was a U.S. Army officer and the brothers were born on Governor's Island in New York Harbor, where he was stationed.  After the death of Major Smothers while being transported from a Japanese prisoner of war camp, Tom and Dick were raised by their mother, Ruth (nee Remick) in the Los Angeles area.

The brothers began performing folk songs with Tommy playing acoustic guitar and Dick on string bass.  They eventually added comedy to their routine.  Dick became the straight man to Tom's dimwitted persona.  After being reprimanded by his sibling for his behaviour, Tom would appear dumbfounded and lost for words.  After a hesitating, he would stammer a reply which usually ended with a retort that "Mom always liked you best."

The Smothers Brothers first national television appearance occurred on the Jack Paar Show on January 28, 1961.  Their first television show was a fantasy sitcom on CBS called The Smothers Show.  The series ran from 1965 until 1966 and featured Tom Smothers as a blundering apprentice angel who was assigned to good works on Earth in order to earn recognition as a full-fledged angel.  Tom complicated the life of his earthly brother, Dick, an up-and-coming executive at Pandora Publications, who was forever bailing him out of difficulties.

The Smothers Brothers' second television show, a weekly variety/comedy series entitled The Smothers Brothers' Comedy Hour, was first telecast on CBS on February 5, 1967.  It was irreverent, satirical and extremely popular with the younger set.  On Sunday nights, while their parents were watching Bonanza, the flower children were watching Tom and Dick and their array of left-leaning and anti-war guests. For example, folk singer Pete Seeger appeared on the show and sang "Waist Deep in the Big Muddy," a Vietnam War protest song.  Joan Baez lauded her then-husband, David Harris, who went to prison for refusing military service.

In 1967, The Who appeared on the show and created a stir when they accidentally caused an explosion while smashing instruments at the conclusion of a performance of "My Generation." (unknown to Keith Moon, a stage hand placed an extra explosive in the small cannon Moon kept in his bass drum). Guitarist Pete Townshend then grabbed Tom Smothers' guitar and smashed it too.  The explosion set Townshend's hair on fire and is alleged to have contributed greatly to his hearing loss.

Click below to watch a video of  The Who on The Smothers Brothers Comedy Hour.

As the 1968/1969 season began, there were so many conflicts with CBS network censors, that the Smothers Brothers were compelled to deliver their completed material ten days before the broadcast date so that the shows could be edited.  CBS censored an entire segment of the season premiere which featured Harry Belafonte singing "Lord, Don't Stop the Carnival" against a backdrop of the riots at the 1968 Democratic Convention in Chicago.

The Smothers Brothers also got into trouble when their show tackled the sensitive subject of religion and clergy.  Canadian-born comedian David Steinberg, whose own father was a rabbi, caused a great deal of controversy with a skit in which he provided a rabbinical sermon on the subject of  Moses and the Burning Bush.  According to David Bianculli, author of Dangerously Funny: The Uncensored Story of The Smothers Brothers Comedy Hour, after CBS pulled the plug on The Smothers Brothers Comedy Hour, Steinberg declared that "the most innovative show on television" had been shut down due to "political pressure."


The Smothers Brothers Comedy Hour featured the dead pan comedy and satirical wit of Pat Paulsen.  Paulsen's campaign for the presidency, which he he had begun during the Smother Brothers' 1968 summer series, caused problems for CBS.  Paulsen used the slogan "If nominated I will not run, and if elected I will not serve."  Although his candidacy was obviously not meant to be taken seriously, CBS was concerned that real candidates would demand equal time.  As a result, the network banned him from the show until after the election. 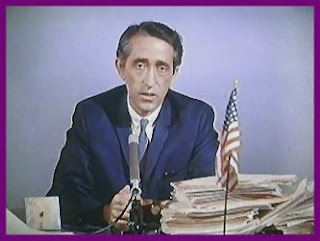 Another regular performer on the Smothers Brother Comedy Hour was singer Jennifer Warnes (then billed as Jennifer Warner or simply Jennifer).  Warnes, who appeared on the show from 1967 until 1969, went on to win three Academy Awards in the Best Song category and two Grammys.  She is best known for "Up Where We Belong," her duet with Joe Cocker from the 1982 film An Officer and a Gentleman and "(I've Had) The Time of My Life," a collaboration with Bill Medley, from Dirty Dancing (1987).

By 1969, CBS management had lost patience with the Smothers Brothers and abruptly cancelled their show despite its high ratings.   Although the cancellation sparked a debate over free speech, CBS held fast to its decision and replaced the brothers with a country bumpkin variety show called Hee Haw which was hosted by Roy Clark and Buck Owens.  Not surprisingly, Hee Haw, with its deliberately cornball humour (it took place in the fictional rural setting known as Kornball Kounty), was dropped by the network in 1971 when it decided to appeal to a younger, more hip, urban audience.  The show went into local syndication and became a long-lasting hit.  Many years of non-network episodes of Hee Haw were produced until the series ended in 1997.

In July of 1970, thirteen months after their show's cancellation,  the Smothers Brothers hosted a summer program on ABC, called The Smothers Summer Show.  It was not, however, included in the network's fall lineup.  In the autumn of 1971, Tom Smothers starred in a syndicated half-hour comedy without his brother.  It was entitled Tom Smothers Organic Prime Time Space Ride.  It did not make much of an impact and was not renewed.

On February 3, 1988, CBS broadcast The Smothers Brothers Comedy Hour 20th Reunion Show despite the fact that the original series has been such a headache for the network.  Ratings for the special were good enough that CBS granted the brothers another series.  The second version of The Smothers Brothers Comedy Hour, was short-lived and only lasted from March of 1988 until August of 1989.  According to The Complete Directory of Prime Time Network Shows 1946-Present, it was "sharply written and topical, but here was certainly a sense of deja vu - Tom and Dick's sibling rivalry was as strong as ever."   It also should be noted Pat Paulsen and Jennifer Warnes made guest appearances on the 1980s edition of the show.

Tom Smothers is now 76 years old.  He is the owner of Remick Ridge Vineyards (his mother's maiden was Remick) in Sonoma County, California.  Tom and his third wife, Marcy Carriker, whom he married in 1990, are the parents of two children, Bo (born 1993) and Riley Rose (born 1996).  Tom is also the father of a son, Thomas Bolyn Smothers IV (known as Tom Jr.), from his first marriage to Stephanie Shorr, whom he wed in 1963 (they were divorced in 1967).   Tom was also married to Rochelle Robley from 1974 until 1976.

Dick has two children from his marriage to Lorraine Martin, whom he wed on September 19, 1986.  They are Sarah Alexandra (born June 1987) and Remick Harper (born October 16, 1989).  Lorraine and Dick were divorced in May of 1994 after which Dick married Denby Franklin in Las Vegas in 1997.  He and Denby divorced in 2006.  Dick also has a son named Andrew.

In February of 2010, Dick Smothers filed for Chapter 11 bankruptcy protection, citing $2 million in assets and a debt of $2.8 million.  In August of 2012, the Herald Tribune reported that U.S. Bank had won a $705,961 foreclosure decision against Dick's ex-wife, Denby, a high end real estate agent.  Denby lost the property, an 1,823 square foot (169.3 square metres) condominium on Goldon Gate in Sarasota, Florida which she and Dick had purchased in May 2005.  After their separation, Denby became the sole owner of the condo.

In 2008, during the the 60th Prime Time Emmys, Tom Smothers received a special award.  It was presented to him by Steve Martin. ( In 1968, when Tom was head writer for the Smothers Brothers Comedy Hour, the writing staff  won the Emmy for Outstanding Writing in a Comedic Series.  At the time, he had declined to include his name on the list of nominated writers because he thought it would cause too much conflict.)

In May of 2010, the Smothers Brothers announced their retirement from touring.

* Pat Paulsen passed away on April 24, 1997 in Tijuana, Mexico after an 18-month battle with colon cancer.  He died of pneumonia while undergoing treatment for the disease. Paulsen was 69 years old at the time of his passing. 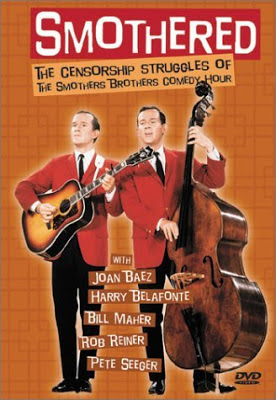