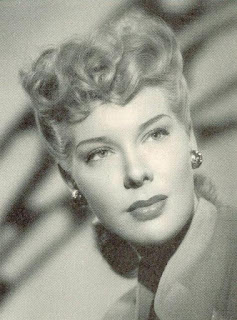 Joyce Randolph is best known for her role as Trixie, the wife of happy-go-lucky sewer worker Ed Norton (Art Carney) in the "Classic 39" episodes of The Honeymooners.  Trixie and Ed were the best friends and upstairs neighbours of Brooklyn bus driver Ralph Kramden (Jackie Gleason) and his no-nonsense wife, Alice (Audrey Meadows).

Born Joyce Sirola in Detroit, Michigan on October 21, 1924, Randoph is of Finnish descent. Her acting career was launched when, as a 19-year-old, she joined a touring company of the play Stage Door.  In 1943, she arrived in New York City to further pursue her career and appeared on Broadway in productions such as A Goose for the Gander with Gloria Swanson.

Although Joyce continued to perform in Broadway shows throughout the 1940s and into the early 1950s, she became more and more involved in early television.  She worked with such legendary performers as Dean Martin, Jerry Lewis, Danny Thomas, Fred Allen and Jack Benny.  In 1954, she had the uncredited role of Judy in an episode of The Jack Benny Program entitled "How Jack Found Mary." (Season 5, Episode 3, Air Date: October 31, 1954).

As far back as 1946 , Joyce Randolph made her first TV appearance on experimental station WRGB in Scenectady, New York.  She later had roles on the old DuMont television network in Martin Kane Private Eye and The Plainclothesman.  In 1949, she appeared in some episodes of Famous Jury Trials, a half hour courtroom drama on DuMont.

In 1951, she began playing Thelma "Trixie" Norton in The Honeymooners skit on The Cavalcade of Stars, Jackie Gleason's variety show, also on DuMont,   Randolph won the role of Trixie after appearing on live Clorets breath-mint commercials on the show.  She never auditioned for the role.  She was merely informed that Jackie Gleason wanted her to work with him in a dramatic skit on The Calvacade of Stars. "I  just sat there like a lump," she told Jane Woolman Rusoff in a July 2012 New York Times interview.

Joyce appeared in the dramatic skit and a fortnight later she received a call that Gleason wanted `"that serious actress" to play Trixie.  She had never heard of The Honeymooners but she got the part without an agent negotiating anything for her

Some New York writers dubbed Joyce Randolph "the Garbo of Detroit."  "That's still a mystery," she stated in a New York Times article (January 27, 2007) entitled "For TV's Trixie, the Honeymoon Lives On."  "I was a nobody in Detroit," she added.  "Why Garbo?  Well, she was Scandinavian - and so was I."

In the autumn of 1952, according to The Complete Directory to Prime Time Network TV Shows: 1946-Present, "the lure of money" brought Jackie Gleason to CBS.  The comedian had been the star of The Cavalcade of Stars on DuMont since the summer of 1950.  DuMont was struggling financially (it ceased broadcasting in 1956) and CBS offered Gleason a hefty increase in weekly pay with enough funding to improve the his show's production.  It was an offer he did not refuse.

When the show moved to CBS, it was retitled The Jackie Gleason Show and Audrey Meadows replaced Pert Kelton, who had been blacklisted during the McCarthy era, in the role of Alice Kramden.  Joyce Randolph had actually worked with Audrey prior to The Honeymooners.when the two women appeared in a summer stock production of the musical No, No, Nanette.in Louisville, Kentucky.  They got to know each other on the train to Louisville because it was delayed behind a "troop train" of soldiers during the Korean War.  They had no idea they would be working together on television.

In her two-hour interview with the Archive of American Television, Joyce described Meadows as "very quick-witted and very sweet."  She said that "Audrey was a very talented lady - a great singer.  She started out as a singer."  Randolph also told The York Times in 2012 that "Audrey was very smart.  She learned every word of The Honeymooners scripts so she could get Jackie back on track if she had to."

By 1955, Jackie Gleason wanted a break from the demands of a one hour variety program.  A decision was made to film a complete season of The Honeymooners, consisting of 39 episodes, and fill the other half of Gleason's allotted hour on CBS with Stage Show, a musical variety series.  Stage Show, owned by Gleason, featured Tommy and Jimmy Dorsey and the June Taylor Dancers.

On October 1, 1955, The Honeymooners debuted as a half-hour comedy series in its own right on CBS.  Its fiercest competition came from The Perry Como Show on the NBC network.  All of the classic 39 episodes were filmed before a live audience and continue to be rerun on local stations.


On October 2, 1955, just one day after the debut of The Honeymooners on CBS, Joyce married wealthy marketing executive Richard Lincoln "Dick" Charles.  The wedding took place in a Baptist church on Long Island, New York.  The couple had one son, Randolph Richard "Randy" Charles, born in 1960.  Dick passed away in 1997 at the age of 74.

Their son Randy, now 53, attended Harvard Business School and was a marketing executive in Philadelphia, Pennsylvania.  He is currently President of Elsevier Business Intelligence, the world's leading publisher of medical, scientific and technical information and is located in the West Palm Beach, Florida area. 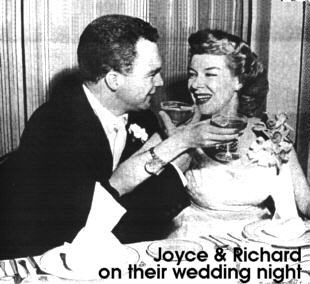 In the fall of 1956, with Stage Show's lack of success and The Perry Como Show's dominance of The Honeymooners, Gleason reverted to his regular variety show format.  Art Carney left The Jackie Gleason Show in 1957.  When he returned for the 1966-67 season, The Honeymooners was revived in the form of full-hour colour episodes.  There were other changes too.  At Gleason's insistence, the show had been moved from New York to Miami.  Sheila MacRae had replaced Audrey Meadows in the role of Alice Kramden and Jane Kean had replaced Joyce Randolph as Trixie Norton.  This Honeymooners quartet travelled and sang musical numbers.

In 1964, Joyce made a guest appearance in the CBS medical drama The Doctors and Nurses.  She played Alice Loring in an episode entitled "The Prisoner: Part 2" (Season 3, Episode 3, Air Date: October 6, 1964).  In 1991, she portrayed Trixie Norton in an episode of Hi Honey, I'm Home!, an unusual show about a 1950s sitcom family, the Nielsens (named after the Nielsen ratings), that was transferred to 1990s suburbia via the Sitcom Relocation Program.  Randolph appeared in an episode of the series entitled "Fur Flies" (Season 1, Episode 3, Air Date: August 2, 1991).  She also portrayed a dog walker in the 2000 feature film drama Everything's Jake, about a homeless man in New York City.

Now 88 years old, Joyce Randolph has resided in the same Manhattan apartment building since 1959 and she is the only survivor of the 1950s Honeymooners quartet. Jackie Gleason died on June 24, 1987 of colon cancer.  He was 71 years old.  Audrey Meadows passed away on February 3, 1996 at the age 73 after suffering from lung cancer.  Art Carney died in his sleep of natural causes on November 9, 2003 near his Connecticut home.  He was 85 at the time of his death.

Of her television husband Art Carney, Joyce told the Archive of American Television that "he's a very shy, quiet man.  You don't get to know Art right away at all - ever maybe  He's not as expansive as Jackie."  She also referred to him a "genius." and stated that she didn't think "Mr. Gleason would have gotten as far as he did without Art Carney."

* Joyce Randolph was not the original Thelma "Trixie" Norton.  Elaine Stitch played Trixie for one sketch on The Cavalcade of Stars before being replaced by Randolph. Stitch's Trixie had a background as a burlesque dancer at a theatre called Minsky's.

* Of her role as Trixie Norton, Joyce made the following statement to the Archive of American Television.

Trixie was married to a sewer worker and I guess she considered herself a little better than the character of Ed Norton. But she was just a housewife - she and Alice didn't have jobs. They stayed home all the time, which was kind of amazing, but the husbands didn't want them to work. But twice during the course of all of our years it was mentioned that probably Trixie had been in burlesque. They never expanded on that, but mention was made that she could have been a dancer in burlesque

* In the 1980s, the so-called "Lost Episodes" of The Honeymooners showed up on Shotime's pay-cable network.  The episodes were not actually lost.  The were Honeymooners sketches that had been originally broadcast in the 1950s. Jackie Gleason had released  kinescopes of the sketches to Viacom, Showtime's parent company.

* Joyce Randolph is the great-aunt of professional baseball pitcher Tim Redding. During his career, Redding, 35, has played for the Houston Astros, San Diego Padres, Washington Nationals, New York Yankees, New York Mets and my hometown Toronto Blue Jays.  He is currently pitching in the Mexican League.

* Joyce is a strong supporter of the United Service Organization (US0) which provides recreation and welfare-type services for American soldiers.  She is a member of its Board of Directors.

* Joyce has attributed her longevity and good health to vitamins and dietary supplements.  She's been taking Omega-3 fish oil for many years.


Editor's Update (January 31, 2014):  Jane Kean, who played Trixie Norton in a series of hour-long Honeymooners episodes on The Jackie Gleason Show from 1966-1970, passed away on November 26, 2013.  She died at the age of 90 in Burbank, California after complications from a fall that led to a stroke.