I've just started watching a DVD of the first season of My Three Sons starring Fred MacMurray as widowed patriarch Steve Douglas.  The long-running series was broadcast on ABC from 1960 to 1965 and on CBS from 1965 until 1972.  The show ran for 12 seasons and more than 360 episodes were produced. Why don't you test your knowledge of this series about the Douglas family.  Get ready and good luck!


My Three Sons Quiz and Trivia 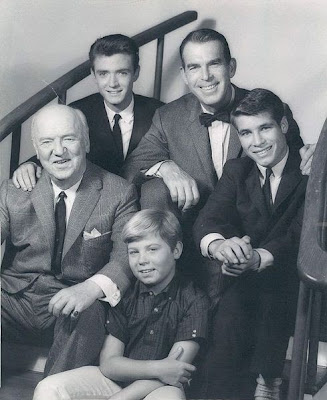 Note:  Above is a photo of the original cast of My Three Sons (Clockwise from left: William Frawley as Michael Francis "Bub" O'Casey, Tim Considine as Mike Douglas, Fred MacMurray as Steve Douglas, Don Grady as Robbie Douglas and Stanley Livingston as Chip Douglas.


1. The eldest of the Douglas sons was Mike, played by Tim Considine. When Considine left the show, his character married a woman named Sally Anne Morrison and the couple moved away.  Who played Sally?

A.  Its ratings had dropped on ABC.

B.  Fred MacMurray had some disagreements with ABC over the scripts.

C.  ABC refused to spend the money needed to produce the show in colour.

D. ABC was tired of the series and wanted to replace it with a fresher and newer show.

E.  ABC decided to move the show to a time slot that was less desirable to MacMurray and the other stars of the show.

4.  What did Fred MacMurray's character, Steve Douglas, do for a living?

A.  Steve Douglas was a lawyer.

B.  He was an aeronautical engineer.

C.  He was an architect.

D.  He was employed as an accountant.

E.  He was an insurance salesman.

5.  William Frawley, best known for his role of Fred Mertz on I Love Lucy, played the boys' maternal grandfather Michael Francis "Bub" O'Casey.  He lived with the family and served as housekeeper.  Frawley, however, left the show in 1965.  Why?

A. Frawley left My Three Sons because he was considered too ill to work.

B.  He decided it was time to retire from acting.

C.  He was not comfortable with the out-of-sequence filming method used on My Three Sons.

D.  He was tired of the show and had opportunities to perform on Broadway.

E.  He didn't think his "Bub" character was getting enough screen time.

6.  After eldest son Mike married Sally and moved away, the Douglas family adopted Ernie Thompson, an orphaned boy who had been moved from one foster home to another.  In real-life, the actor who played Ernie is related to one of the stars of the series.  Who is his relative?

A.  In real life, Ernie is Fred MacMurray's nephew.

B.  He is the grandson of William Frawley (Bub).

D.  He is the younger brother of Stanley Livingston (Chip Douglas).

E.  He is Tim Considine's cousin.

7.  What was the name of the fictional town where the Douglas family lived until 1967?

8.  After the Douglas family moved to California, Robbie married Katie Miller, a fellow college student.  They had triplets, all male.  What were the names of Robbie and Katie's three sons?

A.  The triplets were named Michael, Robert and Thomas

B.  James, Steven and Robert


9.  What was the name of the Douglas family dog?

10.  In 1969, Steve Douglas fell in love with Ernie's widowed school teacher, Barbara Harper, played by Beverly Garland and they were married during the season.  Barbara had a young daughter.  What was the name of her daughter?

11.  In 1970, Chip eloped with his college girlfriend, Polly Williams (Ronne Troup).  Why did they elope?

A.  They eloped because they couldn't afford a formal wedding.

B.  The couple had simple tastes and did not want a fancy wedding.

C. Their families thought they were too young to get married.

D.  Chip was drafted into the army and there was no time to plan a formal wedding.

E.  Polly wanted to get away from her strict father.

12.  By the final season of the series, Don Grady had decided to leave the show and his character was written out.  Robbie, a structural engineer, was sent to another country to work on the construction of a bridge. Where was Robbie Douglas sent?

13.  My Three Sons was originally supposed have another title.  What was it?

A.  The Fred MacMurray Show


The late Meredith MacRae played the role of Sally on My Three Sons.   In the first CBS episode entitled "The First Marriage" (Season 6, Episode 1, Air Date: September 16, 1965), Mike and Sally got married. and moved "east" so that Mike could accept a job as an assistant psychology instructor at a college.  In a later episode, they are said to be living in Arizona.  Trivia Note: "The First Marriage" was the first colour episode of My Three Sons and it marked Tim Considine's last appearance on the show.

Richard "Chip" Douglas was the third son of Steve Douglas and as a toddler, he pronounced his name "Chipper."  The character was portrayed by actor Stanley Livingston.  Livingston, born November 24, 1950, is now 62 years old.  After My Three Sons left the air, he became a producer and director in Los Angeles.

In 1968, at the age of 18, Stanley secretly married a go-go dancer named Sandra L. Gable.  The couple divorced in 1974 but the marriage produced one child, a daughter named Samantha.

My Three Sons moved to CBS for the 1964-65 because ABC was not willing to finance the series' switch from a black and white production to a colour production.

Steve Douglas was an aeronautical engineer.


When My Three Sons moved to the CBS television network for the 1965–66 season, along with the change in networks and the transition to colour, Desilu Studios deemed William Frawley too ill to work since the company was notified that it would be very expensive to insure him.  Frawley retained his role as Bub until he was replaced at midseason by veteran actor William Demarest.  Demarest had played Bub's curmudgeonly brother Charley part way through the 1964–65 season (the last on ABC).  The explanation for Bub's absence was that he had gone to Ireland to help his Auntie Kate celebrate her 104th birthday. Uncle Charley O'Casey later paid the Douglas family another visit and ended up staying as their housekeeper.  Bub never returned from Ireland.

On March 3, 1966, William Frawley collapsed of a heart attack while walking along Hollywood Boulevard after viewing a movie.  He died at the age of 79.


The Douglas family lived in the fictional American Midwest town of Bryant Park.  The state, however, was never identified.  In the fall of 1967, Steve Douglas moved the family to North Hollywood, California due to a job transfer.

The triplets were named Steven, Robert and Charles after grandfather Steve, father Robbie and Uncle Charley.  From 1970 until 1972, they were played by Joseph Todd (Steve Jr.), Daniel Todd (Robbie II) and Michael Todd (Charley Douglas).


The name of the Douglas family's sheepdog was Tramp.  If you are wondering about his breed, he was a Briard.  Tramp was played by a dog named Spud and owned by Frank Inn.  Another dog in the series was Wilson, Ernie's dog.

Chip and Polly eloped because Polly's disciplinarian father, Tom Williams (Norman Alden) did not approve of their relationship and Polly wanted to escape from his dominance (He even sent a private detective on their trail). After their honeymoon, the newlyweds moved into a college dormitory.

Robbie was sent off to Peru, leaving Katie and the triplets to live with the Douglas family until they could join him there.

The series was originally going to be called The Fred MacMurray Show but Fred himself objected to that title.

* Prior to his relationship with Sally Morrison, Mike Douglas (Tim Considine) dated Jean Pearson, played by Cynthia Pepper.  Jean was literally "the girl next door" as she and Mike were next door neighbours who opened their upstairs windows to speak to each other.  In 1961, Cynthia Pepper left My Three Sons to star in her own show, ABC's Margie.  In 1964, Cynthia made a guest appearance on an episode of My Three Sons entiteled "Goodbye Again (Season 5, Episode 9, Air Date: November 12, 1964). In the episode, Jean returns to Bryant Park hoping to connect with Mike again. Brother Robbie, however, tells her that Mike is engaged to Sally and she quickly leaves town.  Now 72 years old, Cynthia is retired and resides in Las Vegas, Nevada.


* Don Grady, who played Robbie Douglas, passed away on June 27, 2012 after a battle with cancer.  He died in Thousand Oaks, California at the age of 68.

* Fred MacMurray died on November 5, 1991 in Santa Monica California at the age of 83.  He had suffered from throat cancer in the late 1970s and a major stroke at Christmas 1988.

* Barry Livingston, born December 17. 1953, is now 59 years old.  He married Karen Huntsman in 1983 and they have two children, Spencer (born 1989) and Hailey (born 1992).  It was Barry who announced the death of  his co-star Don Grady on Facebook.  He wrote, "My dear friend and TV brother Don Grady passed away today.  He was an inspiration to me in so many ways."

* Tim Considine, born December 31, 1940, is now 72 years old.  After leaving My Three Sons, he became an automobile historian and a photo-journalist specializing in motor sports.  He is the author of The Photographic Dictionary of Soccer (1979), The Language of Sport (1982) and American Grand Prix Racing: A Century of Drivers and Cars (1997).  Considine has been married twice.  His first wife, whom he wed in 1965, was actress Charlotte Stewart.  Stewart is best recognized for her role as Miss Beadle, the school teacher on Little House on the Prairie.  She and Considine divorced in 1972.  Considine subsequently wed Willette Hunt in 1979 and they have one child, a son named Chris.  In early 2007, Chris Considine founded CXC Simulations, a company that describes itself on its website as "a high-tech engineering firm that has revolutionized the design and manufacture of advanced personal racing simulation equipment."
* William Demarest played the boys' Uncle Charley O'Casey, a gruff former Merchant Marine.  Demarest died of prostate cancer on December 28, 1983.  He was 91 years old.

* Beverly Garland died at her home in Hollywood on December 5, 2008.  The talented actress was 82 at the time of her death.  In the 1980s, she played the role of Kate Jackson's widowed mother, Dottie West, in the television series Scarecrow and Mrs. King.

* Ronne Troup, born June 10, 1945, is 68 years old now.  She is the daughter of musician/actor Bobby Troup.  In 1967, prior to her stint as Polly Williams Douglas on My Three Sons, Ronne was cast as Sister Bertrille in The Flying Nun.  When Sally Field, Columbia/Screen Gems' first choice for the role, became available, the studio dropped Troup and replaced her with Field.  Troup was 22 years old at the time. Given that Field is an Academy Awared-winning actress, one wonders how successful The Flying Nun would have been if Troup had remained in the lead role.

To watch a "Polly" montage featuring Ronne Troup, click on the link below.

* A 50th anniversary My Three Sons Reunion was held at the Paley Center for Media in Beverly Hills, California.on June 19, 2010.  All the surviving cast members were in attendance except for Don Grady who was undergoing cancer treatment in Europe and Dawn Lyn who was residing in Germany.