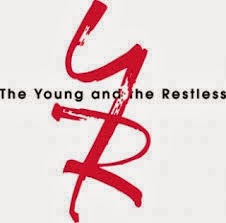 1.  Some violin music please!  This has been quite a melancholy time on The Young and the Gloomy with everyone grieving the death of 7-year-old Delia Abbott.  Both Billy and Chloe are absolutely distraught while poor Esther has taken to her room in utter despair.  Billy Boy has engaged in an interminably long bout of self-loathing.  He is closing himself off from the rest of the world, just as Nicholas did when Cassie died.  He is hitting the bottle and blaming himself for leaving his daughter unattended in the car.  Chloe, meanwhile, has been focussing all her pain and anger on Billy, adding to his guilt.  It seems to me that the most cool-headed and mature person of the bunch has been Kevin Fisher.  Kevin is grieving too, but he has told Chloe to stop playing the blame game. He has wisely pointed out that pointing fingers will not bring Delia back.  I have to say that I am impressed with Kevin's good judgment, a rarity for him.  Fisher has never been known to be a paragon of wisdom.

As for all the grieving, I know the death of Delia was a tragedy but the show has been downright depressing lately.  Could we have some lighter moments soon?

2.  So Fenmore Baldwin has stepped up and confessed that he was the one who took the life of oily bartender Carmine Basco, who stalked Lauren and her family.  Is he telling the truth, though, or just trying to take the rap for his father, prominent Genoa City attorney Michael Baldwin?  Michael, who admitted to the murder in order to prevent Fen from going to prison, was sentenced to ten years in the slammer. I'm still scratching my head trying to figure this one out.  If neither Michael nor Fen actually committed the deed, then who did?  I can't think of anyone else with a motive for killing Carmine unless his connection with the mob (remember gangster Angelo and his daughter?) did him in.  I don't really think that's the answer but I also find it hard to fathom that Fen really killed someone in cold blood.  The teenager doesn't remember what happened because he was in a drug-induced haze at the time.  So why is he insisting that he killed Basco?

3.  I don't know about you, fans, but I find it difficult to accept Devon's new status as Genoa City's latest billionaire.  Yes, I know it's a soap and it was done for storyline purposes but I don't think it's plausible that Mrs. Chancellor would have left Devon all that loot.  Sure, he is her grandson and she would definitely have bequeathed him something substantial in her will, but the wealthy socialite was much closer to others than to Devon.  It would have been far more believable if she had left him her treasured vinyl record collection and a large sum of money - but not billions. That's so contrived and unrealistic.  Yet, as we all know, soaps are not known for their realism.

Didn't you just love that Abbott press conference and the way Devon stepped up to offer a one million dollar reward for information leading to thee capture of the driver who ran down Delia.  By the way, whatever happened to Devon's girlfriend, Roxanne?  Don't you think she would be aware that he is now a billionaire? Where are you, Roxy baby?

4.  How about Genoa City's dynamic law and order duo, Paul Williams and Christine (also known as Cricket or, as Phyllis likes to call her, The Bug)!  Law enforcement is certainly in good hands in G.C. with those two in charge.  Only in a soap would Paul Williams become chief of police.  He was a private investigator, never a police officer. He was also arrested for the murder of his own son, Ricky Williams.  In real life, it is highly unlikely that anyone with that background would become chief of police.

Speaking of Paul Williams, how many of you remember that there is a fourth Williams sibling besides Paul, Father Todd Williams and the mentally ill Patty Williams.  His name is Steve Williams and he has not been mentioned for years.  He is a journalist who moved to Washington, D.C. a long time ago.  Perhaps, in the future, if the writers are searching for a new storyline, they'll have him return to town.

5.  I have consulted a longtime Y&R viewer, Helen from Scarborough, Ontario for some comments on the latest happenings in Genoa City.  Helen had a few observations about the show that I'd like to pass along to you.  Here they are.

Why did Billy go to an ice cream parlour in such a remote place?  Why was the ice cream store located so far off the beaten track?  How could the shop attract customers in the middle of nowhere?

Now that Paul Williams and the Cricketmeister are married, isn't there a conflict of interest with him being police chief and her being the District Attorney?  They were both involved in the sentencing of Michael Baldwin.for Carmine's murder.

Carmine may have committed suicide because he was cornered and did not want to return to prison.

Well, Helen, I doubt that Carmine killed himself.  He loved himself too much and was very egotistical.

6.  It was wonderful to see the return of Ashley Abbott (Eileen Davidson).  I hope Eileen's return is not just temporary.  It would be great to see back on Y&R on a permanent basis.  I also have to say that Ashley looked very lovely in her red dress.  If the late John Abbott had been there, he surely would have called her "my beauty" as he used to do.

This week, Ashley and the Abbotts (sounds like the name of a band) stood united in their determination to help Billy Boy.  It's always great when the show centres on its core families.  The Abbott clan even tried  to recreate its traditional Abbott breakfast. Alas, it was not the same without the strong presence of John Abbott and Mamie serving her delicious cinnamon buns? Why did the writers have to kill off John Abbott anyway?

7.  The walls are closing in on the Black Sheep, Adam Newman.  It's only a matter of time, especially now that Victor knows he burned something (Delia's scarf) in the fireplace.  Although Adam has certainly been no angel, I think he has also been misunderstood and maltreated by the other Newmans.  He never intended to run over Delia and he sincerely wants to be a good father to baby Connor.  When it is discovered that he was driving the vehicle that killed Delia, he is going to become the most hated person in Genoa City.

No matter what he does, Adam is never going to please Big Daddy Victor.  He's intelligent enough and has enough business acumen to run his own successful company.  Why doesn't he just do it.  He could even go into partnership with Jack Abbott.

What do you think of Billy Boy Abbott's short haircut?  I give it thumbs down.  I prefer it longer with a more wave.

Have you noticed that since Paul Williams became chief of police, he is dressing less casually.  He has started to wear suits and ties, as befits his lofty new position.

Melody Thomas Scott (Nikki Newman) will appear in Canada this weekend and also on the first weekend of November.  Here is her schedule.

On Sunday, October 27, she will visit the 13th Annual West Coast Women's Show in Vancouver. B.C. The event will take place at the TRADEX: Trade and Exhibition Centre in Abbotsford.

On Sunday, November 3rd, Melody will be attending the National Women's Show in Toronto.  She will appear on centre stage at the Metro Toronto Convention Centre at 1:30 p.m.

Email ThisBlogThis!Share to TwitterShare to FacebookShare to Pinterest
Labels: vehicl