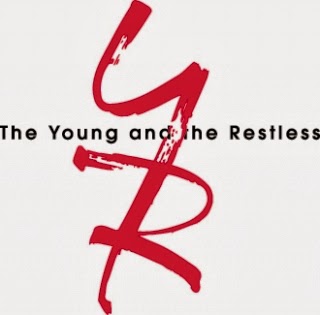 
It won't be long, I think, until Phyllis finally awakens from her coma.  On the latest cover of CBS Soaps, there is a headline about Y&R getting set to recast the role.  It seems almost certain that Michelle Stafford will not be returning, although I will not completely rule out the possibility.  Now that Nick and Sharon have gotten together again, Phyllis has to come between them by revealing Sharon's secret.

So Reed Hellstrom, son of Victoria Newman and ex-husband J.T. Hellstrom, came for a visit to Genoa City. Reed was born on December 3, 2007, which makes him six years old.  A regular viewer, Helen from Scarborough, Ontario, thinks he always looks about the same age.  Perhaps that because soaps age children so quickly to give them a storyline.  To put this in perspective, Summer Newman was born on December 19, 2006.  However, Summer is now a 19-year-old on the show while Reed is still a child.  I guess they haven't given Reed the Soap Rapid Aging Formula (SRAF) yet.

I've read Jeanne Cooper's (Katherine Chancellor) 2012 memoir, Not Young, Still Restless.  In the book, Jeanne refers to some wise words from Y&R creator Bill Bell about keeping a soap successful .  She quotes Bell as having said, "You do not kill off your core characters, and you do not let your core families disintegrate."  I wish the current powers that be at The Young and the Restless would heed Bell's sage advice.

In my opinion, the show has gone downhill ever since they killed office the patriarch of the Abbott family, John Abbott, portrayed by Jerry Douglas.  Jeanne denounced the 2006 decision to have John die of a stroke (Bell, who died on April 29, 2005, was gone when the mistake was made).

Jerry still appears sporadically as John Abbott's ghost, dispensing advice to son Jack. In effect, he serves as Jack's conscience.  Yet, it's not the same.  Here's what Jeanne Cooper wrote in her autobiography.

And believe me, if a vote were taken on the set today among the actors who've been on Y&R for any length of time at all, the Abbott family would be sitting down to breakfast at their long-lost dining room table again right this very minute.

Avery seems to be quite a cook, doesn't she.  I guess she's Genoa City's own Martha Stewart.  Of course, the busy lawyer still finds time to do some home cooking despite the trials and tribulations of her personal life.  Boy, some women can do it all, can't they!  Proud boyfriend Dylan entered one of her recipes in a contest and it won, naturally.

How did you like energetic Hilary on The Price is Right?  Do you think CBS was trying to promote another of it's shows.  Nah.  It couldn't be.

Where does one find a "too good to be true Dylan" and who will be the first to find Adam - Clueless Paul Wiiliams or Vindictive Victor?


Here's the latest from our friend CC from Etobicoke.  Note: CC's comments are in italics, followed by my responses.

Y&R's ratings are down and a website ran an exclusive that executive producer Jill Farren Phelps is trying to get Susan Lucci to join the cast.  If you can believe the sleazy tabloid Globe Magazine, Phelps has apparently made an offer to Lucci to come on board.

Dylan is definitely a semi-keeper but he seems to be holding back somehow especially with Avery.  His heart is not in it.

Well, CC, it seems to me that Dylan and Avery are quite happy right now. That means the writers will find something to come between them.

Nikki and Victor are living in another rocky marriage phase.  Isn't this at least the 2nd if not third anniversary trip she is not going to go on?

Victor does dangle a lot of gifts, especially jewellery and trips, in front of her.  In fact, it's gotten to the point where she's so nonchalant about Victor's expensive presents that she looks rather bored by them.

Why would Neil choose sour Lesley over the perky, mysterious but evil Hilary?  Anyway, when did he become such a 'til death do us part' fan?
He threw Sofia out the door at the first opportunity.

Yes, CC, I think Neil can be quite hypocritical at times.  Not only did he dump Sophia unceremoniously, he also dumped his second wife, Karen, very abruptly.  He used Sophia and treated Karen terribly.  The man's matrimonial track record has not been good.  He seemed truly happy with Drucilla, though.

Was shocked but grateful to hear that actress playing Chloe is leaving the show.  I hope she takes Kevin with her and they settle somewhere far away from Genoa City so they cannot come back for a visit.

I'm not a fan of the Chloe character and frankly I'm not disappointed that Elizabeth Hendrickson is leaving the show.  I'm waiting to find out if the character will be recast.  As for Kevin, I like him better since he sold the coffee shop to Dylan.

Right now it looks like the writers are tossing all the main male and female characters up in the air and when they land we will see who is with whom!


I agree.  The reason the writers made Sharon undergo shock treatment was that she would forget the secret she is hiding from Nick.  Once Nick learns the truth (and he will, of course), they are doomed as a couple. Chelsea is in limbo until the situation with Adam becomes clearer and some fans think she may eventually get
together with Handyman Dylan again.  As for Billy and Victoria, they were too happy so the writers had to break them up, at least temporarily.  Unfortunately, Y&R made a huge mistake in allowing Billy Miller to go.
It's not clear yet whether a new actress will be taking over the role of Chloe or whether the character will just be written out.  If Elizabeth Hendrickson is not replaced, then Kevin will be matched up with someone else. I'm trying to figure out who it might be.  As for Noah and Courtney, they just seem to be drifting.  Nothing much is happening in that storyline.  What will happen between Jack and Phyllis once Phyllis comes out of her coma?  Will she go after Nick again when she discovers he is no longer with Avery.  If she remembers what Sharon did, she will undoubtedly use the information to break up Nick and Sharon.

Y&R has sent out a casting call for the roll of Aaron Newton, who's described as mid to late 30s and a charming businessman.  Hmmm  . . . That sounds quite a bit like Adam, doesn't it?

Gloria's dreamboat, Alex Chavez (played by Ignacio Serricchio), will return to Genoa City, after being on assignment.

VICTOR:  Jack's always been a poor judge of character.

JACK:  How can you say that, Victor?  I've always been right about you!


That's all for now.  Coming up on the show will be the debut of the new Kelly, Cady McClain, and the Jabot fashion show.  The next Y&R Report will appear in this space on Saturday, April 12.