For Robin Williams, it started with Mork and Mindy 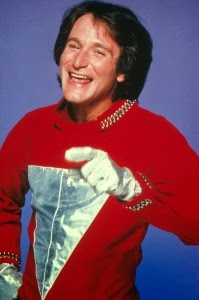 The best tribute to (Robin) Williams's skill, though it's not his best project by a long shot, is Mork and Mindy.  That show  never should have worked, or even existed; it happened because Happy Days did a completely ridiculous episode about Richie and the Fonz meeting a space alien.  But the alien was Williams, and he was so funny that he'd practically earned his own spinoff by the time the cast was taking bows.


The recent death of Robin Williams stunned and saddened many people around the world.  As a tribute to the actor/comedian, I decided to write about the television comedy that made him a star - Mork and Mindy. Mork and Mindy was a spinoff of Happy Days, as was Laverne and Shirley, Blansky's Beauties, Out of the Blue and Joanie Loves Chachi.  The Happy Days episode that spawned Mork and Mindy is entitled "My Favorite Orkan" (Season 5, Episode 22, Air Date: February 28, 1978).

The premise of that Happy Days episode sounds patently absurd.  After all, who would expect a comical alien to appear to the Cunningham family of Milwaukee,Wisconsin during the late 1950s?   "My Favorite Orkan"  is a take-off on the early 1960s sitcom My Favoritre Martian, starring Bill Bixby and Ray Walston.  The episode, in which the alien lands on Earth and attempts to kidnap Richie Cunningham (Ron Howard), would have been a disaster if a lesser talent than Williams had played the role of the extraterrestrial.  It might have been as infamous as the episode in which Fonzie jumps a shark.

Robin McLaurin  Williams was born in Chicago, Illinois on July 21, 1951.  After studying theatre at the Juilliard School in New York City, he worked as a stand-up comedian in San Francisco and Los Angeles during the mid-1970s.  His television career began in 1977 when he appeared in a Laugh-In revival and became a member of the cast of a short-lived variety series, The Richard Pryor Show.  That same year, he played a small role in an episode of Eight is Enough entitled "The Return of Auntie V (Season 2, Episode 12, Air Date: November 30 1977)

In 1978, Robin Williams was 26 years old and largely unknown when Happy Days creator Garry Marshall cast him in the role of Mork from Ork.  His performance in "My Favorite Orkan" made such an impact that he literally became a star overnight.  He was a whirling dervish, spewing one-liners with rapid-fire delivery Filmmaker Brian Levant, who became a Happy Days writer/producer in the show's fifth season, made the following remarks about the episode to E! News.

It was Robin Williams’ literal birth as an entertainer.  He was an unqualified genius in that rehearsal and the cast of Happy Days was tremendously generous ceding the stage to him and everybody walked out of that show saying ‘spin-off, spin-off, spin-off.’ And we walked upstairs and wrote a bunch of great stuff.

The spin-off, of course, was Mork and Mindy.  It was created as a vehicle for Robin Williams' comedic talent, and it ran for four seasons on the ABC network, from 1978 until 1982.  The series chronicled the adventures of Mork from the planet Ork who came to Earth in a tiny egg-shaped spaceship. The series was not set in 1950s Milwaukee but in present-day Boulder, Colorado.  It co-starred Pam Dawber as Mindy McConnell, his human friend and eventual love interest.  Mindy was a clerk at a music store run by her father, Frederick (Conrad Janis).  She befriended Mork and allowed him to stay in the attic of her home.


Mork, a misfit on his own planet, was sent to Earth to observe human customs and behaviour.  At the end of every episode, he reported back to his Orkan leader, Orson.  Orson was never seen on screen, but the character was voiced by Ralph James.  James, who passed away in 1992, did voice work for Looney Tunes cartoons and Pink Panther animated shorts.  He also provided the voice for Mr. Turtle in the Tootsie Pop commercials of the 1970s.

Mork's attire consisted of a red and silver space jumpsuit or a striped sweater with rainbow-coloured suspenders.  After reporting to his boss, Orson, he would tug his his ears and sign off with the words "na nu, na nu," meaning both hello and goodbye in the Orkan language.  Due to the popularity of the show, "na nu, na nu" became a catchphrase along with "shazbot," another alien word used by Mork.  The term "shazbot" has also been used by aliens in The Simpsons and is generally defined as a euphemism to express disappointment or substitute for a curse-word.

In the autumn of 1981, Mork and Mindy were married.  They honeymooned on the planet Ork, which was inhabited by outlandish creatures.  Not long after, Mork gave birth by ejecting an egg from his naval.  When the egg cracked open, a fully grown Jonathan Winters emerged!  Winters, by the way, was Robin Williams' inspiration and model as a comedian.

Mork and Mindy named their bizarre offspring Mearth.  Although Mearth appeared middle-aged, he babbled like a baby, uttering gibberish.  By this time, the series was losing popularity and experiencing low ratings.  At the end of four seasons, it was cancelled.

Robin Williams, of course, went on to delight audiences in such films as Dead Poets Society, Mrs Doubtfire, Good Morning, Vietnam and Patch Adams.  He proved himself to be not only a great comedian but a fine dramatic actor, winning an Academy Award for Best Supporting Actor for his performance as Sean Mguire, a psychiatrist in Good Will Hunting (1997).  Sadly, on August 11, 2014, Robin was found dead at his California home, the victim of a suicide.  Upon his death, Henry Winkler the Fonz himself, shared this memory of his initial reaction to the frenetic comedian :

Here I am playing this man of very few words and I’m watching brilliance explode like fireworks every 10 or 15 seconds… This young man (Robin Williams) comes in and we started rehearsing and I quickly realized I had one job: to keep a straight face. What ever you said, he inhaled out of the air and then threw it back at you. There was not one time it came out the same. There was not one time it was not truly, endlessly and fervently funny. You saw it and your mouth dropped. You couldn’t believe it. I’ve worked with a lot of people and there is and was no one quite like him.