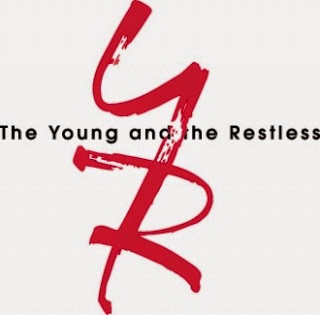 Hey Y&R fans, every second Saturday TV Banter discusses the latest happenings and provides commentary on your favourite daytime drama. Note to U.S. readers - SPOILER ALERT:  Here in Canada, I watch the show on Global TV which is one episode ahead of CBS.  I will inevitably refer to incidents you haven't seen yet. Read at your own risk.  If you are the curious type, though, you may prefer to discover some things in advance.


The walls are closing in on Genoa City's own Dr. Delicious, as Chelsea's mother, Anita, referred to the not-so-good Dr. Stitch.  The truth has finally come out and Stitch 'em Up is sweating bullets.  "Dr. Ben Rayburn" is a fake and a fraud.  His real name is actually Ben Russell and he stole Rayburn's identity.  Not only that, but he killed his own father.

What's poor Princess Victoria to do?  She's in a real quandary She doesn't trust either Stitch or Billy Boy Abbott.  Daddy Victor refers to Billy as a punk and a playboy.  He's not good enough for the royal princess. However, Victor is impressed with the phony Dr. Rayburn because he is a war hero and a fine upstanding doctor.who saves lives.  The only problem is he killed his own father.  But wait . . . maybe  there's more to the story.  Maybe Stitch confessed to the crime in order to protect someone else . . .  his mother perhaps?

I don't know about you, but I find Mariah's crush on Nicholas Newman very creepy. After all. she is the spitting image of Cassie, who was Nick's adopted daughter.  I still think Mariah is Cassie's twin sister and that Sharon is actually her mother.  My guess is that Ian Ward took Mariah away from Sharon and that Sharon never knew that she had given birth to twins.  The woman that Mariah thinks is her biological mother is not.


From Patsy in Sarasota, Florida:


It is so unbelievable that Billionaire Devon who is driving his very expensive automobile does not have Auto Club to help out stranded drivers. Even General Motors has OnStar assist.

You are absolutely right, Patsy.  Not only that, but why weren't either Devon's or Hillary's cell phones working?  I know that soaps can't be expected to be completely realistic, but REALLY!!!!!  How many coincidences can we be expected to endure?

Fifi in Collingwood, Ontario thinks it's ridiculous how fast both Paul Williams and Dylan McAvoy recovered so quickly form life-threatening conditions.  I strongly concur, Fifi. Paul was near death's door after being shot, and Dylan had a severe infection after donating part of his liver to save his father. Now the two of them are in the pink, running around as if they'd just recovered from nothing more serious than the flu. Once again, fans, if you want realism, you're not going to find it on daytime drama. However, I don't think people watch soaps because they want realism.

There's some good news for Shemar Moore fans.  Moore, who played Malcolm Winters on The Young and the Restless, before landing a role on the hit series Criminal Minds, is returning to the soap for two episodes on September 10 and September 11 (CBS) and September 9 and September 10 on Global TV in Canada. The actor has not been seen on Y&R for nine years.  Darius McCrary played the role of Malcolm from December 2009 until October 2011.

Shemar Moore is a Daytime Emmy winner and his brief return to Genoa City means that his Malcolm character will be able to tie up some loose ends.  We'll find out what he's been doing for almost two years and if he will be able to mend his relationship with his brother Neil (Kristoff St. John) and the rest of the Winters clan.

Although Shemar's return is only temporary, fans can still watch him on Criminal Minds, which will begin its tenth season this fall.


According to TV Guide, there will be a special two-day remembrance of Mrs.Chancellor on August 26 and 27 (CBS) and August 25 and 26 (Global TV). Tricia Cast (Nina Webster) and Michael Fairman (Murphy) will return for the episodes.

Argentine actor Ignacio Serricchio, Detective Alejandro "Alex" Chavez, has not appeared Y&R since he landed a role on Bones.  At the moment, Detecteve Harding is doing Chavez's job.  However, Chavez was mentioned on the Friday, August 1, 2014 episode on Global.  It was stated that he had left town, but nothing was said about whether he would return.  Gloria will certainly be happy if and when he comes back. By the way, I have not heard or read any news about Serricchio's status on the show.


WHATEVER HAPPENED TO . . . JULIANNA McCARTHY?

Julianna McCarthy, who played matriarch Liz Foster on the Y&R, is an original cast member from 1973. Julianna was born in Erie, Pennsylvania on August 17, 1929 and she will soon celebrate her 85th birthday. From 1953 until 1969, she was married to actor Michael Constantine (Constantine, 87, is best known for his roles as Seymour Kaufman, the high school  principal on Room 222 and the Greek father in My Big Fat Greek Wedding).  Julianna and Michael had two children, a son named Brendan Constantine and a daughter named Thea Constantine.

From 1973 to 1982, Julianna starred as Liz Foster, mother of William "Snapper" Foster, Greg Foster and Jill Foster.  She reprised her role as Liz in 1984, 1985-86, 1993, 2003-4 and 2008.  She made her final appearance in the role in June of 2010. During those years, her character was living in London, England with son "Snapper" and daughter-in-law Chris.  In 2010, Liz returned to Genoa City one last time and died in hospital.  Before her death, she revealed the identity of Jill's biological parents (Jill grew up not knowing that she had been adopted by the Fosters.  Longtime fans will remember that Liz was Mrs. Chancellor's housekeeper before Esther arrived on the scene.

To watch a 2011 video of Julianna reading poetry, click on the link below.

The always humble Nicholas Newman made the following remark to Mariah:

NICK:  I'm super fun.  I'm fairly easy on the eyes and my personality is legendary.