Whatever happened to Louise Lasser? 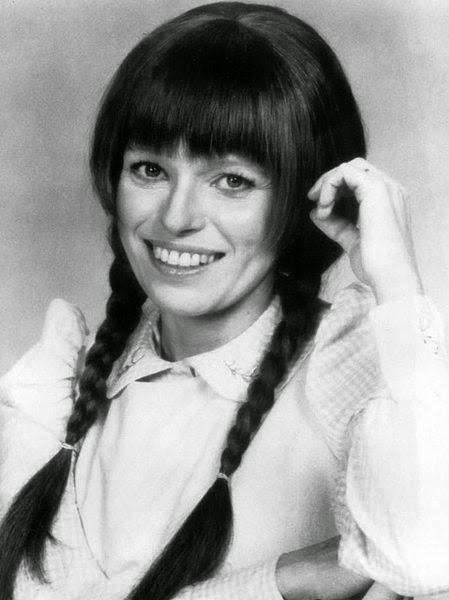 Remember those pigtails and bangs?  That spaced-out Orphan Annie stare?  That doll-like dress with the puffed sleeves?  Now, concentrate for a moment!  Close your eyes and harken back to the year 1976 . . . The United States is celebrating it's Bicentennial, and Rocky, starring Sylvester Stallone, is lighting up the silver screen. One of the hottest shows on American television is a late-night soap opera parody about a neurotic housewife named Mary Hartman, played by Louise Lasser.

Louise Lasser was born on April 11, 1939 in New York City, the only child of S. Jay Lasser, a tax specialist, and his wife, Paula.  She was raised Jewish.  In a December 20, 2013 interview, she told freelance writer Claire Barliant that she was "one of those Jews who sort of denied her heritage because I didn’t look it, no one thought I was Jewish, and only really recently in the last year or so have I found myself incorporating, feeling lucky I had that background."

Louise attended Brandeis University in Waltham, Massachusetts (near Boston), where she studied political science.  After three years, she took a "psychological leave of absence," as she told People magazine.  She asked her father to come and bring her home.  After returning to New York, she studied acting with well known instructor Sanford Meisner whose approach is known as the Meisner technique.

Louise's parents eventually divorced and her mother later committed suicide.  Of her parents, she told Claire Barliant the following:

I was brought up by a woman who was incredibly interesting and had very profound depression. It was kind of what I knew. I didn’t know other people’s parents. When I’d get to see them, I thought, they’re so different. But I didn’t want those. I actually liked mine. I thought mine were more interesting

Louise herself has battled depression for years. Here's how she described first encounter with her own mental problems in her interview with Barliant.

In the early 1960s, Louise sang in Greenwich Village coffee shops and bars.  The aspiring actress performed in improvisational revues and eventually on Broadway. In fact, she was Barbra Streisand's understudy as Miss Marmelstein in the musical I Can Get it for You Wholesale.

Prior to achieving stardom with Mary Hartman, Mary Hartman, Louise appeared in a string of guest roles on television during the early and mid-1970s.  She turned up on such comedies as Love American Style (1971), The Bob Newhart Show (1972) and Mary Tyler Moore (1973).  Lasser's acting range, however, was not limited to comedies.  Her credits also include dramas such as McCloud (1974) and Medical Center (1975).

Mary Hartman, Mary Hartman, was created by Norman Lear of All in the Family fame. It was a syndicated series and it ran for only two seasons, ending in 1977. Yet, it took the television world by storm.  Louise Lasser soon became a household name, appearing on the covers of magazines such as Rolling Stone, People and TV Guide.  The series was described as a "kitchen-sink theater of the absurd" in People.

Mary Hartman, Mary Hartman was somewhat surreal, very offbeat, and a biting satire of American consumer society.  In essence, it was an attack on commercial television itself.  Its heroine, Mary, constantly chattered about certain cleaning products or different types of coffee.  That is why Joan Darling, Mary Hartman, Mary Hartman's director, contends that show's fundamental thesis is that "television would make us a nation of empty dead people" - Mary Hartman-type zombies.

When Lear started the project in 1975, according to Mary Hartman head writer Ann Marcus, Louise was reluctant to do a soap.  However, the part of Mary had been written with one person in mind - Louise Lasser.

Louise Lasser was Mary Hartman i.e. Mary Hartman filtered through Louise's brilliant, fractured psyche. And Louise had more to do with creating the character than any of us. It was Louise who gave Mary that blank stare; that slow, earnest, deliberate way of speaking. She even invented her wardrobe: the puffy-sleeved little girl/housewife mini dress; the braided hairdo and bangs. And no, that wasn't her real hair. She kept her brown hair tightly bobby-pinned underneath a reddish blond wig.


In addition to Louise, the cast of Mary Hartman, Marty Hartman consisted of the following:

Mary Kay Place who played Mary's best friend, aspiring country singer Loretta Haggers and Graham Jarvis who played Loretta's balding, bespectacled, husband, Charlie Haggers.  On their way to Nashville to kickstart Loretta's career, the Haggers were involved in a car accident in which they hit a station wagon full of nuns.

Bruce Solomon who played Sgt. Dennis Foley, a Fernwood police officer who was enamoured of Mary.  She eventually ran off with him.  After Mary's departure, Tom fell for a woman named Eleanor Major, played by Shelley Fabares.

Although the series was set in the fictional town of Fernwood, Ohio, Mary Hartman spoke with a New York accent.  The show was satiric and filled with dark humour. Mary, for example, was deeply troubled by the waxy yellow build-up on her floor, and Leroy Fedders, Tom's basketball coach, drowsy from cold medicine, nodded off and accidentally drowned in her chicken soup.

The first season ended with Mary Hartman having a nervous breakdown, a total meltdown.  The breakdown was sparked by an incident involving a dollhouse in which Mary refuses to leave a shop until the owners allow her to purchase a dollhouse for her daughter, Heather.

The crack-up was Louise's idea and she presented it to Norman Lear.  She once stated that she wrote "a twelve-page paper on how Mary's nervous breakdown was really America's breakdown."  "Mary," she proclaimed, "personified America." Perhaps there is some truth to that.  Maybe Mary's breakdown was a reflection of a post-Watergate meltdown in the United States.

In the spring of 1976, Louise was arrested in a Beverly Hills cocaine bust.  As a result of the charges, she was placed on a six-month probation program, which she satisfied by continuing treatment with her therapist. On July 24, 1976, just weeks after being booked for possession of cocaine, a troubled Louise hosted NBC's Saturday Night Live. It was the final episode of SNL's first season and it turned out to be disaster for producer Lorne Michaels.  Louise's behaviour was erratic throughout rehearsal week, and she was very difficult to work with.  Her performance throughout the broadcast was uneven and almost incoherent.  Michaels was so upset that he banned her from ever hosting Saturday Night Live again.

In 1977, after two seasons and 325 episodes, Louise Lasser chose to leave Mary Hartman, Mary Hartman.. She was unhappy with the direction the show had taken during the second year, and filming five episodes a week was very tiring and grinding.  After she left, the series was renamed Fernwood Forever and continued for 28 more weeks.

Of her character, Mary Hartman, Lasser has remarked: "Mary is me - I mean, she's who I would be if I had grown up in a small town and married my high school sweetheart and become a housewife instead of growing up in the big city and becoming an actress and marrying a genius."  That "genius" is none other than famed actor and filmmaker Woody Allen.

Louise was Allen's second wife and they were wed on February 2, 1966.  After almost four years of marriage, they split amicably, divorcing in January of 1970.  Woody cast her in three of his films - most memorably as Nancy in Bananas (1971),   She also appeared as Kay Lewis in Allen;s Take the Money and Run (1969) and as Gina in his Everything you Always Wanted to Know About Sex *But Were Afraid to Ask (1972)  In addition, she had a brief cameo in Stardust Memories (1980).

Lasser has never remarried.  She and Allen did not have any children.

After Mary Hartman, Mary Hartman, Louise was cast in a recurring role on It's a Living, a comedy about five waitresses working at an upscale Los Angeles restaurant. For 14 episodes, from 1981 to 1982, she portrayed Maggie McBurney on the series. During the 1980s, she also made guest appearances on Taxi (three episodes between 1980 and 1982), Laverne and Shirley (1982) and St. Elsewhere (two episodes in 1984).

Louise Lasser was absent from television for most of the 1990s, although she did portray Louise Polsky in a 1992 episode of the sitcom Empty Nest.  The episode is entitled "Good Neighbor Harry" (Episode 4, Season 22, Air Date: March 22, 1992). In 2009, she had an uncredited cameo role as an attendee at a science fiction convention in an episode of CSI: Crime Scene Investigation ("Space Oddity," Season 9, Episode 20, Air Date: April 16, 2009).

In March of this year, Louise appeared in two episodes of HBO's comedy/drama Girls. about a group of 20-something women.  She played the role of Beadie, a disabled artist in a wheelchair. 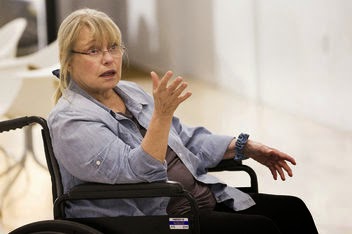 Now 75 years old, Louise lives in an apartment on the Upper East Side of Manhattan.  She is an acting instructor at HB Studio.