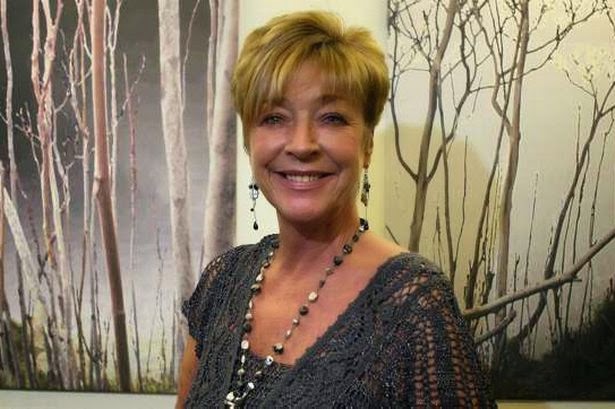 For me working on Coronation Street can be soul destroying - It's punishing.  It can be long hours doing the same thing over and over again.  You think you’ve died and gone to hell.


In spite of her words, Anne Kirkbride, devoted 42 years of her life to Coronation Street and appeared in 1,439 episodes of the long-running British serial.  She had no intention of quitting the show.  "I never dreamed I’d be a TV star, she remarked to the Daily Mirror in 2012.  “But despite what I feel about the daily grind of Corrie (Coronation Street), I am safe there. I am totally institutionalized and I’d actually be terrified to leave.  It is stable and that is one of the reasons I have stayed so long. I can come home every night, do my housework, do my washing up and lead a normal life."

The 60-year-old passed away in a Manchester hospital on January 19, 2015 after a short and secret battle with breast cancer.  On September 29, 2014, it was announced that she would take a three month break from the show.  Not long after, her co-star, Marc Baylis, who portrays Rob Donovan, told the Daily Mirror that his colleague was exhausted from the strain of months of intense filming for two important storylines. Sadly, the actress was never able to return to her role on the venerable ITV soap.  Her final scenes aired on October 8, 2014.

Anne was born in Oldham, Lancashire, England on June 21, 1954, the daughter of cartoonist Jack Kirkbride of the Oldham Evening Chronicle and his wife Enid (nee Kirkham).  She graduated from Counthill Grammar School, Oldham in 1970 and then became a member of the Oldham Repertory Theatre as an assistant stage manager, eventually moving on to acting roles.

The aspiring actress was only 17 when the producers of Coronation Street offered her the part of Deidre Hunter, a flirtatious teenager.  At the time, her only television appearance had been as the girlfriend of a footballer (soccer player) in the Jack Rosenthal play Sweet Sunday and Sweet FA. Nevertheless, on November 20, 1972, the fresh-faced 18-year-old  made her debut on the show the Brits affectionately refer to as "Corrie."

Anne's character, Deidre, soon caught the imagination of "Corrie" fans.  They enjoyed watching her on-screen exploits and she became known for her humongous spectacles, her husky voice and her dubious culinary skills.  Off screen, however, Anne wore contacts rather than glasses.  The husky voice was the result of her heavy smoking habit.


Viewers faithfully followed Deidre every torment and her every triumph.  In 1983, they were captivated by a love triangle involving Deidre, her husband, Ken Barlow (Bill Roache), and the opportunistic Mike Baldwin (Johnny Briggs). When Deidre finally chose Ken, the news was flashed on screens during a Manchester United game at venerable Old Trafford.  The crowd cheered heartily when they read the words "Ken and Deidre reunited.  Ken 1- Mike 0" 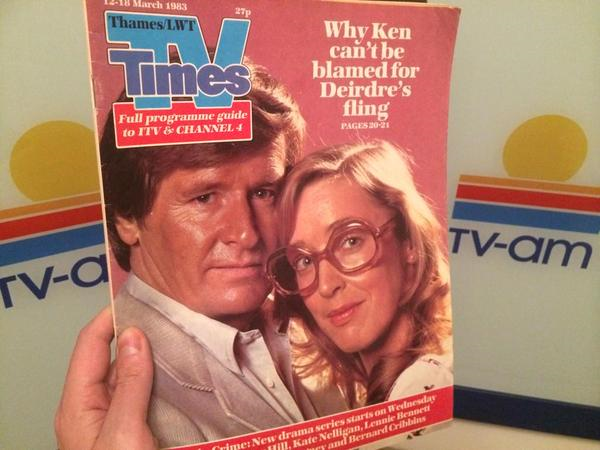 Viewers also became engrossed in Deirdre's romances.  Over the years, the character was wed four times, twice to Ken Barlow.  She first wed builder Ray Langton (Neville Buswell) in 1975 after being employed as his secretary. The couple had a daughter named Tracy, but Ray's roving eye destroyed the marriage.  They divorced and Deidre became a single mother while Ray immigrated to The Netherlands.  Ken Barlow was Deidre's second husband and the couple tied the knot in 1981, during the same week as Prince Charles and Lady Diana Spencer.  Seven years later, they split after Ken became involved with his secretary Wendy Crozier. Deidre then married for a third time to a much younger Moroccan waiter, Samir Rachid (Al Nedjari),, whom she met while on holiday.  Rachid, however, was mugged and murdered by thugs.  After his death, Deidre reunited with Ken and they remarried  in 2005.

How popular was Deidre with Coronation Street viewers?  Well, consider this.  In 1998 there was a storyline in which the character was imprisoned after being tricked into a mortgage and credit card fraud by her unscrupulous fiance Jon Lindsay.  Fans were so taken by the wrongful accusation against Deidre that a mock campaign was launched in her support.  Newspapers doled out "Free Deidre" stickers and t-ships and the movement was even endorsed by then-British Prime Minister Tony Blair who jokingly pledged to review the case.

In 1992 Anne Kirkbride wed fellow actor David Beckett, whom she met on the set of Coronation Street.  Beckett portrayed Dave Barton, Deidre's handyman boyfriend, for a time on the show.  In 1993, a year after her marriage to Beckett, Anne was diagnosed with non-Hodgkin's lymphoma (lymph cancer of the neck).  Due to chemotherapy, she lost most of her hair and returned to work wearing a wig. She managed to overcome her illness but there were more trials and tribulations ahead. Her beloved mother, Edith, had died of cancer at the same time that Anne discovered her non-Hodgkin's lymphona.  It was a very traumatic time and she fell into a severe depression.


In Deidre and Me, a 2012 biographical documentary celebrating Anne's 40th year on Coronation Street, the actress revealed that during her 1998 appearance on This Is Your Life, she had been high on Valium.  She admitted that she had been taking a steady dose of anti-depressants since her cancer diagnosis and that she had had suicidal thoughts. Of her depression, she remarked: "'It was worse than the cancer in a way because that was going to be over. I knew it was bad but I knew at the end of it I was going to be better.  But this . . . this was just so frightening."  With psychiatric counselling and anti-depressants, however, she was able to find a new lease on life.

Despite the long hours and the gruelling work she put into the show, Anne was immensely grateful for her role on Coronation Street.  In Deidre and Me, she expressed her gratitude.  "It's given me my lovely David, my husband, and I'm incredibly grateful to the Street for that," she declared.  "I never had a desire to go off for this part of that, or do Shakespeare. I'm fortunate that Deidre can get into pretty well any situation and so I've had plenty of scope and some great stories."

* According to her obituary in The Guardian, Anne Kirkbride was an avid photographer and painter, especially of scenes around her holiday home in Spain.  Exhibitions of her works were held at galleries in Didsbury, Lancashire, where she resided.  That's not surprising since both her cartoonist father and her photographer great-grandfather had artistic talent.

* Bill Roache, Anne's TV spouse Ken Barlow, returned to Coronation Street last year after being cleared of rape and indecent assault charges.  During the investigation and month-long trial, the veteran actor was written out of the show.  He pleaded not guilty to all charges and was acquitted by a jury.  As a witness in support of Roache. Anne described her on-screen husband in glowing terms.  She said he was "lovely" and a "perfect gentleman."

Recently, at Britain's National Television Awards. Bill paid tribute to Anne.  He talked about how the British people had taken her into their hearts. In an emotional speech, he said, "As Deirdre and Ken, we were soulmates.  And despite what was thrown at us we found one another and always made our way back together.


It is interesting to note that the 82-year-old Roache (born April 25, 1932) has appeared on Coronation Street since its very first episode on December 9, 1960. He is currently listed in the Guinness World Records as the longest serving living TV actor in a continuous role.  In 2010, he surpassed the record of Don Hastings who played Dr. Bob Hughes for 50 years (1960-2010) on the defunct American soap As the World Turns.

* Anne and her husband, David, never had any children.  She told the Daily Mirror that she'd never had "that overwhelming need that some women have" to be a mother.  "I don’t think I ever heard the biological clock ­ticking. I love babies and I adore kids. I’ve always had them in my life. When my nephews were babies I was very hands-on and I fed and bathed them.  She and David, however, were "very happy with their cat."

* In addition to her husband, Anne is survived by her brother John, his wife Jac and their children.