I don't know about you, but Y&R head writer Charles Pratt has my head spinning with the show's numerous twists and turns and unexpected happenings.  There are too many unanswered questions too and too many things hanging in the air.  For one thing, hurry up and let Chelsea find out the truth about Gabe's true identity! Many fans are waiting to see Chelsea and Adam reunite and I guess the writers are trying to milk it for all it's worth.  Gabe/Adam always seems about to tell her but doesn't. We are being teased, fans.

Regular readers will recall that in the last edition of Y&R Report, there was a poll asking Y&R viewers to indicate whether they think Chelsea should go back to Adam once she learns that he is still alive.  The overwhelming majority of respondents (83% the last time I checked) want her to reunite with Adam, while only 13% think she should remain with Billy Boy Abbot.  Perhaps the reason is that Billy (as portrayed by Burgess Jenkins) and Chelsea don't have much chemistry.

The Genoa City armoire murderer has claimed another victim.  GC police officer Courtney Sloane was killed on her wedding day and this time I think the victim is really dead.  Courtney was never a major character and she was completely expendable.  While Noah Newman grieved over his murdered bride, the Supergirl Summer certainly got over the deaths of both her husband and best friend rather quickly with the help of Kyle Abbott.

Y&R seems to be making a habit of featuring weddings that don't happen.  Avery left Nick Newman at the altar.  Then Nick's remarriage to Sharon was disrupted by the unexpected appearance of Phyllis.  Noah's wedding is the latest one that didn't happen.  Jack and Phyllis are planning to get married next.  I didn't think that would ever come about.  It hasn't happened yet, though.  Perhaps Kelly will show up to stop that wedding too.

What's with Dr.Stitch 'em Up?  Is he losing his ardour for Victoria?  The passion seems to be flaming out rather soon.  He seems indifferent to her these days even though she is supposed to be the love of his life.  I always thought the not-so-good doctor had a roving eye.  Next on his list is Abby.  Regular viewers have seen that one coming for a long time.

Although I understand that Lauren and Michael need a storyline, I'm not impressed with the one they've been given.  Why would Michael try to set his wife up with Cane, a married man with two children?  It was very creepy to see Michael spying on the two of them.  He's been a favourite character of mine and I don't enjoy seeing him behave so pathetically.  Michael has always been such a feisty and vibrant character.  Why are the writers making him give up without a fight?  It's sad to see him so deflated, a shadow of his former self.  I know!  I know!  It's to create a storyline.  Do they have to compromise the integrity of a good character, though?

Does anyone have a more smarmy smile than Joe Clark? (Didn't his mother ever tell him to wipe that smirk off his face?)  He just flashes his pearly whites to charm the women. Wishy-washy Avery has been falling for it, even though she is a seemingly intelligent lawyer.  Other than Avery, who really believes that Joe has transformed himself as a great philanthropist and do-goodered.  It's so obvious that he is doing charitable work to impress his ex-wife and win her back.  He's discovered Avery's Achilles' Heel.  He knows she has a soft spot for the underdog and he's using it to her advantage while Dylan's spending all his time rescuing Sharon.

Revisiting Ashley's long ago storyline about her not being John Abbott's biological daughter is a smart move on the part of the writers.  John passed away without ever knowing the truth about his "beautiful Ashley," and the issue has been dormant for years.  Now it has surfaced again, with great flashbacks connecting the past to the present.  That storyline works, unlike the other incident from the past concerning Nick and the swimmer who injured herself at his party.  The incident was never mentioned before and seems contrived.  There are no flashbacks to link it to the present.  It is also difficult to believe that Sharon and Nick would not have discussed it or referred to it at some time.

Here are some thoughts from Rosie from Richmond Hill, Ontario:


As for Y&R, a couple theories as to who may be in the confessional are Kelly's mother, or even Ashley. Also into the 'murderer' mix could be the cop who gives Kevin a hard time. I can't remember what his name is. He was at odds with Courtney and even Abby, from what I can remember.

I agree about Stitch and Abby (getting together). Victoria will need to reunite with Billy, especially when the truth about Adam comes out and Chelsea gets back with him. There's no chemistry I feel with Chelsea and Billy.

Joe Clark could end up with any of those three ladies.  I can see him with Lauren and Lily as well.

I think Dylan and Sharon will be a couple before long. There are definitely a lot of twists and turns going on, so it's hard to say what will transpire.

Yes, Rosie, the person in the confessional could be Kelly's mother, Maureen. However, I doubt very much that it's Ashley.  Why would she be working with Victor to help him take over her company? There is a strong possibility that Kelly is the one who has been secretly meeting The Moustache in the confessional.  She is likely still alive and eager to get revenge on the Abbotts.  That would explain the finger prints.  Perhaps Kelly's fingerprints have been switched with those of a real dead person so that she would be identified as the deceased.  Kelly may also have been the one making the mysterious phone calls to Jack, just to disturb him. Remember that Victor ordered the person making the calls to stop.

As for the murderer, I don't think that Mark Harding, the cop who gives Kevin a difficult time, is guilty.  What's happened to Detective Harding anyway?  It appears that head writer Chuck Pratt doesn't have much use for him because he seems to have disappeared since Pratt took over.  He's vanished just like Alex Chavez. Speaking of characters who don't seem to be around very much anymore, where are Esther and Gloria?

As I mentioned above, I too think there is a lack of chemistry between Chelsea and Billy Abbott.  It looks as if  Billy will be reconciling with Victoria again anyway.  Too bad Billy Miller isn't playing the role anymore!  He had much better chemistry with Victoria (Amelia Heinle).

I also think that Sharon and Dylan will eventually be a couple, at least temporarily.  However, it probably won't happen until Sharon is cleared of the murders of Austin and Courtney.

Yes, Smarmy Joe is definitely a ladies' man.  He could end up with Avery, Lauren or Lily.  They all have a certain attraction to him.

Regular contributor, CC from Etobicoke, has sent in her latest thoughts:


Who's the guilty one? or should it be two?
I hope it won't be too anticlimactic when we find out.
As with many murders it goes back to motive and sociopathic personality tendencies.
That means it could be one of several people in GC.
I have to hand it to them as I did not see today's (Thursday April 9th on Global) shocking event coming. (Joe Clark's fall from the window after Avery tried to stop him from kissing her.
Stay tuned.

Yes indeed, CC.  There could be two people working together, for example Austin (assuming he's still alive) and Ian Ward.  Ian's a psychopath and Austin absolutely despises the Newmans and the Abbotts, as does slippery Ian.

Sharon is not the guilty party and she is obviously being framed.  That means there is going to be a big dramatic scene in which Clueless Genoa City police chief Paul Williams mistakenly arrests the beleaguered blond.  Leave it to Clueless to bungle up another case.  Meanwhile the real killer remains on the loose.

I did not see Joe Clark's fall coming either, CC.  It was completely unexpected, a shocking turn of events.  However, I expect him to recover under the care of a guilty Nurse Avery. 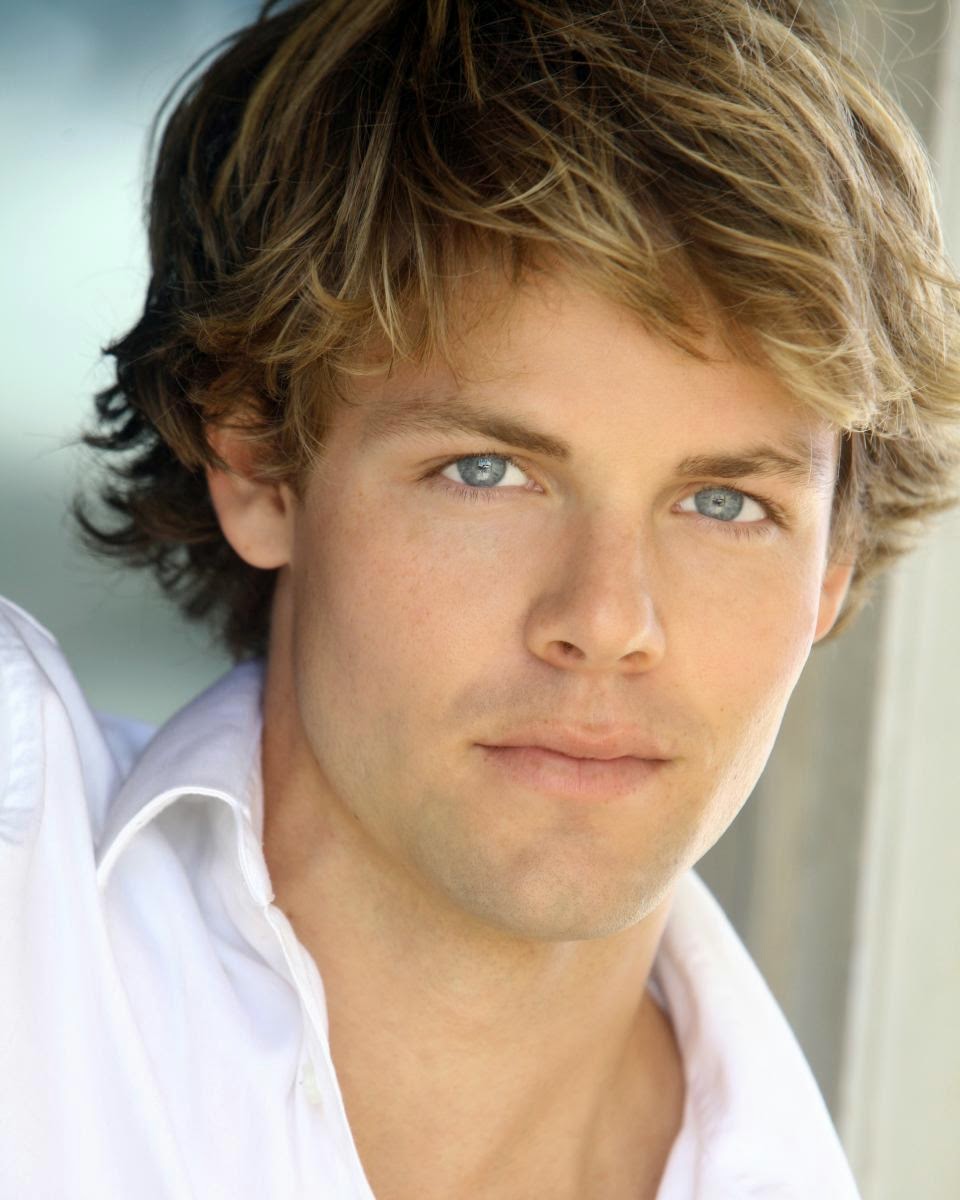 The new Kyle is a baby-faced Australian named Lachlan Buchanan.  How do you like him so far?


What is your impression of the new Kyle Abbott, Lachlan Buchanan?

That's all for now. Don't forget that the next edition of Y&R Report will appear in this space on Saturday, April 25, 2015.