Okay, fans, I just have to get this out of my system!  I beg your indulgence as I rant about the ridiculous turn of events on the show.  What were the writers thinking when they decided that Jack Abbott should have a lookalike or an evil twin. We fans are not stupid and we certainly do not appreciate having are intelligence insulted.

Stories involving lookalikes and long-lost twins appear regularly on soaps. However, The Young and Restless has gone down that road so often that viewers can only shake their heads, rolls their eyes and shout, "Please, not again!"  Here are some examples:  The late Cassie Newman had a twin sister named Mariah; Cane Ashby had an evil twin brother named Caleb who was shot to death on the steps of a church; Patty Williams had a lookalike psychiatrist who had a romance with Jack Abbott.  At one point, Lauren had a lookalike, as did Katherine Chancellor. Remember, Marge, the waitress who was the spitting image of  the wealthy socialite?  Hasn't that been enough?  Do we really need a double dose of Jack too? Can't the writers be more creative and original?  Have they run out of new ideas?  I don't expect reality from soaps, but I do expect fresh ideas.

Yes, I know "the two Jacks" have gotten tongues wagging. I also realize that head writer Charles Pratt's seems intent on getting the attention of viewers, but is that the only thing that matters?  Pratt should be aware that he's playing with fire.  In the long-run, he risks alienating show's most loyal viewers. Those viewers like to be surprised, but they also care about the characters whose trials and tribulations they have been following for years.  The integrity of the show is important and the fans want to be treated with respect.  They don't want to be patronized.


Well, it's all over for "Stitchoria!"  Dr.Ben Rayburn (or Russell) and Princess Victoria Newman have thrown in the towel on their relationship, at least for the time being. We could all see that coming and it certainly didn't take ladies' man Stitch'em up to hook up with another overprivileged Newman heiress, namely Abby. He certainly didn't very long to get over his break-up with Victoria.  He was kissing the spoiled blonde in the blink of an eye.

Speaking of Victoria Newman, she can be just like her daddy Victor at times.  Did you notice the smug smile on Victor's little girl when Ashley Abbott was informed that Victoria would be her boss? She could be barely contain her joy at the prospect of her former stepmother reporting to her.

From Rosie from Richmond Hill

The writers on Y&R are trying to do too much, and yes, it's totally unrealistic with the two Jacks thrown into the mix.  I missed a couple of episodes this week  Have they revealed who Victor's partner in crime is?  I imagine it's the new Jack, but who the heck is this person?

It will be interesting to see the ladies duke it out for Stitch.  I think Victoria will gravitate to Billy naturally, so Ashley and Abby will be in competition with one another.  OOh la la.  Looks like it's going to be "Shylan" as the new power couple before long.

I wholeheartedly agree, Rosie.  The writers are definitely trying to do too much.  It's fine to try to pick up the pace of the show a bit.  It's fine to have some cliffhangers and plot twists, but within boundaries.  No one expects reality from soaps.  Viewers accept that certain liberties have to be taken for the sake of drama and to create storylines.  However, there has not be a limit, a line that should never be crossed. With the Jack stoyline, the writers have crossed that line.  It is so far-fetched that it is laughable.

Yes, Jack's confessional box conspirator is the false Jack Abbott. This fake Jack or "Fack" was apparently discovered in a prison in Peru.  It has not yet been revealed whether he is an identical twin or has undergone cosmetic surgery to resemble the cosmetics executive. Peter Bergman, who plays Jack, is portraying two characters for the first time in his soap career.  Bergman told TV Guide that he does not suspect that the fake Jack is an identical twin, though he is not absolutely certain of that.  "I think he is quite literally a doppelganger, that lookalike we all supposedly have walking around the planet somewhere.  We're going to find out that he's been in a lot of trouble and is kind of a loose canon."

Yes, there's going to be some "Stitchmania."  Abby and Ashley will certainly fight over Stitch (not that he's worth it in my books).  Victoria does seem to be turning back to Billy Boy. (Too bad Billy Miller is not playing the part anymore).  I must say, The Black Knight will be quite dismayed if his Princess returns to the "punk and the playboy." Good! I'm sick and tired of seeing Victor have everything go his way.

OOH la la!  It certainly does look like it's going to be "Shylan." It's just a matter of time before Sharon and Dylan get together, at least temporarily.  Sharon always has to have a man to come to her rescue, doesn't she.  If Nick were available, she would be with him. Dylan is there for Sharon now, though.  However, I don't think they will ever be a "power couple" such as Nikki and Victor.

From CC from Etobicoke, Ontario

The Jack storyline is so ridiculous!
And of course Victor is behind it all.
Kyle and the murders are linked to it all somehow.
I'm not liking Kelly or Phyllis these days.
Glad to see Nick got his summer buzz cut.  He was looking a little scruffy.


Yes, CC, the Jack storyline is ridiculous.  There may not be any link between that storyline and the murders.  I think Kyle has been behaving in quite an obnoxious manner, but that dosesn't mean he's a murderer.  However, with Charles Pratt as head writer, one never knows.

Kelly is difficult to like these days because of her storyline.  As for Phyllis, it's hard to fathom that she could be duped by a fake Jack.  She is too smart for that.  She would be able to tell that something is way off kilter (Another reason why the "double Jack" storyline is so absurd.

I noticed that Nick was looking a little scruffy too. He looks much better now. Neil needs to follow Nick's example.  He's looking scruffy too.  However, it may be on purpose as part of his appearance as an alcoholic.

From Chiara from Thunder Bay, Ontario

Here are some commentary notes:

The scene with Kelly seducing poor Jack after she hit him over the head with a bat reminded me of Misery, the movie with Kathy Bates.  Can't the writers be a little bit more original?  Where did Jack's twin get his makeover?  The same plastic surgeon as Adam?

It's a situation where Y&R should hire Angela Lansbury (as Victor Newman's sister) to solve the mysteries!

Maybe they will reveal that Jack's "twin" got his makeover from the same plastic surgeon as Adam. These days, Chiara, I wouldn't put anything past the writers.

Angela Lansbury is 89 years old now, but she's still wowing audiences with her stage performances.  If she ever has a desire to return to television, you have come up with the perfect part for her.  Charles Pratt would love it.  It would fit right in with his style of writing. She could play Victor's long-lost older sister, even though he's never mentioned having one.

Helen from Scarborough, Ontario asks: How come the board of Jabot Cosmetics had the power to vote Jack Abbott out as CEO but didn't have the authority to block the merger between Jabot and Newman Enterprises?

Helen doesn't like the "two Jacks" storyline either and wonders why Peter Bergman and Eric Braeden do not complain about it.  Surely they must have some input, Helen thinks.  In his interview with TV Guide, Bergman didn't express any strong objections to his current storyline.

Fifi from Collingwood, Ontario has come up with some very thoughtful analysis. She thinks that Sage is bad news.  So do I.  We actually know very little about Sage other than she was very loyal to Constance and the whole Bingham family.  She told Chelsea that the real Gabriel Bingham was the love of her life.  Maybe she's just bad news and will bring Nick down.  On the other hand, she could be a suspect in the murders.  Her motive could be revenge on the Newman family because Victor caused Gabriel's father to commit suicide.  She could even be connected with Ian Ward and his cult in some way.  Of course, this is all conjecture.  It's just a theory, but there could be some truth to it.

Fifi also pointed out that Adam will probably be the one to figure out that Jack is a fake.  The real Jack is the only person, other than Sage, who knows that Adam is still alive and has had plastic surgery to look like Gabriel Bingham.

Baby on way for Y&R star 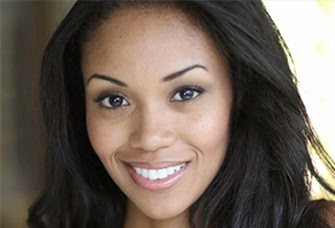 Congratulations to Mishael Morgan (Hilary Curtis Wnters)!  Soap Opera Digest has reported that Mishael and her husband are expecting their first child in August. According to SOD, the pregnancy will not be written into Hilary's storyline. However, Mishael will have to take a maternity leave and her character's absence will have to be explained.  Perhaps Hilary will leave town for a while. Another option would be to have another actress play the role during Mishael's absence.

By the way, Mishael will be flying home to Toronto, Canada in May for a baby showery.  She told Soaps in Depth that she doesn't know the sex of the baby yet, but that it will be revealed at the party. "The only person that knows right now is my baker, who is baking me a cake," she said.. "Inside it's going to tell me whether it's a girl or a boy, so when we cut the cake at the baby shower, we'll all find out together!


After breaking up with Victoria Newman, Dr. Stitch ran into Abby at the bar at the Genoa City Athletic Club.  It didn't take long for those two to lock lips.

What do you think of the recent pairing of Stitch and Abby?

That's all for now.  I'd like to remind you that the Daytime Emmys ceremonies will take place tomorrow, April 26, 2015.  Y&R has many nominations.  Unfortunately for Canadian fans, the show will not be televised here.  The May Sweeps are coming up.  Don't forget that the next edition of
Y&R Report will appear in this space on Saturday, May 9, 2015.