We are in the midst of the May ratings sweeps.  However, I don't find Y&R's storylines very compelling right now.  After moving along at a fast pace earlier in the year, the show seems to be dragging at the moment.  I wish that snake-in-the-grass Ian Ward would return soon.  He''d certainly shake things up.

Victor Newman is a wealthy criminal.  Yet, despite his nefarious activities, he commands a great deal of admiration and respect in Genoa City.  Every time he makes a request, the response is "Yes, Mr. Newman.  Right away, Mr. Newman." That's not really surprising because he buys a lot of people with his money. What is surprising is the amount of respect Victor receives from Clueless Paul Williams. When Victor phoned to inform the police that Sharon had broken the rules of her house arrest by attending the party at Nick's restaurant, Paul exclaimed that "Victor Newman himself" had made the call.  Well, so what?  Paul Williams, as chief of police, is expected to uphold the law. Victor Newman is a crooked businessman who breaks the law whenever it suits his purposes.  He thinks he is above the law.  Paul should not speak of Victor with such reverence in his voice.  He also should not have taken so long to exonerate Sharon of the murders.  It was only after Christine (a.k.a. the Cricketmeister) recognized Sharon's innocence that she was cleared of the crimes.

Meanwhile, Vile Victor's latest criminal activity is forgery.  He is concerned that the Jabot/Newman merger will be invalid since Jack has not signed the agreement yet.so he wants to have Jack's signature forged on the documents.  He's even dragged Neil Winters involved Neil into the scheme, as well as his wife Nikki.  As if Neil and Nikki, both alcoholics, don't have enough problems already! It's about time Victor faced some real consequences for his actions.  I'm sick and tired of him coming out on top all the time.

Gwen is back and she's getting involved with Neil.  Is he just using her to get revenge on Devon and Hilary somehow?

After the Billy and Chelsea wedding fiasco, I think the next wedding on Y&R should involve a couple who really want to get married.  The most recent weddings on the show have all been farces. Most of them have been rushed affairs interrupted with the bride or groom left at the altar.  In the case of Noah and Courtney, the bride was murdered.

As regular readers of Y&R Report know, I like to call Y&R characters by their nicknams.  Victor Newman, of course, has a classic list of nicknames given to him by Jack Abbott.  Through the years, Jack has referred to his nemesis as "The Black Knight". "Moneybags," "The Moustache," and "Mr. Mumbles." Billy has recently taken to referring to Victor as "Snidely."  My own contribution is "The Big Man" and "Vile Victor."

Victor always refers to Billy Abbot as Billy Boy.  During an argument between Billy and Neil Winters, Neil said, "Get your facts right, Billy-Bob."

I received some negative feedback on the two Jacks storyline from regular viewer Fifi in Collingwood, Ontario.  Fifi told me that she fast forwards the scenes between Kelly and Jack.  I definitely agree with Fifi.  One Jack Abbott is enough.  I hope the kidnapping scenes end soon.  I thought the fake Jack was going to die from his injuries in the car accident with Kyle.  I can't wait for the real Jack to get away from Kelly.

Having said that, I do like the storyline of Victor taking over Jabot.  I just wish they could have done that without having a Jack look

Rumours are rife on the Internet that Christian LeBlanc will soon be leaving Genoa City for Port Charles, where General Hospital is set.  LeBlanc is good friends with Michelle Stafford, Y&R's former Phyllis.  Stafford left The Young and the Restless and  eventually joined the cast of General Hospital.  Fans are wondering if Christian LeBlanc is planning to follow suit.

General Hospital seems be making quite a habit of scooping up Y&R stars such as Stafford and Billy Miller, Y&R's ex-Billy Abbott.  It would be a real coup for GH  if Christian LeBlanc joins the growing list.  It could very well happen, too.  His Michael Baldwin character has been battling cancer and may soon shuffle off this mortal coil. All I can say is that Y&R's loss will be General Hospital's gain if LeBlanc jumps ship.  He is a Daytime Emmy-winning actor and Y&R can ill afford to lose performers of such high quality.

Note to Y&R fans in Toronto, Canada: Christian LeBlanc will appear at the casino at the Woodbine Racetrack on Sunday, May 10, 2015.from 1 p.m. until 3 p.m,

Y&R at the Daytime Emmys

The Daytime Emmys were awarded on April 26, 2015. Y&R won for Best Drama Series in a tie with Days of Our Lives.  Amelia Heinle (Victoria Newman) received an Emmy for Outstanding Supporting Actress, Hunter King (Summer Newman) won for Outstanding Younger Actress (she is 21 years old).

I have just learned some sad news about a former Young and Restless star. Longtime viewers will remember Victoria Mallory, the second actress to portray concert pianist Leslie Brooks (The original Leslie Brooks was Janice Lynde who left the show in 1977).  Mallory, who portrayed Leslie from 1977 until 1984, died of pancreatic cancer on August 30, 2014 at the age of 64.  The veteran Broadway star is survived by her husband, actor Mark Lambert, and daughter Ramona Mallory Lambert (known professionally as Ramona Mallory).  Ramona is also an actress.

A new character will be arriving in Geona City soon.  Soap Opera Digest reported that Moroccan-born actress Sofia Pernas has been cast in the recurring role of Marisa.  Marisa is described as "a mysterious beauty" and there has been speculation that the character will interact with several major characters on the show.  Pernas makes her Y&R debut on Monday, June 1, 2015 on CBS (Friday, May 29, 2015 on Global TV in Canada).


Chris McKenna will return to the screen as Detective Mark Harding on Tuesday, June 2, 2015 on CBS (Monday, June 1 on Global TV),  Frankly, I don't consider Harding to be a very likable character.  However, viewers don't know all that much about his personal life since he's only been a minor character.  His return obviously has some connection to the Austin/Courtney murders. 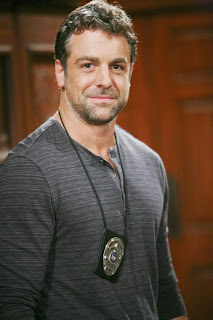