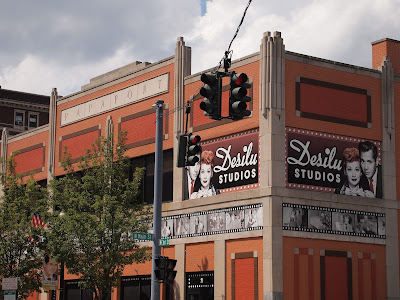 As an ardent fan of  Lucille Ball's comedy, I've wanted to visit her hometown of Jamestown, New York for a long time.  Jamestown, where the great comedian was born on August 6, 1911, is located 112.7 kilometres (70 miles) southwest of Buffalo. It is about 3 hours or less from Toronto, Pittsburgh and Cleveland.

Well folks, this summer I finally made the trip.  On Wednesday, August 19, 2015, I toured the Desilu Studios and the Lucille Ball Desi Arnaz Museum in the city of Lucy's birth.  It is my pleasure to share some photos of my experience with TV Banter readers and fellow Lucy fans. 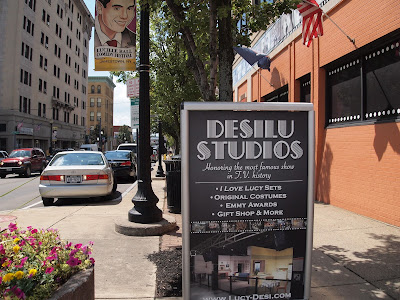 Among the many items on display at Deslu Studios is some of the clothing that Lucille Ball wore on I Love Lucy, including her polka dot dress and her maid's outfit. You can also see the saxophone Lucy played.on the show. 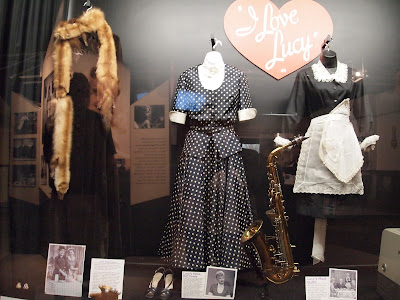 Here is a photo of some other items used on the show. 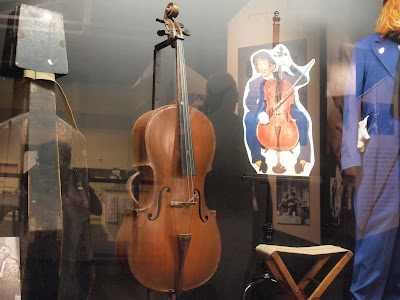 The Desilu Playhouse features a re-creation of the living room of Lucy and Ricky Ricardo's New York apartment . . . 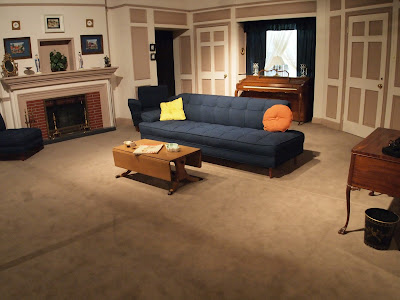 . . . and a re-creation of the kitchen of Lucy and Ricky Ricardo's apartment. 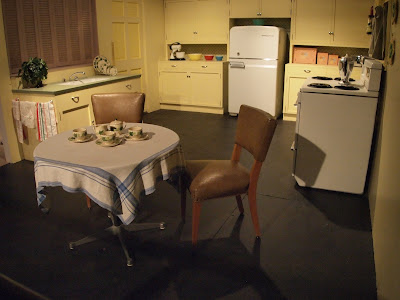 Below is a photo of a display case containing Lucy's Emmy Awards. 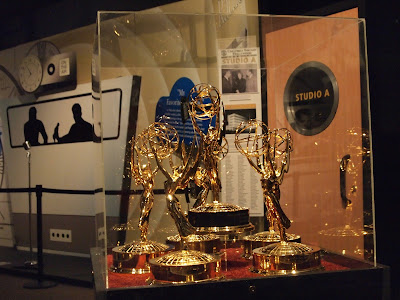 Lucille Ball appeared on the cover of TV Guide a remarkable 36 times. 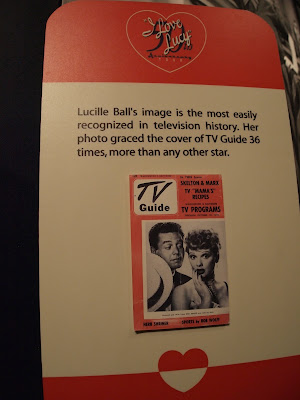 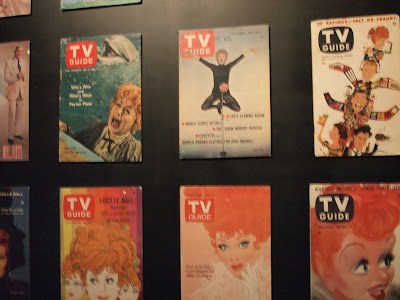 There is also a re-creation of the suite at the fictional Beverly Palms Hotel, where Lucy and Ricky Ricardo stayed when they went to Hollywood during Season 5 of I Love Lucy in 1955. 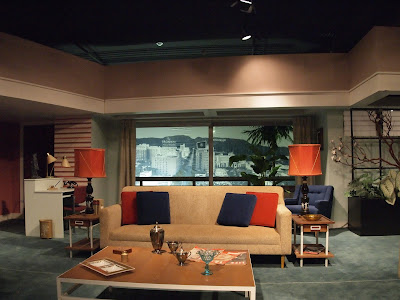 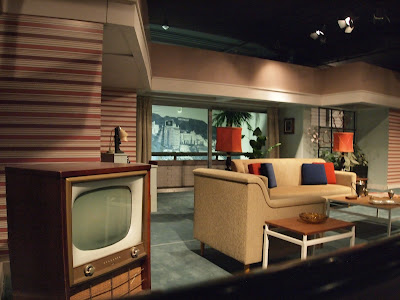 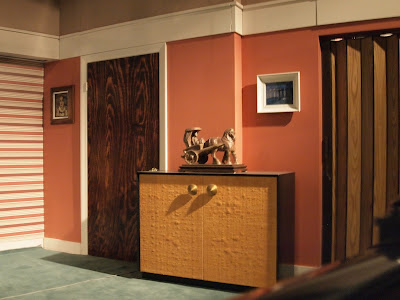 One of the most popular episodes of I Love Lucy is "Lucy Does a TV Commercial." In this classic 1952 episode, Lucy advertises a medicine called "Vitameatavegamin." She believes that the product contains vitamins. minerals and vegetables.  What she doesn't know is that it has an alcohol level of 23 per cent.

At Desilu Studios, there is a re-creation of the setting where Lucy gives herself spoonfuls of "Vitameatavegamin."  Visitors can stand behind the table, hold up the bottle and read the exact words Lucy speaks in the commercial 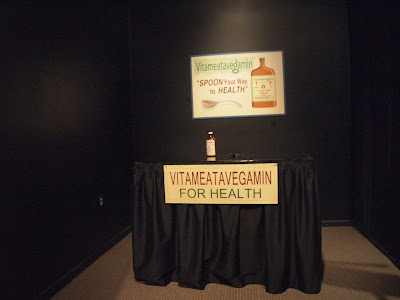 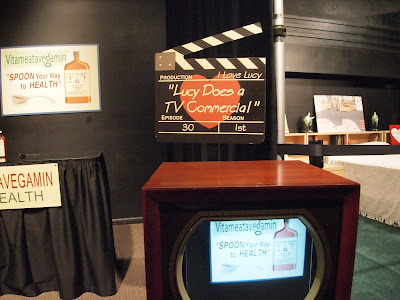 There is an extensive collection of Lucy dolls on display. 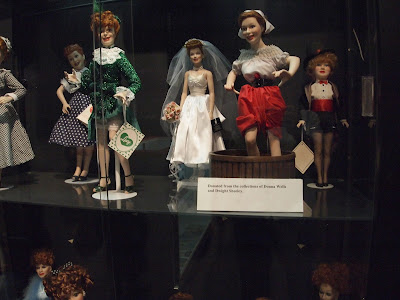 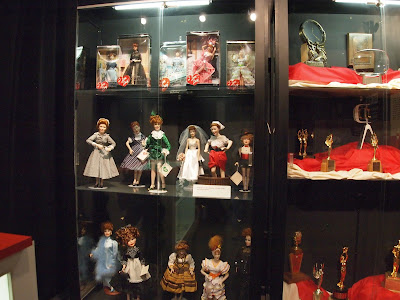 Right beside the Desilu Studios is the Lucille Ball Desi Arnaz Museum.  Due to the contributions of their children, Lucie Arnaz and Desi Arnaz, Jr., the museum has tripled in size since 2008.  It features an audio tour narrated by Lucie Arnaz and contains the personal belongings of Lucille Ball and and Desi Arnaz - letters, costumes, gowns, photographs, scripts and awards.  It also traces the family history of Lucy and Desi and the rise of their careers. 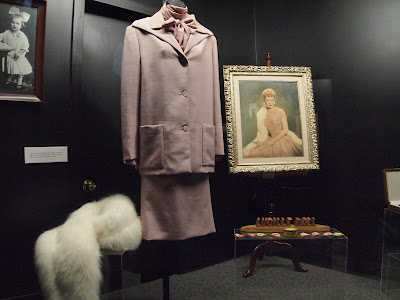 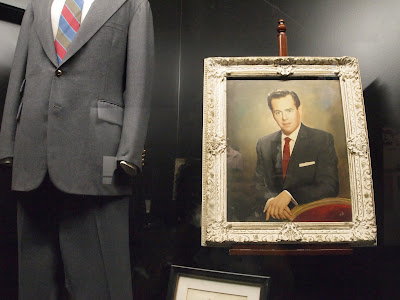 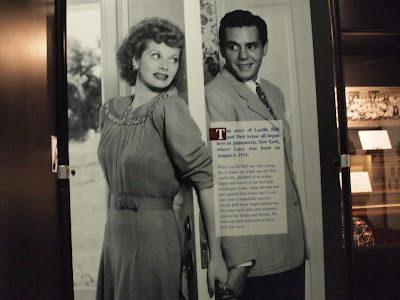 Lucy's legacy can be seen throughout her hometown.  Take a close look at the building in the background of the photo of Jamestown below.  There is an I Love Lucy mural of the structure.  The full-colour mural depicts the well-known scene in which Lucy, Ricky and Fred and Ethel Mertz drive to Hollywood.  There are other Lucy murals in the city and they are the work of local artists. 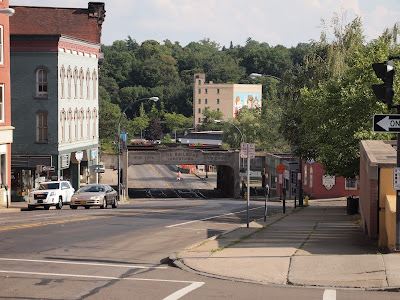 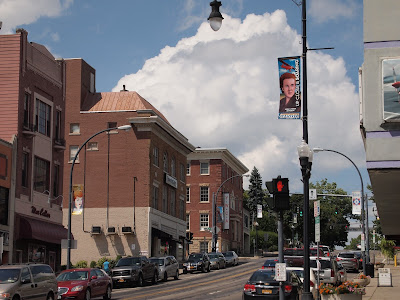 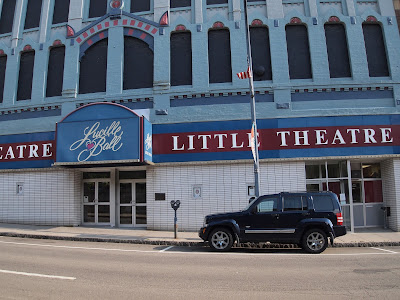